Ice can keep an amazing record of past climate on Earth. The problem is that we haven't found ice older that are reliably older than ~800,000 years. New research may push that number back to almost 5 million years. 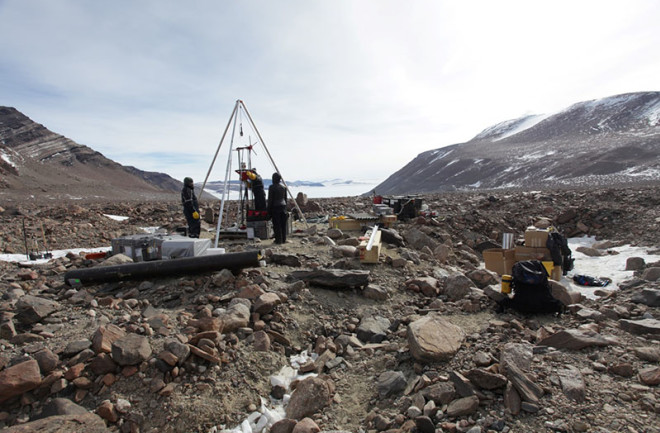 Most of us think of ice as ephemeral. It forms when it is cold and melts away once it warms up (or you dump salt on it). Yet, glaciers are evidence that ice can persist. The ice that forms glaciers takes centuries to form and may stick around for hundreds of thousands years ... and possibly much, much longer.

But that's not all! Not only is ice persistent, but it is an excellent record keeper. It can store information of all sorts of things in the Earth's atmosphere like particles (such as volcanic ash or wind-blown dust), aerosols (like sulphuric acid) or gases (like carbon dioxide trapped as bubbles). All of these data can then be used to make a record of the changes in Earth's climate in the long-term.

Why is that? To understand ice's book keeping abilities, we need to look at just how glacial ice forms. It isn't like the ice on your driveway, but rather something that forms over the course of decades to centuries. All it takes is cold and time.

Glaciers and glacial ice start with snow. In places that receive a lot of snow each year, some of that snow might not melt during the warmer summer months. Then, the next year's snow falls on top of that old snow ... and the process repeats year after year. The oldest snow heats and cools, maybe losing some mass from some melting (or sublimating -- going straight to gas), but the snow will condense into granules of ice called firn and then ice and finally glacial ice.

Glacial ice is as close to "rock" as water can get on Earth, forming an interlocking networking of ice crystals that can look like granite under a microscope. That glacial ice might have started as many feet of snow but gets reduced to less than an inch of ice. Within that layer remain any solid particles like ash, rock debris that fell on the ice, aerosol particles and whatever else was there. On top of that, air bubbles that sample the atmosphere when the snow fell get trapped in the ice. In the end, you get layer after layer of ice that records the annual snowfall on that glacier.

Glacial ice is weird. It is solid, but it can flow when on a slope and under pressure. Glaciers and ice sheets can be hundreds of feet to miles thick and all that pressure can deform the ice. The ice can flow as the ice on the bottom of a glacier moves downhill. That's how a glacier advances, when snow collects at the top of the glacier and the accumulation causes the bottom to flow. Conversely, as the ice melts towards the bottom of the glacier, it can retreat.

So, when scientists go to places like Greenland or Antarctica, they can cut a drill core of ice to read the past conditions on Earth. The ice near the top is more recent and the deeper you go, the older it is. Some of the oldest continuous ice cores on Earth contain annual records that go back 800,000 years.

Now, there are a number of caveats when it comes to reading the ice core climate record. If the ice has been heavily deformed, lower ice has been replaced by younger ice or the bottom of the ice has melted, then your record is much harder or impossible to interpret. You can also lose ice from the top by melting or sublimation, leaving older ice exposed at the surface. The question then becomes how can you determine the age of the ice beneath your feet?

One answer might involve looking at rare elements that form when quartz is hit by cosmic rays from space. A recent study in The Cryosphere by Marie Bergelin and colleagues attempts to use the sediment locked in ice cores to determine the last time that sediment was at the surface, thus how old the ice it is in might be. They may have ended up finding ice in the Ong Valley of Antarctica that is over 4 million years old.

Ice core sampled in the Ong Valley, Antarctica. There was a lot of variation in the ice cores that the team recovered, some sections were clear clean ice, while others were full of rocks and sediment. Credit: Jaakko Putkonen, United States Antarctica Program

Cosmogenic nuclides are isotopes of elements like beryllium, neon and aluminium. They form when cosmic rays from space hit minerals, causing elements to break and form these rare isotopes. Cosmic rays don't penetrate deep into rock or ice, so looking at the amounts of these elements in the surface of rocks and how these elements have decayed, you can model exposure and burial ages for the material.

The Ong Valley of Antarctica is a glacial valley deep in the Transantarctic Mountains. It has some active glaciers but also areas of old, stagnant ice that is covered by rocks and debris. Bergelin and her colleagues cut ice cores from this old ice to look at the sediment in the rocks to determine when they were buried, thus giving a minimum age of the ice.

Now, it can be messy. The ice in these valleys may not have melted (the average temperature in the Ong Valley is -11F (-24C). Instead, the ice sublimates in the sun, so young ice is lost over the years. In the Ong Valley, it might be over 70 feet (22 meters) of ice per million years. That's a lot of ice to be, well, vaporised.

In the ~30 foot (9.4 meter) ice core that was cut by Bergelin and her colleagues, they identified multiple batches of ice and surfaces. Using the cosmogenic nuclide measurements, they found exposure and burial ages of different surfaces. Some of the youngest ice was ~1.3 million years older. The deeper surfaces in the ice indicate they were buried in the ice ~3 million years ago and even deeper, ~4.3-5.1 million years ago.

To put that into some perspective, if these ice ages are correct, then the oldest ice formed from snows falling when Australopithecus was roaming Eastern Africa. The middle layers were forming close to when stone tools were first being used by our deep ancestors and the surface represents snow from the peak of Homo erectus.

The key for whether these new ages can be used for understanding past climate is complicated. Cosmogenic nuclide measurements can be fraught with peril based on how the samples were taken and what kind of assumptions were used. For these ages to be accepted, the scientific community will look closely at what the authors did to determine these dates.

If they are accurate, then looking at the materials trapped in the ice of the Ong Valley might give us insights into the Earth's climate that go back much further than we have been able to do with ice. It might also give us new tools to find even older ice elsewhere.