The Platypus Can Poison You 80 Different Ways 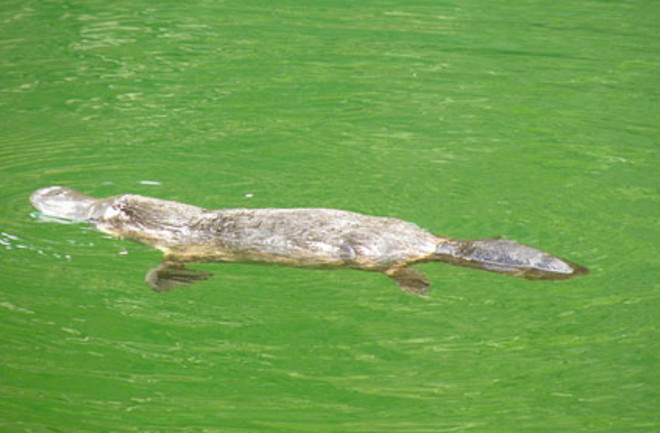 The platypus is a bit like a fruitcake. Shove a bunch of leftover genes in there, mix it up and send it to your relatives see what kind of animal you get.

That's kind of the approach evolution used when designing this odd creature's venom; scientists have just determined that the venom contains over 80 different toxins in 13 different classes. The poison can kill small animals, and can leave humans in pain for weeks. The venom is delivered through a barb on the male's foot--it's thought that the fellas use the poison during mating season to show dominance.

At least three of the toxins are unique to the platypus and the rest are strikingly similar to proteins from a variety of animals including snakes, lizards, starfish, and sea anemones. It seems that some of these toxins have evolved separately in different animal lineages to perform the same function, a process called convergent evolution. The study's lead author, Wesley Warren, told Nature News:

Warren says that this probably happens when genes that perform normal chores, such as blood coagulation, become duplicated independently in different lineages, where they evolve the capacity to carry out other jobs. Animals end up using the same genes as building blocks for venom because only a subset of the proteins the genes encode have the structural and functional properties to become venoms, he adds.

Learning more about how these toxins attack our system and induce inflammation, nerve damage, muscle contraction, and blood coagulation, could teach us how to design drugs with these effects (like coagulation for hemopheliacs), or their opposite (like new pain relievers).

We first started unraveling the platypus genome in 2008, when it was sequenced and revealed a long list of this marvel of monotreme evolution. The platypus lays eggs, but it also lactates and has hair like mammals, though it has no nipples. It has ten sex chromosomes, which resemble those of birds, but uses genes from mammals and reptiles to fertilize and lay its eggs, which are produced from only one of two ovaries (the left one). It also has fewer smell receptors than other mammals, but this diminished olfaction isn't that big of a deal, because it hunts by detecting its prey's electric current.

Not only does the animal itself mystify biologists, but its name has also become a bone of contention among linguists, says Neatorama:

Pluralizing the creature has proven to be quite a problem not for just laymen, but even to scientists. There is still no universally accepted plural to the word. Most people believe the plural form should be “platypi,” but the real Greek plural would be “platypodes.” Scientists stay away from both of those terms and prefer to use “platypuses” or just “platypus” no matter how many in question.