The placebo effect affects pain signalling in the spine

The placebo effect - the phenomenon where fake medicines sometimes work if a patient believes that they should - is a boon to quacks the world over. Why it happens is still a medical mystery but thanks to a new study, we have confirmation that the spine is involved. 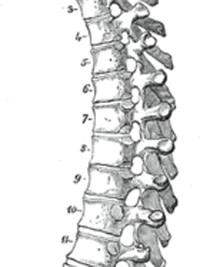 Frank Eippert from the University Medical Center Hamburg-Eppendorf used a technique caled functional magnetic resonance imaging (fMRI) to scan the backbones of volunteers as they experienced the placebo effect. Eippert heated the recruits' forearms to the point of pain and he gave them cream to soothe the sting. The creams were all shams with no pain-relieving properties, but only half of the recruits were told this. The others were told that they'd been given lidocaine, an anaesthetic.

Sure enough, the volunteers who used the alleged "anaesthetic" felt about a quarter less pain than those who were aware that they were using an ordinary cream - the placebo effect in action. But Eippert also found that the activity of neurons in the spine (specifically an area near the back called the "dorsal horn") was also strongly allayed.

The dorsal horn is the gateway of pain. It controls the passage of pain impulses from our senses into our central nervous system. Eippert's results provide direct evidence that our belief in the effectiveness of a fake medicine can close this gate, blocking pain signalling in this all-important area.

Of course, it's still unclear how this happens, but the answer probably lies with opioids, natural pain-relieving chemicals used by the brain that have been linked to the placebo effect for over 30 years. These chemicals are probably responsible for closing the dorsal horn's gate.

Eippert's results build upon, and support, earlier researchlinking the spine to the placebo effect. Nonetheless, it's very unlikely that this is the only explanation behind the mysterious placebo effect. For a start, people who suffer from fibromyalgia - a condition characterised by long-term pain all over the body - can still experience in the placebo effect but in a way that doesn't involve the spine.