The Pheromone That Could Save Pine Forests From Oblivion

To save forests from a deadly beetle epidemic, scientists are using the insects’ own chemicals against them. 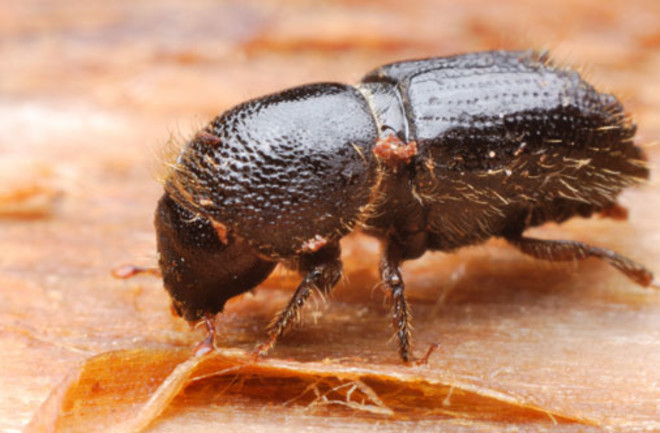 Vast swaths of reddish- brown pines dominate the landscape on the trails of Yellowstone National Park in Wyoming and down ski runs around Aspen, Colorado. The morbid color, by now a staple of the Rockies, comes not from fire or some exotic disease but from an insect no larger than a grain of rice—the bark beetle.

North American foresters have tracked the invasive bark beetle for centuries, but in the last 15 years its numbers have exploded. Beetles are now wiping out trees, even whole forests, at an unprecedented pace; they ravaged 9.2 million acres of forest in the western United States in 2010, according to the Forest Service, three times as much as that destroyed by fire. In British Columbia, the devastation over the last decade covers an area larger than Florida.

Until recently there was virtually nothing landowners could do to protect even small parcels of forest from bark beetles. But after a half century of detective work, a small group of scientists has come up with a novel and surprisingly effective means of defense: hijacking the beetles’ sense of smell.

Like ants and honeybees, beetles communicate via scented chemicals called pheromones, one of which warns the insects to stay away from particular trees. Now researchers are dispersing this pheromone, called verbenone, placing a molecular shield over thousands of acres of hardy green pines in western ski resorts, nature reserves, and campgrounds. “Verbenone is just fantastic,” says David Wood, a retired forest entomologist at the University of California, Berkeley. “It’s the only effective treatment, period.”

Tree Eaters On The Loose

Bark beetles, a group of species that includes the mountain pine beetle, western pine beetle, and pine engraver, have thrived in North American forests for at least 12,000 years. The beetles kill trees in the course of their reproductive cycle: Adult beetles bore into the trunk and carve out tunnels called galleries, where the females lay eggs. When beetle larvae emerge, they feed on the tree’s tissues before flying off to colonize another tree and restart the cycle.

Records of specific beetle outbreaks, most of them localized and short-lived, date back to the 1880s. Foresters have long tried to stem the tide. Failed approaches included cutting down infected trees, spraying pesticides, even hooking up trees to car batteries to electrocute the beetles inside.

In 1955 David Wood took on the case. A native of rural Elmira Heights, New York, Wood became fascinated with forest insects when he noticed dead elms killed by a scourge of beetle-borne disease in his hometown. In graduate school at Berkeley, he worked under a professor trying to combat bark beetles with pesticides like DDT and chlordane. “All this stuff is banned now,” Wood says, “but back then they were considered magical.”

As part of his research, Wood drove two hours east to the Sierra Nevada pine forests to study trees ravaged by the bark beetle Ips paraconfusus. During outbreaks, millions of the insects descend at nearly the same time, gnawing tunnels en masse. They kill the trees by disrupting the flow of water and nutrients from the roots.

Wood wondered: How had all those beetles synchronized their arrival? He suspected it had something to do with the shavings left behind as they dug. Perhaps the beetles excreted some kind of chemical signal that combined with the tree’s tissues to form an irresistible scent for other beetles. Wood’s mind churned. If he could identify these chemicals, then perhaps he could use them as the lure in a trap, eliminating the need for costly pesticides.

In 1957 Wood ground up some tree tissue, known as phloem, and took it back to his lab. He built a tabletop chamber and placed female Ips beetles in the center, surrounding them with clumps of phloem. In some of those clumps he placed male beetles. All the females flocked to the male-inhabited phloem, completely ignoring the other clumps. Wood had discovered that male Ips beetles secrete a chemical into phloem that attracts potential mates. Two years later a pair of termite researchers came up with a name for such a social chemical—pheromone.

Bark beetles gouge out elaborate tunnels into trees to rear their young. | Shutterstock

For Wood, the next step was isolating the pheromone that beetles secrete into the phloem. In 1963 he teamed up with chemist Robert Silverstein of the Stanford Research Institute. They bred hundreds of thousands of Ips beetles in the lab and collected the shavings they left behind—a combination of phloem and excrement. Silverstein isolated compounds from the material and Wood tested them by placing beetles at one end of a small, makeshift wind tunnel made from a plastic tube. At the other end of the tubing he attached a hair dryer that blew the chemicals toward the beetles. The idea was to see whether beetles would be attracted enough to trek upwind.

By 1966 Wood and Silverstein had identified a mixture of three chemicals that attracted Ips beetles. Subsequent fieldwork revealed that the first beetles entering a tree released these chemicals, which in aggregate formed the pheromone. Later arrivals did the same. The more beetles that came, the stronger the pheromone’s pull, until a forest was destroyed.

With the help of Forest Service entomologist William Bedard, Wood built enormous glue traps to test the chemicals as bait: six-foot-high sheets of nylon coated with Stick-Em adhesive and the attraction pheromone. In 1969 they set the traps throughout 25 square miles of pine forest in Bass Lake, California, in the first attempt at pheromone-based bark beetle control. Unfortunately, the lures worked too well. They killed countless beetles, but the ones that survived ravaged nearby trees—not a selling point for landowners hoping to save their timberland.

Undeterred, Wood turned his attention to other pheromones. In 1980 he began studying one called verbenone that other researchers had isolated from beetle guts more than a decade earlier. He added it to some of his traps and noticed that beetles suddenly stopped coming. Instead of drawing a deluge of beetles, verbenone repelled them.

Entomologists soon discovered that beetles use verbenone as a no-vacancy sign in occupied trees. Once thousands of beetles storm a tree and burrow their galleries, they want to lay eggs and let their offspring thrive. So they secrete verbenone, which overrides the attraction pheromones and signals outside beetles to find another tree.

Suddenly researchers had a new approach to pest control: Drive the beetles away by tricking them into thinking the trees were already occupied. John Borden, who studied under Wood, led the way in the 1980s by developing plastic pouches filled with verbenone. But he had trouble designing a prototype that could steadily release enough pheromone to keep beetles away, and his research stalled.

That changed abruptly in 1998, when mountain pine and western pine beetles began a vicious attack on evergreens from British Columbia to Baja California. “The beetles erupted like biblical hordes of locusts,” Borden says. No one knows exactly why. Borden points to old, dense forests that are vulnerable to attack, combined with climate change, which has allowed beetles to survive through warmer, drier winters. Whatever the reason, beetle control shot up the environmental priority list, and verbenone research was back in business.

Soon after the beetle explosion began, another Wood protégée, entomologist Nancy Gillette of the Forest Service, got a call from Pennsylvania-based Hercon Environmental, a company that had developed a pheromone-releasing plastic flake to control gypsy moths on the East Coast. It hoped to transfer that technology to bark beetles. After several years of tinkering, Gillette and Hercon came up with a formula that significantly reduced tree mortality in test forests in California and Idaho. “The flake is essentially a peanut butter sandwich,” Gillette says. “It’s plastic at the top and bottom with verbenone in the middle.” The flake, which releases the pheromone along the edges, can be dispersed by helicopter over tens of acres at a time.

Since 2004 verbenone flakes have spared pines in the resort town of Big Sky, Montana, and the campgrounds of Lake Chelan in Washington State, cutting tree mortality rates by up to 90 percent. Gillette recently led a project to protect trees that serve as nesting sites for the endangered spotted owl. Borden joined Contech, a Canadian company that designed an improved version of his pouch, about 3,000 of which were stapled last year to more than 100 acres of pines on Smuggler Mountain, a popular outdoor destination near Aspen.

Verbenone is far from perfect. It must be applied just before young beetles emerge in spring to search for new trees to colonize, and there is no foolproof way to know when that will happen. The treatment is also costly. Hercon’s flakes are about $150 per acre, and helicopter rental to disperse them is another $20 per acre. “It’s too expensive to use on hundreds of acres,” Gillette says.

That may soon change. Scientists at Oxford University are exploring a means of churning out pheromone inside genetically modified microbes, a manufacturing method that would dramatically lower cost. Other researchers are looking into new methods of olfactory trickery. Gillette recently tested a plastic vial that emits green-leaf chemicals that smell like fresh-cut grass; it convinces beetles they are in an undesirable meadow rather than a heavily wooded forest.

Ultimately, what is needed is a pheromone treatment cheap and effective enough to be practical for both small, privately held acreage and for the vast stretches of public forest that are rapidly transforming from vibrant green to that disturbing shade of brown. “It is really horrifying to see the destruction,” Gillette says. “We’re doing everything we can to limit the damage.”

Daniel McGlynn is a California-based writer.