The Palmdale Bulge: A Geo-Crisis That Likely Never Existed 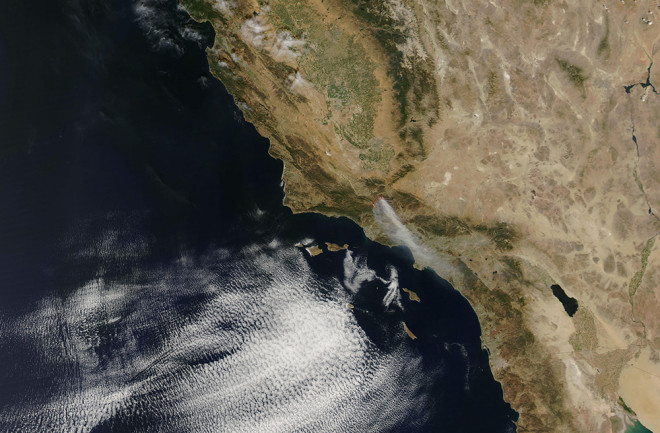 'September 2006 MODIS image of southern California taken by the Aqua satellite. <a href='https:

The revolution in how we survey and image the surface of the Earth has had profound impacts on the geosciences. This shouldn’t be a shock to anyone as that’s what geoscientists do — study the Earth — and as we get more and better data on the planet and its surface, the better our understanding will become (and the more questions we can ask). Few technological leaps have been more important to geosciences than satellite imaging of the Earth.

That is more than just taking cool pictures of the planet, but also collecting location and elevation data of the surface … and being able to do so in sub-centimeter precision and repeatedly over intervals of days (or less). Combine that with land-based tools like LIDAR (Light Detection and Ranging), and suddenly we can notice very small changes in the Earth’s surface. Dump all this data in a geographic information system (GIS) and we can really start picking apart almost every up and down and slide and whatever comes along. Add high-powering computing to model the physical processes and the geosciences of 2018 would look like straight up science fiction to a geologist from 1975.

Oh, but as that implies, it wasn’t always so good. Before this level of precision and accuracy in mapping the Earth’s surface, geoscientists had to rely on tools like optical leveling, tilt-meters and other more analog methods for seeing how the Earth’s surface might be changing. This is not to say that amazing maps weren’t made, but they took a lot of time and people-power to construct … and was we’ve found, they weren’t always right.

That gets us to the Palmdale Bulge.

Back in the mid-1970’s, the Palmdale Bulge was all the rage, but even today, no one is quite sure if it was even real. It was a supposedly an uplift near Palmdale near Los Angeles where over sometime in the late 1960’s and early 70’s, the land rose 30-45 centimeters (11-17 inches). That is a lot of movement for what might have been only 5-8 years of change. The “bulge” appeared to cover almost 83,000 square kilometers (~32,000 square miles) of real estate. Since the whole Los Angeles area is criss-crossed with faults related to the San Andreas fault system, it was thought that maybe this uplift was a sign that a huge earthquake was going to happen … and soon.

A lot was riding whether the bulge was real as Los Angeles was growing and people lived in the area. Evidence of a big earthquake in the works would cause real estate values to plummet. So, these finding were carefully scrutinized and the closer geologists looked, the more it seemed like something wasn’t right with the bulge.

'Leveling at the Washington Monument. <a href='https:

Leveling at the Washington Monument. NOAA.

The problem was centered around how the bulge was discovered. In that era, changes in the Earth’s surface where mapped by transit and leveling — taking marked rods and sights, marching up and down the same route for 10s of kilometers and trying to calculate the elevation change between your sight locations. It might seem very analog, but it was surprisingly accurate when it works, down to less than a centimeter of error over many kilometers.

However, there were two places where geologists thought errors might lie. The first was the accuracy of the rods themselves. They are certified by the National Bureau of Standards, but still, rods with inaccuracies were identified in some of the previous surveys. Those previous surveys were vital as they set the baseline from which to compare to see this supposed uplift. If the rods were inaccurate and the elevations were wrong, then the bulge might not be real.

The other source of error was how the air that you sight through could cause inaccurate readings. Hot and cold air stratify and bend light differently, so in the hot Los Angeles area, it could be easy to introduce errors if the conditions were such that light would bend when looking at the other rod, sometimes up to 60 meters away. Previously, it was thought this refraction didn’t cause much issue until it was realized that those experiments were run in Finland … very different than Palmdale.

Combine these two potential errors, and suddenly the up to 45 centimeter bulge over tens of thousands square kilometers became a few centimeters in a much more localized area near the San Andreas fault. This new result was what you might expect for a tectonically-active area like the Los Angeles Basin and suddenly the Palmdale Bulge was gone…but it took into the early 1980’s for all these errors to be parsed out of the data.

'Uplift observed from 1995-2001 on South Sister in Oregon via InSAR observations. <a href='https:

Uplift observed from 1995-2001 on South Sister in Oregon via InSAR observations. USGS.

Today, new methods of satellite observation make it much easier to see small changes to the land surface with much more accuracy. Back in 2001, a “bulge” was seen on the side of South Sister in Oregon. This bulge was not found via sight and transit but rather satellite imaging called InSAR, where detailed elevation maps of the Earth’s surface were compared to see if it changed. This bulge was ~22 centimeters (9 inch) of uplift over 22 kilometer (10 miles) diameter area on the volcano’s side. The bulge continued to grow very slowly until the early 2010’s and now has appeared to have stopped.

It is through this highly accurate satellite imaging that we could spot such a change in a mountainous and forested area like South Sister. Bulges (and depressions) near volcanoes have now been identified all over the planet. Many times these changes are caused by magma entering the volcanic system kilometers beneath the surface. Maybe they are signs of a new eruption in the works, but likely they are just everyday business at volcanoes. However, without our new remote sensing techniques, we might not even notice them happening … or be able to assess the validity of such claims.

This is why it is important to not get worked up if you see stories about inflation, deflation or bulges at places like active volcanic regions. We don’t have good baselines of data for many regions, so we don’t know how much the naturally rise and fall over years to decades. Jumping at every observed change could lead to misinterpretation, panic and distrust. So, even if the land surface might change a little, it could mean very little has actually changed. We are just finding out a lot more about how the Earth works with our new methods and technology.