The Palm Tree That Waters and Fertilizes Itself 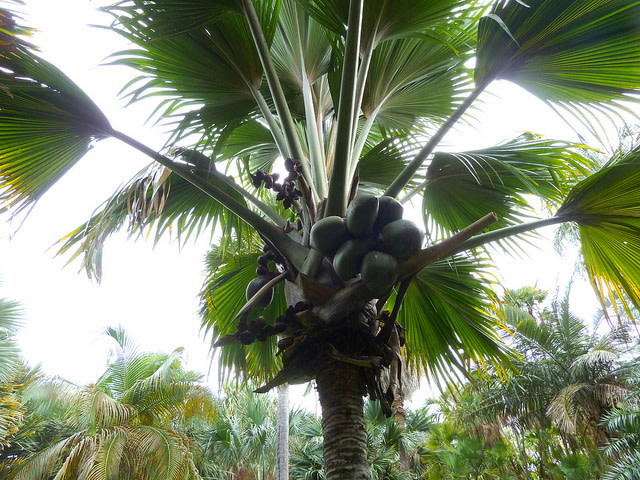 Even the most dismal gardener wouldn't mind taking charge of a plot of Lodoicea maldivica. This palm tree knows how to water itself. It even adds fertilizer. As a result, it rules the forest, turning a bad soil situation into seeds the size of a four-year-old human. Lodoicea maldivica is commonly called the coco de mer palm. "Commonly" might be the wrong word, though, since the tree grows on exactly two islands in the world, in the Seychelles. It roots itself in soil made from weathered granite, with barely any nutrients. Sitting on this starved bed, it first grows leaves, sending them on tall stalks toward the forest canopy. This juvenile stage may last for decades. When it reaches adulthood, the palm finally starts to grow a trunk, pushing that crown of fronds up from below. Male trees make pollen in small flowers that grow on long, sausage-shaped stalks. Female trees fertilized by that pollen grow enormous fruits containing seeds that can weigh as much as 18 kilograms each. That's nearly 40 pounds. How does the coco de mer transform its meager resources into the largest seeds on Earth? It uses its unique architecture to collect rainwater and nutrients and funnel them back to its roots. There are other plants that collect and store water, says Christopher Kaiser-Bunbury, a researcher at TU Darmstadt in Germany. Bromeliads, for example, and some desert plants. "But to our knowledge coco de mer has absolutely mastered the art," he says. It's quite obvious to anyone standing near the tree in a rainstorm what's happening, Kaiser-Bunbury says. The large leaves catch water and channel it to their stalks, or petioles, which are scoop-shaped like rain gutters. The water runs down each gutter to the base of the petiole, which is split where it attaches to the trunk. Water pours through these gaps and "gushes down the trunks," Kaiser-Bunbury says, straight to the base of the tree. 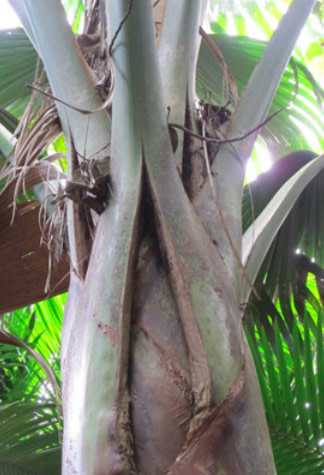 The petiole attaches the leaf to the trunk and funnels water through a split in its base. But what lands at the tree's roots isn't plain rainwater anymore. On its way, the water sweeps up the nutrient-rich droppings of birds, snails and lizards that live on the tree. It also collects stray pollen, which may have come from other palm trees or the same tree—in which case the tree can recycle the nutrients it put into that pollen. Kaiser-Bunbury and his coauthors went to the Seychelles and took an in-depth look at a stand of coco de mer palms to find out just how well this recycling system works. They sampled trees' leaves, trunks, fruits, and male flowers, calculating the mass of each part of the tree. Then they compared the concentrations of nutrients in each tissue to see how the palm tree allocates its resources. In the soil, they measured nutrients and moisture. The researchers also monitored trees for four years to track their growth. A coco de mer grows sluggishly. The scientists found that each tree manages a little more than one new leaf per year. Female trees also grow about one fruit each year; the fruits take six years to develop fully. (In terms of slowness, that green banana in your fruit bowl has nothing on the coco de mer fruit.) The tree's leaves, the researchers found, have barely any nutrient content. They hold about a third as much nitrogen or phosphorus as the leaves of other woody plants in the Seychelles. (This may be why insects and other nibbling animals ignore them.) Most of these more nutritious plants are growing in the same lousy soil as the coco de mer. But while they send resources to their leaves, the coco de mer opts instead to invest in its fruit and seed. During a rain shower, the scientists attempted to measure the water running down trees' trunks. "Although it was a small shower, so much water flowed down the trunks and petioles that some collectors overflowed," they write. Nearly all the rain that fell on a tree ended up less than a meter from the base of its trunk. The trees acted as giant, highly efficient funnels. And this, unsurprisingly, affected the moisture and nutrients in the soil below. At the base of a tree, the researchers found more than three times as much phosphate as in the soil around other native plants. The soil was moist within a meter of the tree, but drier at two meters away. The researchers could also see plant debris around the base of the tree that was carried there by rainwater—this debris could include old fruits or male flowers, which the tree recycles too. They also found "abundant" palm pollen in the soil. If there is a more efficient system anywhere in the plant kingdom for gathering and recycling resources, Kaiser-Bunbury says, "it waits to be discovered." This efficiency has made the coco de mer palm dominant in its ecosystem. It lives in forests that are almost 100 percent Lodoicea maldivica—no other tree lives among the palms. "Every animal and plant in this ancient forest is in one way or another connected with (and dependent on) coco de mer," Kaiser-Bunbury says. There's a species of gecko that lives nowhere but the coco de mer forest. New species of cricket and frog were recently discovered in the palm trees' leaf litter. With climate change, dry spells in the Seychelles may become more extreme. This threatens the whole ecosystem of the palm forest. If the coco de mer's pollinators go extinct, for example, the trees will follow. Yet the palms themselves are built for bad conditions; they may be better prepared than most for what's to come. "I've been working with coco de mer for the last eight years," Kaiser-Bunbury says, "and this plant comes up with new surprises all the time." 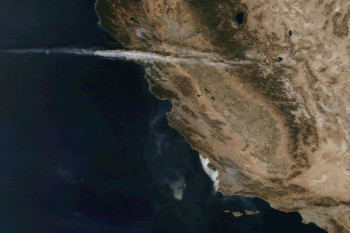 EnvironmentNine Days of California Infernos, as Seen from Space
Recommendations From Our Store