The Other Panda’s Thumb 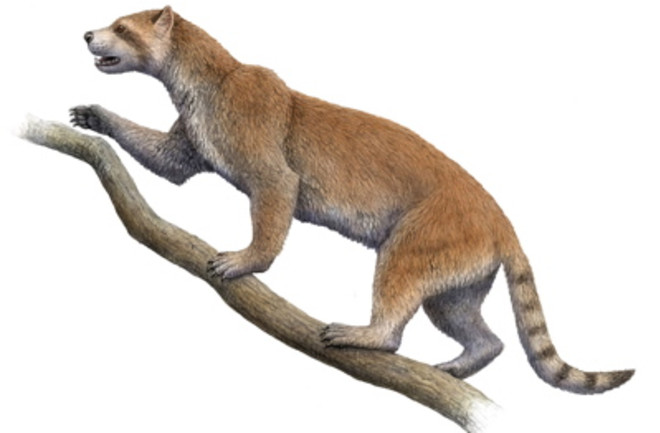 If you could travel back to Spain about ten million years ago, you'd have no end of animals to watch, from apes to bear-dogs to saber-tooth tigers. With so many creatures jockeying for your attention (and perhaps chasing you down for lunch), you might well miss the creature shown here. Simocyon batalleri was roughly the size and shape of a puma, although its face looked more like a raccoon's. If anything were to draw your attention to Simocyon, it would probably be the animal's gift for climbing trees. Most big carnivorous mammals of the time were restricted to the ground; some may have been able to climb up tree trunks and onto bigger boughs. But judging from its fossils, Simocyon could have climbed trees out to their slender branches. It could do so because, unlike other carnivores, it had thumbs that it could use to grasp branches much like a monkey would. Those thumbs turn out to have a fascinating story to tell about the tinkering habits of evolution.

This story is a sequel of sorts. Part One was an essay that Stephen Jay Gould published in Natural History in 1978 called "The Panda's Peculiar Thumb." It's a classic example of Gould's skill at making a provocative argument about evolution with a flair so elegant that it could draw in the least scientific reader. (If you haven't read it, you really should check it out, either in Gould's collection of essays, The Panda's Thumb, or here. And also be sure to read the blog of the same name!)

In the essay, Gould complained that textbooks liked to illustrate evolution with examples of optimal design, such as insects that exquisitely mimicked a dead leaf. "Odd arrangements and funny solutions are the proof of evolution," he argued. Darwin himself spent a lot of effort uncovering the strange contortions by which organs changes shape and took on new functions. And to Gould, the thumb of the giant panda was the epitome of a funny solution.

Before a giant panda eats a piece of bamboo--its favorite meal--it grabs the shoot between its flexible thumb and finger and strips off the leaves. But this useful thumb is not really a thumb at all, at least in our sense of the word. Pandas descend from carnivorous mammal ancestors, as reflected in the many traits they share with bears, dogs, and other relatives. For one thing, its true thumb is lined up with its other fingers. What looks like its "thumb" is actually a wrist bone (the sesamoid) that evolved until it was so big that it stuck out to one side of its forepaw. The muscles that control the bone have become rearranged so that now it can move much like our own opposable thumb. Gould pointed out that the corresponding bone in the panda ankle is somewhat oversized, which he suggested was the result of genes that controlled the growth of the sesamoid in all its limbs. The large size of its ankle bones serve no function. Instead they're merely the byproduct of natural selection acting on other parts of the panda body.

I find Gould's essay a little peculiar to reread today. It's as if someone had drawn a picture of the head of a dime, and Gould said, "Outrageous--it's the tail that makes the dime!" Scientists who study the evolution of optimal design don't deny that evolution may be optimizing things with weird origins and which may have once had other uses. The wings of different species of bats are exquisitely well adapted to different ecological niches--open spaces, dense forests, and so on. But the biologists who study those wings would not deny that they originated from the forelegs of mammals, or that an entirely different sort of wing might actually do a better job. But my opinion may be colored by the fact that I'm reading the essay in 2005. Perhaps what seem like straw men today were genuine points of view in the 1970s. Of course, it's largely thanks to Gould that such overly adaptationist points of view are not so common today.

There's an interesting omission to "The Panda's Peculiar Thumb": the red panda. This bushy-tailed creature is the size of a small dog and climbs in trees. Found in East Asia, it eats bamboo, along with lichen, acorns, and even bird eggs. It earned its name from the similarities it bore to giant pandas. Those similarities include a false thumb that is actually an exaggerated sesamoid bone in the wrist.

More detailed studies raised doubts about whether the two pandas were closely related. But for a long time scientists had a difficult time determining their kinship. The picture has cleared up dramatically in the past few years thanks to large-scale studies of mammal DNA. These studies (such as this one and this one) indicate that giant pandas and red pandas are only distantly related. Their common ancestor lived 40 million years ago. One lineage gave rise to bears, including giant pandas. Another lineage gave rise to red pandas as well as skunks, raccoons, and weasels.

This research casts the panda's thumb in an interesting new light. It apparently evolved independently in two different lineages of carnivorous mammals. This is fascinating for a couple reasons. Two independently evolved sesamoid thumbs hint that carnivores are so constrained by their anatomy that they have only one pathway by which they can evolve something that will work like an opposable thumb. It's also intriguing that these two thumbed creatures also share a taste for bamboo. That coincidence may suggest that the same ecological shift from meat-eater to bamboo-eater drove the evolution of a bamboo-processing thumb. It's the sort of hypothesis that evolutionary biologists can test. They test it by digging up fossil relatives of living red pandas or giant pandas.

In a paper that was published on-line this week by the Proceedings of the National Academy of Sciences, a team of paleontologists describe Simocyon batalleri, which turns out to be an ancient relative of red pandas. And like living red pandas, it had a thumb made out of a sesamoid bone. But its jaws, teeth, and other traits were not the sort you find in plant-eating mammals. Instead, it hunted or scavenged prey.

In the red panda lineage, in other words, the panda's thumb evolved before red pandas began to use it to strip bamboo. The researchers suggest that the thumb may have originally evolved for a different function: grasping branches. Simocyon may have used this skill to escape from bigger, faster predators. It might have even stolen dead prey cached in trees by saber-toothed cats and retreated out of range. Only after the panda's thumb evolved in a tree-climbing predator did some descendants co-opt it forfeeding on bamboo. In this respect, red pandas appear to have taken a different evolutionary path than giant pandas. No fossil of panda-like bears has shown any trace of a panda's thumb. Unlike the case with red pandas, the evolution of thumbs in giant pandas may have been tied to a shift from meat to plants.

Unfortunately, Stephen Jay Gould is not around to take delight in this new discovery (he died in 2002). I'd wager that he would have been particularly tickled by the fact that red pandas now embody not one but two of the concepts Gould championed in his career. He argued that evolutionary biologists must always remember that a structure that has one function today may have actually evolved millions of years ago for a different function altogether. Feathers, for example, don't seem to have evolved initially for flight. Some scientists liked to call these structures preadaptations, but Gould thought that term smacked of some kind of foreknowledge, which evolution cannot have. He preferred the term exaptation. The red panda's thumb turns out to be a striking exaptation--a tool for grasping branches that was turned into a tool for eating plants. It's an exaptation we humans can certainly appreciate. After all, our primate ancestors used their opposable thumbs to clamber around branches, perhaps alongside some of the ancient relatives of red pandas. While red pandas used their opposable thumbs to eat plants, hominids used them to make stone tools. Civilization and all the rest followed suit.