Many of our planet's features are thanks to tectonic plates bumping and grinding together. Two new studies revealed that this movement may have kicked off earlier than geologists previously thought. 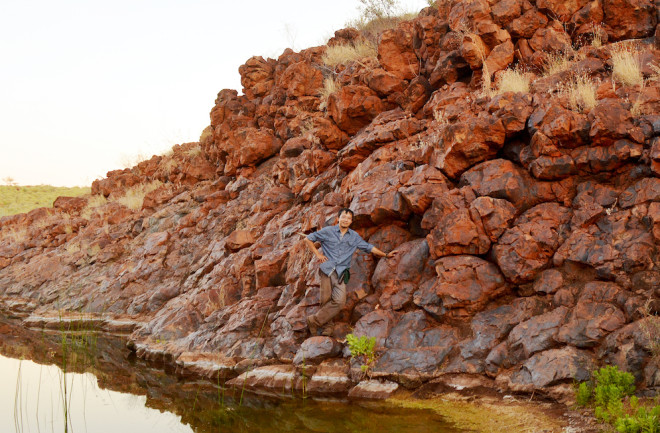 This article appeared in Discover’s annual state of science issue as “A Rocky Start.” Support our science journalism by becoming a subscriber.

To many, Earth feels like a static place. The rock beneath our feet seems solid and unchanging. Yet, over billions of years, the surface of the Earth has actually changed dramatically and its interior composition altered, all thanks to plate tectonics. Shifting plates of crust move on thick layers of flowing — but still solid — rock called the mantle. This constant shifting not only moves continents, but also recycles material from the surface back towards the planet’s deep interior.

Scientists are continually investigating exactly how long the plates have been active. Did they start shortly, geologically speaking, after our planet’s formation, or billions of years later? If that movement started early, was it anything like what we see today? Scientists have proposed strange theories like drip tectonics, where plates sag into the mantle like dripping fat, and plume tectonics, where superheated jets of solid mantle rise up, to explain Earth’s early history.

Two new studies bring us closer to understanding what might have happened in those first billion or so years. They tackle the question with different approaches: one chemical, one magnetic.

The former uses lava that erupted along mid-ocean ridges to measure how much of the ocean’s crust has been recycled over Earth’s history. This study, by National High Magnetic Field Laboratory geochemist Shuying Yang and her colleagues, was published in June in Science Advances. When an ocean plate collides with a continent, the edge of the ocean plate can be driven back into Earth’s rocky but deformable mantle, which stretches from tens of miles beneath our feet to over 1,800 miles down. This is called subduction. A modern example is the Cascadia Trench, which runs from California to British Columbia, where the Juan de Fuca Plate is shoved underneath North America.

As this ocean crust gets worked back into the mantle, it results in a unique composition of magma and sediment. This blended mantle carries the chemical signature of that recycled crust — and when it eventually travels back up and emerges as lava, researchers can use that signature to calculate the fraction of recycled crust present in the hardened mantle before it erupted. “That quantity turns out to have major implications for understanding how long recycling has been going on for,” says geochemist Munir Humayun, a co-author of the study. “We have [helped] put a handle on the history of plate tectonics.”

Using data collected from rocks around the globe, the researchers estimate that 4 to 6 percent of the Earth’s mantle is recycled ocean crust. Based on rates of subduction, plate tectonics would need to have been active for 4 billion years to account for that amount of recycling — at least a billion years earlier than prior research has suggested.

The findings tell us about composition of the Earth’s crust, but can’t tell us exactly where it has gone over time. Understanding the motion of the crust is another clue to plate tectonics’ origins. A second study, led by Harvard University geologist Alec Brenner and others, and published in April in Science Advances, tries to fill that gap.

Brenner and his colleagues looked at magnetic minerals in rocks to map where that rock has been relative to the Earth’s magnetic poles. Minerals like magnetite will align with Earth’s magnetic field when rock crystallizes, so by dating the rock and examining the alignment of these minerals, they can determine its past location.

The researchers measured the alignment of magnetic minerals in basalt lava that erupted over 3.1 billion years ago in western Australia. They found that when you compare the past location of one lava formation, revealed by its magnetic minerals, with that of nearby rocks that are around 170 million years older, the chunk of land needed to move, on average, at least 1 inch every year during that 170-million-year period. “[This] shows that plate tectonics were shuffling the crust around 3.2 billion years ago, at least 400 million years older than previously known,” says Brenner.

Together, both of these studies push back the boundaries of plate tectonics. “[This] suggests that our earliest ancestors took advantage of the same geological environments that we can access on the modern Earth,” says Brenner. In other words, our planet’s first single-celled organisms may have arisen on an Earth more geologically similar to today’s than we once thought.