Pangea wasn’t the first, and it won’t be the last. Take a look ahead at the shape of the world to come. 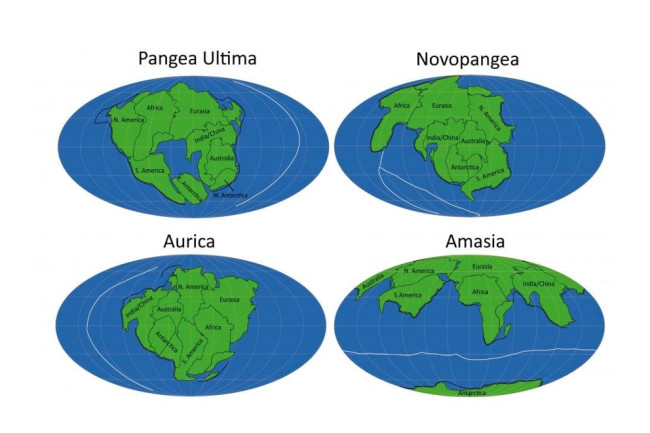 Unfathomable ages ago, the continents of the Earth were not in their current places. A single enormous landmass dominated the globe, a supercontinent retroactively called Pangea (or Pangaea, if you prefer; either way, it's Greek for “all Earth”). Through a long and infinitesimally slow process of fracturing and continental drift, we ended up with our familiar seven continents.

That’s the story as you probably learned it — but it’s not the whole story. From our human viewpoint, the current world map seems a fait accompli. But plate tectonics is a continuous process; even now we are undergoing long-term changes whose progress we cannot perceive — a cycle that plays out over hundreds of millions of years. There were supercontinents before Pangea; and unfathomable ages hence, there will likely be others.

Movers and Shakers of the Revolution

Sixteenth-century cartographer Abraham Ortelius was the first to envision the coastlines of America, Europe and Africa as fitting together like puzzle pieces. Geological similarities in the bedrock further suggested that these continents were once part of a single mass. Geophysicist and meteorologist Alfred Wegener in the early 1900s elaborated on this idea, calling it “continental drift.”

But because Wegener’s model lacked a plausible mechanism for continental movement, most thinkers of the age didn't catch his drift. Indeed, Wegener's idea was largely dismissed until the 1950s, when British geologist Arthur Holmes proposed that convection in the Earth’s mantle drove spreading in the ocean floor.

Holmes’ insights inspired subsequent research among physicists, geologists and seismologists worldwide. By the late 1960s, mounting evidence had moved the consensus toward acceptance of the new science of plate tectonics. So swift and complete was this paradigm shift that some called it “the plate tectonics revolution.”

In highly simplified terms, continental drift occurs because only a relatively small proportion of the Earth’s substance is solid matter. The surface of the planet, both the dry land and the ocean floor, actually consists of rocky plates, each about 100 kilometers thick. This, the lithosphere, rests upon a layer of superheated rock, the asthenosphere. At the boundary between the two regions, where temperatures are around 1300° C, the mantle acts as a dense, highly viscous fluid, buoying the rigid crust. Pieces of the lithosphere — seven major plates and dozens of microplates — glide ever-so-slowly across the asthenosphere like a puck across an air-hockey table, moved by a combination of thermal convection, gravity and rotational forces.

The motion of these continental plates likely began about 3.5 billion years ago, producing numerous configurations through the ages, the details of which are largely speculative. Early supercontinents formed while dry land was still emerging from the seas, so they were far smaller than Pangea. The first of these, Ur — at the time Earth’s only landmass — formed 3 billion years ago; its remains constitute parts of Australia, India, and Madagascar. Over the next 300 million years, additional land formed through volcanic action, clustering with Ur to form Kenorland. After 100 million years, Kenorland broke apart, and the cycle began anew.

As new tectonic plates formed, they collided with existing landmasses, forming a series of ever-larger supercontinents: Columbia, then Rodinia and most recently Pangea, which formed about 335 million years ago, stretching from pole to pole along the longitudes of the mid-Atlantic.

What will the next Pangea look like? It's hard to tell. The human-observable effects of plate tectonics are minuscule — an annual displacement of around 4 centimeters, the width of a honeybee’s wingspan — so good luck tracking that with a calendar and a ruler. Nevertheless, researchers have theorized a number of possible outcomes. 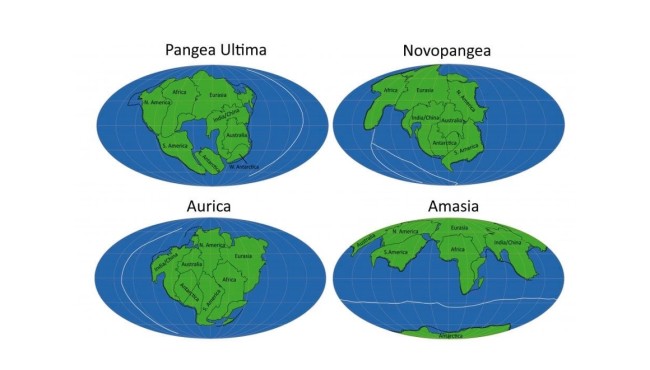 In 1982, American geologist Christopher Scotese posited Pangea Proxima — literally “the next Pangea.” (Scotese originally called his hypothesis Pangea Ultima, meaning "the final Pangea,” before, finally, hedging his bets.) From his study of the formation of previous supercontinents, Scotese imagines a ring-shaped landmass. In his scenario, the Americas butt against Africa, which tilts eastward to dock with Eurasia; the latter has flipped perpendicular. South America and India form the coastline of an inland sea.

The next decade saw American and South African researchers proposing an alternative arrangement called Amasia. Extrapolating from the gradual widening of the Atlantic, they envision the Pacific Ocean “closing” as the Americas drift westward, fusing with Australia, then pivot clockwise around to Siberia; Eurasia and Africa retain their current longitudinal position, but shift northward, with the whole mass circling around the North Pole. Antarctica remains a separate landmass.

In the late 1990s, British geophysicist Roy Livermore postulated a configuration that he dubbed Novopangaea. Here, the Americas form its eastern edge, their western coastlines swinging together like pincers to embrace the docked mass of Antarctica and Australia at the hub. Africa legs off to the northwest.

A recent projection, Aurica, proposed in 2016, builds on research from the American Geophysical Union correlating ocean tides with the supercontinent cycle. Aurica is roughly similar to Novopangaea, but posits a rift separating China and India from the rest of Eurasia, causing the former to collide with Australia from the west while the latter circles the globe eastward before docking with the new supercontinent.

But Rodinia’s dissolution 550 million years ago also fostered the conditions necessary for terrestrial life. The collision of continental plates raised the sea floor, creating the shallower basins that allowed aquatic life to make the evolutionary jump to dry land. Future iterations of the cycle might likewise kickstart an evolutionary boom.

Current tectonic activity appears relatively settled and will likely remain so for many millennia. Any changes lie at least 100 million years in the future — by which time we’ll all be past caring. (As Livermore quipped in 2007, “The beauty of all this is that no one will ever be able to prove me wrong.”) But it’s fascinating to ponder the shape of the world we leave to those who come after us — creatures as distant in time from humanity as we are from the dinosaurs.