The Mysterious Origin of the Real-Life Dire Wolf

Far from a creature of myth in Game of Thrones, the dire wolf was an iconic canid during America’s Ice Age — with an unexpectedly complicated genetic heritage. 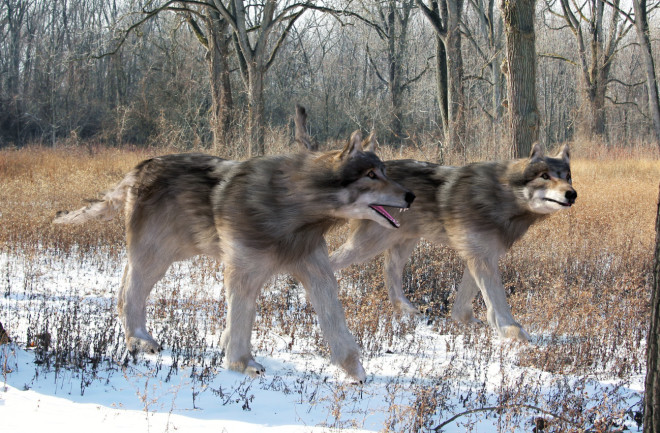 Anyone who’s watched or read Game of Thrones has likely heard of the near-mythical direwolf: a massive and terrifying beast. But the real-life origins of dire wolves aren’t found in George R.R. Martin’s imagination (or even a song by the Grateful Dead).

Angela Perri, an assistant professor of anthropology at Texas A&M University, says the study of dire wolves became pretty low-hanging fruit after the show aired. “They’re kind of the iconic creature of the Ice Age Americas,” she says. “It was fascinating to me that a lot of people didn't know dire wolves were a real animal.”

Admittedly, the creatures have been a bit tricky to study; while there are plenty of fossilized remains at the La Brea Tar Pits in California, there’s hardly any genetic material. Tar, as it turns out, doesn’t preserve DNA well. Scientists had assumed that dire wolves were close relatives — or even just a different morphotype — of today’s gray wolf, but nobody knew for sure without DNA evidence.

Though the prefix dire often means terrible, dire wolves weren’t quite the monstrosities that their name implies. On average, they would have been comparable in size to large gray wolves, though there were some differences: more robust frames and jaws, and slightly smaller feet, Perri says.

Evidence from the La Brea Tar Pits suggests the lineage was broken into two subspecies, one of which was slightly smaller. But its body size throughout the Pleistocene — a period spanning roughly 2.6 million to 11,700 years ago and defined by repeated glacial and interglacial periods — was largely stable.

Much of their diet probably would’ve consisted of horses and camels, which evolved in North America before radiating elsewhere and eventually going extinct in their native land. Perri adds that, because many dire wolf fossils are found with broken teeth, it’s believed that the animals relied on scavenging more than their distant gray wolf cousins.

Morphological evidence suggests they hunted, when necessary, in similar ways, though dire wolves may have had to hold on longer to their struggling prey. They also had a distinct preference for warmer, wetter climates (at least by Ice Age standards) and rarely ventured north of 42 degrees North latitude.

Not Wolves At All

Whether it was coincidence or not, in the years following Game of Thrones’ popularity, teams of researchers around the world began working on the dire wolf DNA problem independently. Perri, who had long studied human-canid interactions and canid evolution, found she wasn’t the only one interested in finding an answer.

Only after stumbling upon each other by accident did they all pool their efforts into one large study, published in Nature last year. What they found was largely unexpected.

As it turns out, dire wolves aren’t subspecies of gray wolves — or even close relatives, for that matter. In fact, Perri says, their closest living relatives are the African jackals. According to the genetic evidence she and her colleagues uncovered, the dire wolves and gray wolves parted evolutionary ways roughly 5.7 million years ago. “Now we know they are just an insane example of convergent evolution,” Perri says.

Read more: What the Animal Kingdom Meant to Ancient Societies

One of the most bizarre aspects of dire wolf evolution is their solitary presence in the Americas. Before the arrival of humans, wolves and dogs, Perri explains, their only competition was probably from the saber-toothed cats. Their struggle to adapt later on was probably a factor in their extinction, she suggests: “They were hanging out by themselves for a very long time, and specialized in the way they do things,” she says. “And then modern humans come in and they can do it all.”

The study Perri participated in opens up whole new avenues of investigation into the life and evolution of the dire wolf. For one thing, the relationship between other prehistoric canids and later canids is suddenly being called into question. Armbruster’s wolf and Edward’s wolf, for example, were long thought to be common ancestors of dire and gray wolves, and a coyote ancestor.

“But given what we found, that's probably not possible,” Perri says.

Though the new findings do help us to make sense of another, previous discovery: that there is no dire wolf DNA in any modern canids. This was a bit puzzling because canids love to interbreed, Perri says: “The fact that we have absolutely no genetic evidence that occurred most likely means that they were evolutionarily isolated.”

For a study that was (at least in part) kicked off thanks to a popular TV show, it has had remarkably profound implications. “We thought this would be a pretty simple look at this relative of the gray wolf, but now we've opened up this whole new door,” Perri says. “We have this whole new genus that may have covered the whole of the Americas, so that's pretty exciting.”