The Mysteries of the Dinosaur Tattoo 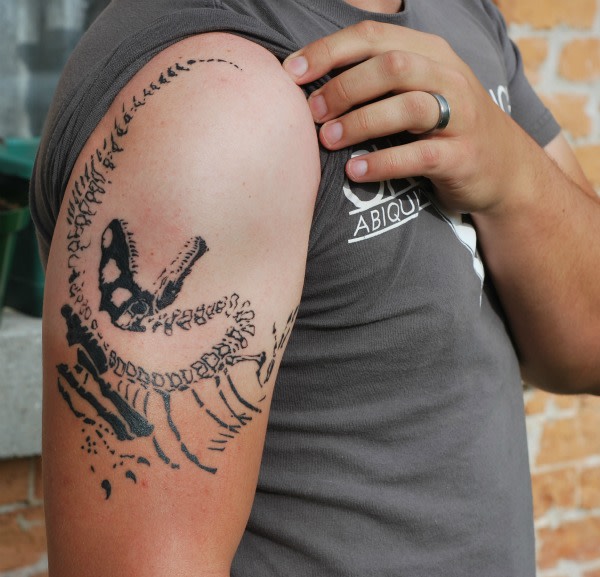 I have an Allosaurus on my arm. Heart of Gold Tattoo artist Jon McAffee put it there a few weeks ago. I think the tattoo—designed for me by friend and artist Glendon Mellow—came out beautifully. Contorted into the classic dinosaur death pose, the Jurassic apex predator is an expression of my passions and aspirations.

Paleontologists have uncovered scores of fascinating dinosaurs. I would have been proud to carry almost any dinosaur on my sleeve. But I knew my first science ink had to be Allosaurus. The dinosaur is not only the state fossil of Utah—I moved to the beehive state last year to get closer to dinosaurs—but the familiar predator is also an enigma.

Around 150 million years ago, when Allosaurus stalked across Jurassic Utah, the fern-covered landscape boasted an astounding diversity of huge dinosaurs. This was the time of giants such as Apatosaurus, Camarasaurus, Diplodocus, Brachiosaurus, Barosaurus and Stegosaurus, and these dinosaurs were prey for nightmarish carnivores such as Torvosaurus, Ceratosaurus and, of course, Allosaurus. There was scarcely a more fantastic time in the Age of Dinosaurs. But not all these dinosaurs were equally abundant. Among the big predators, Allosaurus is uncovered much more often than any of its knife-toothed competitors. At the Cleveland-Lloyd quarry outside Price, Utah, remains of more than 46 Allosaurus have been discovered so far, while only rare tidbits of other predators turned up. What was it about Allosaurus that made it the dominant carnivore of Jurassic Utah? I love mysteries like this. Allosaurus has been known to paleontologists for more than 130 years, but there are still some things about this creature that we just don’t know.

You can read more

from Brian at his blog, Dinosaur Tracking. Click here to order a copy of