The Most Massive T. rex Ever Found Was Also the Most Elderly 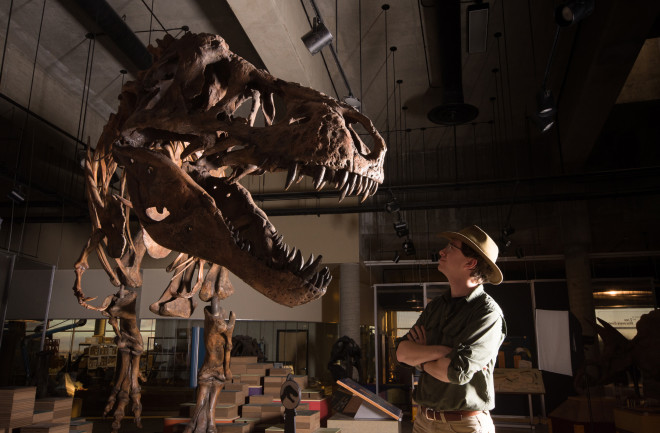 Scotty, the most massive T. rex ever found, is the also the most elderly. (Credit: Amanda Kelley)

“It’s a big honkin’ animal.” That’s how College of Charleston paleontologist Scott Persons describes the fossil that happens to share his name. “Scotty,” named for a celebratory bottle of scotch cracked open to toast its discovery, is the biggest Tyrannosaurus rex in the fossil record — and the most elderly.

The first bits of the animal surfaced back in 1991 in southwestern Saskatchewan, encased in iron-rich, extremely hard sandstone, which made excavation difficult and time-consuming. At the time, Persons notes, “no one knew how much of the animal was there, or how big it was.

It would take decades for researchers to excavate and prepare the bones for study. In fact, it wasn’t until March, when Persons and colleagues published the first full analysis of the animal in The Anatomical Record, that its enormity could be fully appreciated.

At an estimated 19,500 pounds, with a length of nearly 43 feet, Scotty is kind of a big deal. It’s larger than the most famous tyrant king fossil, Sue, who currently resides at Chicago’s Field Museum and is a couple feet shorter and about 800 pounds lighter.

“You couldn’t say this thing rivals Sue until you had all the numbers,” says Persons. But he is quick to note that size isn’t everything when it comes to the mightiest of apex predators. Scotty is an impressive 65 percent complete, but, at about 90 percent, “Sue is still the most complete. To be fair, in terms of scientific value, that counts for more.”

The most significant thing about Scotty may be its advanced age. Co-author Gregory Erickson studied growth patterns preserved in Scotty’s bones, similar to tree rings, to determine the animal was more than 30 years old when it died some 66 million years ago. Says Persons: “Most T. rexes die when they’re teenagers.”

(For comparison, paleontologists believe Sue lived to the ripe old age of 28.

“Scotty lived a hard-knock life,” Persons adds, naming a long list of animals, from club-tailed ankylosaurs to another hungry T. rex, that could have fought the apex predator. “Little kids tell me all the time they want to be a T. rex and I say, ‘No, no, no! T. rexes had an awful life!’ You’re trying to make a living and find your next meal and you’re getting beat up by everybody.”

Scotty had the scars to prove that. The animal’s remains include a broken rib, a nasty, lingering infection in its jaw and a massive compression injury on its tail that may have been the result of chomping by another T. rex.

While Persons is thrilled about presenting his namesake to the world, he believes Scotty won’t hold the heavyweight champion title for long.

“I can guarantee you that, in generations to come, it won’t be the biggest,” he says. “T. rex was around for millions of years, [and] we probably haven’t found the full extent of the range. There’s no way that we’ve happened to stumble across the largest member of the species.”

[This story originally appeared in print as "Most Massive T. Rex Ever Died Old And Battle-Worn."]