The Mechanics of Dolphin Sex: All The Dirty Details You Need To Know

How do dolphins do the dirty deed? 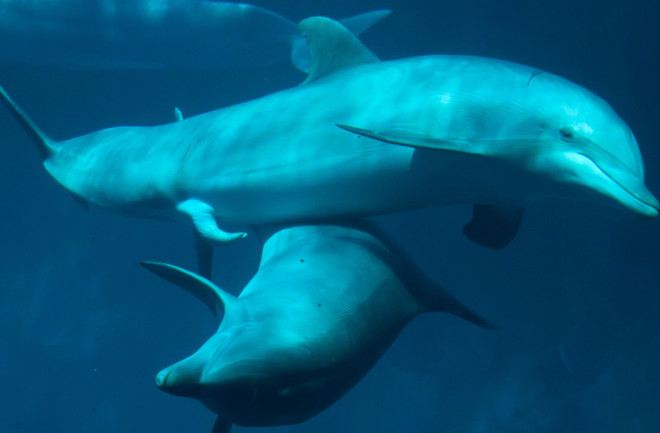 It takes a lot of pressure to recreate an erection like this. (Credit: Vladimir Wrangel)

Perhaps the hardest part about studying marine mammal reproductive anatomy using organs collected from deceased animals is that they can’t get an erection the easy way.

Reinflating human penises postmortem is a relatively trivial feat, says Diane Kelly, a research assistant professor at University of Massachusetts and penis inflation expert. Like most mammals, human penises are mostly fleshy, with lots of vascular space for blood to flow into to make the flaccid structure rigid with turgor pressure. But whale and dolphin penises are a lot tougher — quite literally.

“It’s actually a real challenge to artificially inflate cetacean penises,” she told me. Yes, the size makes things difficult — it takes a lot more saline to fill a large penis than a small one — but it’s more than that. “They have what’s called a ‘fibroelastic’ penis,” she explained, which means their penile tissue contains “a lot of collagen, and it makes the penis, even when flaccid, very stiff and less extensible.”

Finding a way around this hard problem is a large part of why Dara Orbach and Patricia Brennan brought Kelly on to the project. The goal: make the first 3-D CT scans of simulated intercourse of any marine mammal species using real, post-mortem genitalia — scans that were just published in a paper in Proceedings of the Royal Society B.

Orbach, a postdoctoral fellow at Dalhousie University and research associate at Mount Holyoke College, had the vaginas ready. She already knew that marine mammal vaginas are far more complex than anyone has given them credit for — lots of labyrinthine pockets, folds, and twists, which Orbach suspects may help females control paternity. “But as I started dissecting more and more reproductive tracts and looking at this amazing level of vaginal variability which had never been documented before, I realized this probably somehow coevolved with the penis,” said Orbach. That meant to understand the animals’ vaginas, she needed their corresponding penises to see how they fit together during intercourse.

Orbach turned to Brennan, a genital expert at Mount Holyoke College known for her work on ducks (and their terrifying penises), and together, with a caulking gun and silicone, they created models called ‘endocasts’ of vaginas from Orbach’s collection of 140 frozen marine mammal genitalia (all collected from animals that died of natural causes). Then they brought on Kelly for her penile inflation expertise.

“Most of what I have done are really small — armadillos, rats and mice, voles and other small things — where you just have to have a little syringe and a teeny bit of pressure and you get your erect morphology very quickly,” Kelly explained. The cetacean dongs were “another matter altogether.”

“We’re not talking hand-sized — we’re talking arm-sized, depending on the species,” Orbach added (“We did a killer whale, which was bigger than the table”). So inflating the marine mammal members required creativity. After some preliminary struggles (learning the hard way that plastic carboys are not pressure-rated, for example), Kelly’s final design was a used, $35 beer keg filled with saline and modified to allow her to pump in nitrogen gas to achieve an optimal injection pressure. “That did the trick,” she said.

Once pumped full of fluid, the penises were tied off and soaked in formalin to ensure they’d retain their engorged shape. Then, it was time to make the magic happen. “By looking at the shape of the vaginal endocasts and the penis shape, we were able to figure out which we thought would be to the best possible copulation,” Orbach explained. “Then we put the inflated penises inside the vagina, sewed them together, soaked them in iodine so they would be pretty well stained, and then did C.T. scans of them to look at how they fit together.”

The results — thanks to radiologist Mauricio Solano — are downright dazzling.

In total, they were able to simulate intercourse for four species of marine mammals: harbor porpoises (Phocoena phocoena), common bottlenose dolphins (Tursiops truncatus), short-beaked common dolphins (Delphinus delphis), and harbor seals (Phoca vitulina) — those were the only species they had high-quality male and female reproductive organs for (sadly, they did not have an intact orca vagina to pair with the larger-than-table-sized penis). They were also able to create digital 3D models of the penises and vaginas and simulate various rotations and positions to determine the deepest penetration possible.

The differences in reproductive anatomy between the species were impressive. Harbor porpoises, despite being the smallest species by body size, had the largest penises. “An erect harbor porpoise penis goes up to its chin — or, where its chin would be, if it were not a marine mammal,” Kelly said. And their vaginas are the most complex of the four, with “a whole bunch of spiraling folds,” Orbach explained, “which just keep twisting around … a little bit like a corkscrew.”

But the really fascinating part was that the scans revealed how vaginal complexity could limit penile penetration. “This confirmed there is this antagonistic coevolution,” said Orbach. That suggests that the folds allow the animals to control paternity, although further analyses will be needed to confirm that hypothesis.

When it comes down to it, we know very little about the mating of marine mammals, especially cetaceans. We’ve observed bottlenose dolphins getting it on in captivity and in the wild, but there’s no way to easily visualize what’s going on internally during copulation. We can’t simply flash freeze fornicating dolphins to examine where everything is during intercourse like scientists have done with small lizards.

Even courtship and mating behaviors are only superficially understood. In most marine mammal species, matings have never been observed because they occur underwater and in remote locations. For those species we have witnessed, like bottlenose dolphins, there are still many unanswered questions. In some places, male bottlenose dolphins form coalitions to isolate females and coerce mating — sometimes kidnapping the females for weeks at a time — but it’s not known if this is common behavior in all pods around the world, let alone if similar behaviors occur regularly in other species. If aggressive mating systems are commonplace, then it would make sense for such sexual conflicts to be reflected in the animals’ genital morphologies.

I don't want to know why they're grinning like that. (Credit: Hamid Elbaz)

And that seems to be what Orbach, Brennan, and Kelly have found, based on their copulation reconstruction data. “If the female doesn’t want to mate with a male, she may be able to subtly shift her body slightly to the left or the right so the penis is not at an optimum angle, which means that it will get caught in one of these vaginal folds earlier on, so then when the sperm is ejaculated it would have a longer distance to travel to fertilize the egg,” Orbach explained. “So by subtle body positioning, the female might be able to control which males are more or less likely to fertilize.”

The trio hopes to look at more species, including various ungulates — distant cousins of whales and dolphins. “I had the opportunity to dissect a hippo penis awhile back, and it was amazing how much it looked like a pygmy sperm whale,” Orbach recounted. “I’m really curious about how the different environments have affected penis morphology, and how much relates to a shared history, because in most animals we know that genitalia are one of the most rapidly evolving characteristics.”

They’re also considering using the endocasts to make biomimetic vaginas — essentially fleshlights for dolphins and other marine species — to hopefully improve artificial insemination procedures. Captive breeding facilities can help boost dwindling numbers for threatened or endangered species, and artificial insemination is sometimes needed to ensure animals reproduce safely and in a way that bolsters genetic diversity. “Something that would mimic a real vagina, in terms of having certain structures that would touch the penis or feel more natural, perhaps could induce a better quality ejaculate.”

One thing is for certain — the team is far from done working with large mammal reproductive organs. “This is the first step in what will hopefully be a pretty long research program,” Kelly said, smiling.