The Lure of the Landfill

Birds give up on migrating and gorge on garbage instead. 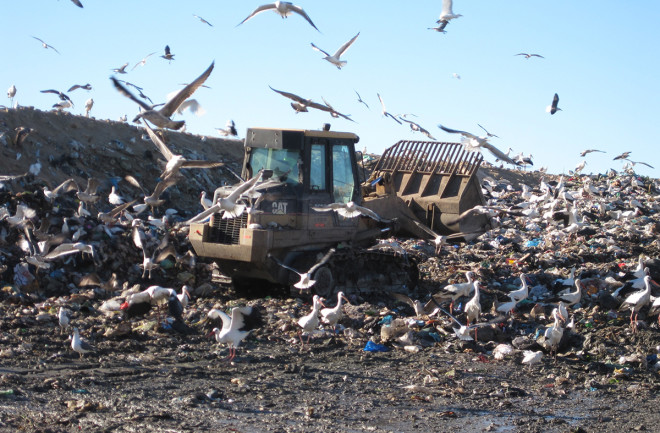 The easy access to food is just too enticing for white storks in Portugal. The birds have stopped migrating in favor of feasting at garbage sites like this one. | University of East Anglia

In 1822, a well-placed arrow solved the mystery of why some European birds would vanish after summer and reappear in spring. A hunter in Mecklenburg, Germany, killed a white stork that already had an African projectile lodged in its neck. Nearly two centuries later, European researchers are trying to explain a new phenomenon: Why have many storks stopped migrating?

Roughly 14,000 of the fair-weather fowl in Portugal have given up flying south. In a recent study published in the journal Movement Ecology, conservation ecologists used GPS tags to track 17 of those white storks through their normal migration period to figure out why.

Instead of heading to sub-Saharan Africa, the birds made regular trips from their permanent nests to landfills dozens of miles away — something previously unheard of.

Aldina Franco and a team from the University of East Anglia followed the birds as they feasted behind dump trucks dropping off discarded meat at a landfill. Incredibly, the steady supply has allowed stork populations to increase tenfold since the 1980s.

“The landfill food enables the storks to raise a larger number of chicks per nest,” Franco says.

The storks are just one of many species shifting their migration patterns because of human behavior. And these birds might soon reroute again: The European Union recently revised landfill rules so that food waste is handled under cover. That could leave the storks looking elsewhere for their junk-food fix.