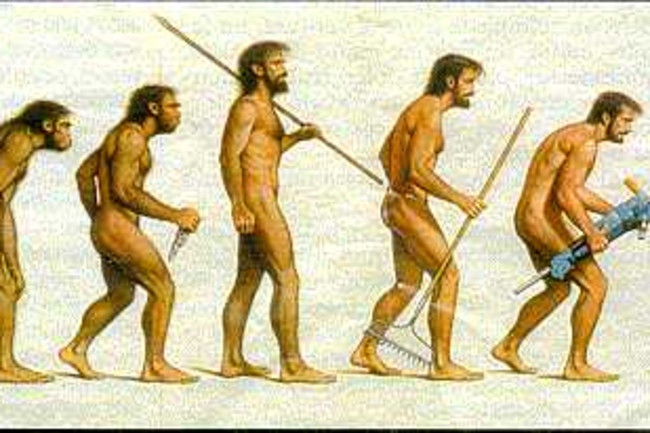 In 1970, the natural history illustrator Rudolph Zallinger painted a picture of human evolution called "The March of Progress" in which a parade of hominids walked along from left to right, evolving from knuckle-walking ape to tall, spear-carrying Cro-Magnon. The picture is etched in our collective consciousness, making it possible for cartoonists to draw pictures like the one here safe in the knowledge that we'll all get the joke. I had actually wanted to show Zallinger's own picture, but, like others before me, I failed to find it on the web. I was inspired to hunt down the picture by the news today of the discovery of a strange new fossil of a hominid--an extinct relative of humans--that lived 900,000 years ago.

Zallinger painted "The March of Progress" at a time when paleoanthropologists still had found only a few hominid species. When most experts looked the evidence, it seemed reasonable to line it up in a straight ancestor-descendant line, running from chimp-like apes to Neanderthals to us. But over the past 30 years, scientists have dug up many new sorts of hominids--perhaps as many as 20 species--and many of them don't seem to fit in Zallinger's parade. In some cases a number of different species seemed to have lived side by side--some that might have been our ancestors and others that veered off into their own strange gorilla-like existence. Neanderthals were not our ancestors, but rather our cousins, having branched apart from our own lineage over 500,000 years ago. And finally, a number of paleoanthropologists have taken a fresh look at some of the hominid species identified by their predecessors, and they've concluded that two or more separate species may have been unfairly lumped together under the same name.

As a result, many paleoanthropologists have turned against the march of progress. Certainly there's a single line of genealogy that links us to an ancestor we share with chimpanzees. (Just consult your own DNA if you doubt it.) But the forces of evolution did not steadily drive hominids towards our own condition. Evolution simulataneously wandered down many different avenues, most of which ended up as dead ends. Instead of a march, many experts began thinking of human evolution in terms of a bush. Some scientists have even claimed that the march of progress was a case of people imposing their cultural biases--the Western perception of human history as a steady improvement--on the fossil record. (See, for example, Stephen Jay Gould's display of Zallingeresque cartoons on pp. 30-35 Wonderful Life.)

But it's also possible to turn the question the other way. Scientists working in the 1970s were born just after the horrors of the Holocaust and came of age during the civil rights movements of the 1960s. Could they be eager to find examples of diversity in the hominid fossil record, to complement today's focus on ethnic diversity? Tim White of Berkeley has raised this possibility. He points out that some of the prime evidence for the bushiness of the hominid tree are extraordinarily busted-up skulls, which have been reduced to hundreds or thousands of chips. In the reconstruction of these skulls, it's possible for researchers to create a shape that seems so distinct that it must belong to a separate species. White also notes that with so few hominid fossils to study, it's possible to mistake variability within a single hominid species as evidence for two or more species. And, as I wrote in March, White has found evidence in the teeth of the earliest hominids between 5 and 6 million years old that they may be as similar as chimpanzees and bonobos.

Even the strongest advocates of the bushy tree generally held onto some pieces of the old march of progress. Before 1.8 million years ago, the evidence suggested, hominids were tiny, small-brained African apes that walked on two legs and could use simple stone tools. But shortly thereafter hominids got tall--in some cases over six feet tall. Their brains became larger as well. Their fossils (starting with the species Homo ergaster) began to turn up in harsh, dry African grasslands, suggesting that their new long legs helped them stride efficiently across vast distances, and their bigger brains allowed them to find new sources of food. And within a couple hundred thousand years, descendants of these tall hominids (known as Homo erectus) had bolted out of Africa and spread from the Caucasus Mountains to Indonesia. Some diversity would remain--Neanderthals, for example, appear to have evolved in Europe and didn't interbreed much if at all with our own species before they became extinct. But all of these species were now big-brained and long-legged.

This model began to strain a bit two years ago when scientists reported that one of the earliest fossils of a hominid out of Africa, in the former Soviet country of Georgia, was small. Although it was a full-grown adult, its brain was about 600 cubic centimers (ours is 1400 cc, plus or minus about 200 cc), and fit into a miniature skull. One stray footbone found along with the skull suggests that it stood less than five feet high. The discovery led some scientists suggested that the first exodus of African hominids began before the tall Homo erectus evolved. But this proposal is undercut by the many features that linked the Georgian skull to Homo erectus.

One fossil can't support all that much speculation. So that was why it was so fascinating to read today about the discovery of another tiny Homo erectus skull. This one comes from Africa, not Asia. Its skull was about the same size as the Georgian fossil. But it lived 800,000 years later. What are we to make of these tiny people? A couple hypotheses might explain these remarkable fossils, one from the March-of-Progress school, and one from the Bush school.

A Bushist could reasonably suggest that the evidence shows that a lot of the fossils that are called Homo erectus belong to separate species. Small hominid species were able to migrate out of Africa and, within Africa they thrived alongside taller species for hundreds of thousands of years. If this is true, it casts doubt on the important of long legs for the spread of hominids. It also raises questions about how big of a brain you need to make sophisticated tools. The newly discovered Kenyan individuals were found in the same rocks where scientists have found lots of well-crafted hand axes and butchered animal carcasses. Yet their brains were significantly smaller than other individuals that appear to be Homo erectus.

A Marcher could offer a different hypothesis: under certain conditions isolated groups of Homo erectus evolved from tall to short. After all, the same reduction has happened in our own species, among pygmies in Africa and several other populations around the world (and has evolved only over a matter of hundreds or thousands of years). But just because they became very small doesn't mean they became a separate species of their own.

The truth may be that scientists need dozens or hundreds of times more hominid fossils to make a confident choice between these alternatives. But today's news raises a very interesting possibility. In Africa, the fossil record of Homo erectus peters out about 800,000 years ago, replaced by species that seem more closely related to our own. But in Asia, heavy-browed weak-chinned Homo erectus seems to have lingered a long time--perhaps as recently as 40,000 to 80,000 years ago on Indonesia. That's just around the time when our own species left Africa and arrived in southeast Asia. My hunch is that miniature hominids may have survived in isolated refuges for a long time. Are they still lurking on some deserted island or jungle enclave? I doubt it. But it wouldn't surprise me if Homo sapiens did come face to face with them before they disappeared.