The Little Lemming That Could (Bite Your Face Off) 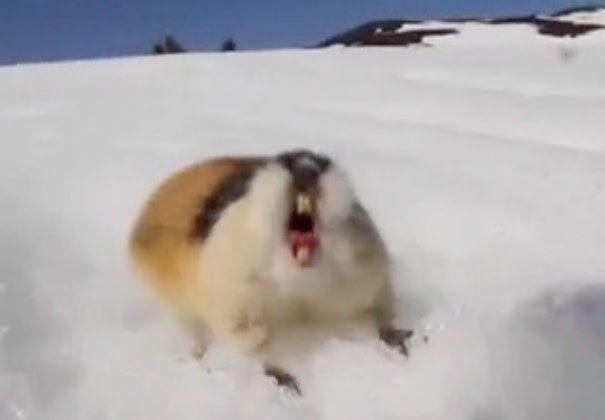 In a world of shy, quiet-as-a-mouse rodents, one lemming is the exact opposite. It attacks when it should retreat to a hole. It squeals and shrieks when it should keep silent. One scientist is working to figure out how evolution created this animal—and wearing thick gloves while he does it. First, forget what you think you know about lemmings. You've likely heard a rumor that these rodents hurl themselves off of cliffs in droves. It's not true, though the makers of a 1958 Disney documentary promoted the myth by chasing a bunch of the poor animals into the ocean. Lemming populations do go through wild booms and busts, and lemmings may migrate to new areas when a local population gets out of hand. But otherwise the Arctic dwellers spend their time doing normal rodent things like burrowing, eating grasses, and not committing mass suicide. Except that the Norwegian lemming, Lemmus lemmus, isn't quite normal. Its fur, instead of being a dull brownish gray, is boldly patterned. It's reddish on its back, yellow on the sides, and white and black around its face. You won't miss it—but if you do, its loud screams will soon get your attention. It also has a reputation for violence. Norwegian lemmings have been reported fighting off stoats and crows and lethally injuring at least one weasel.

Malte Andersson, of the University of Gothenburg in Sweden, has sustained some injuries himself. "I soon learned to use gloves in catching lemmings," he says. Nevertheless, he wanted to find the reason behind the Norwegian lemming's unusual boldness. How did such an animal ever evolve? The coat of Lemmus lemmus seems conspicuous, but other researches have suggested it actually blends in with the vegetation where the animal lives. To test this, Andersson organized a game of "Where's Waldo?" with 30 dead lemmings and 18 (live) biology students. He placed the lemming corpses "in as natural a position as possible" near an outdoor path. He also planted the bodies of 40 gray-sided voles, a blandly colored neighbor of the Norwegian lemming. Andersson asked students to count the rodents they spotted while walking the path. All 18 observers found a higher proportion of the lemmings than the voles—suggesting that yellow-and-black rodents are, in fact, more conspicuous. To predatory birds, which have better eyesight than humans, Andersson thinks the lemmings must be even more obvious. Andersson also spent time observing the behavior of Norwegian lemmings in northern Sweden. As he walked through their territory, he recorded how the animals reacted to him. He did the same thing in Alaska with brown lemmings, a more subdued rodent species. Out of 39 brown lemmings that crossed the scientist's path in Alaska, almost all were silent. Just one called out as Andersson chased it down for capture and weighing. Yet among 110 Norwegian lemmings, nearly a third screamed at Andersson as he approached. They were most likely to call when he was in close range—though they ran for cover at the same time, since Andersson is substantially bigger than their usual predators. Young Norwegian lemmings called just as often as adults did, displaying probably more bark than bite. Andersson thinks Lemmus lemmus uses attention-grabbing colors and behavior to scare off predators, rather than trying to stay hidden like most other rodents do. This strategy, called "aposematism," is common in animals like insects, snakes, and frogs. Vivid coloration says, "I taste awful and if you take a bite you'll regret it." Mammals such as skunks and stink badgers have bold, black-and-white stripes that warn of the smelly liquid they'll spray if you get too close. Yet if the Norwegian lemming's strategy really is a kind of aposematism, Andersson says, it would be a first. Unlike a poison frog or a spraying polecat, this rodent has no chemical weapons to defend itself. It has only its nasty, aggressive behavior. But Andersson thinks the animal's loud squeals and bright fur are a deliberate warning to predators: mess with me, and you'll be sorry. Although scientists haven't proven that any other mammals share this strategy, Andersson says, there are some candidates. For example, the European hamster has boldly patterned fur and can be vicious. If any Disney producers tried to chase them off a cliff, you can bet these rodents would stand up for themselves.