The Limits of Science—and Scientists

Ananyo Bhattacharya is the chief online editor of Nature magazine. 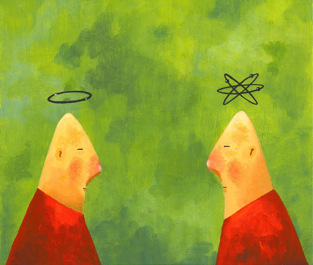 "About what one can not speak, one must remain silent." The last line of Ludwig Wittgenstein's Tractatus tends to resonate with scientists, sceptics, atheists, and other fans of rationality. If your thought cannot be articulated sensibly in plain language then you had better keep it to yourself. Written amid the slaughter of World War I, the book became central to the Vienna Circle, a group of philosophers who sat around the Café Centrale in the 1920s discussing which statements could be boiled down into verifiable empirical claims and those that could not. The latter, which included all of metaphysics and theology, they dismissed as meaningless nonsense. When the group finally convinced a reluctant Wittgenstein to visit them, he was so exasperated with their philosophy, logical positivism, that he took to turning his chair to the wall and reading Rabindranath Tagore poetry out loud during their meetings. They had misunderstood him, Wittgenstein explained. The ethical convictions, values and metaphysical ideas they had busily classified as "nonsense" were not worthless. In fact, they were the most important concerns in life. I was reminded of Wittgenstein recently, when I read the firestorm of online criticism that followed the publication of a column in Nature magazine by Daniel Sarewitz, co-director of the Consortium for Science, Policy and Outcomes at Arizona State University. In the piece, inspired by a visit to the Angkor temples in Cambodia and gamely entitled "Sometimes science must give way to religion," Sarewitz drew some parallels between science and religion. (Note, however, that he did not support the misguided idea that science and religion were the same, or that science was nothing more than a belief system.) Worse, in many people's eyes, was that he went further and argued that science alone is not enough—humanity will always need other ways of understanding the world. Citing the recent discovery of the Higgs boson, Sarewitz says:

"For those who cannot follow the mathematics, belief in the Higgs is an act of faith, not of rationality...in practical terms, the Higgs is an incomprehensible abstraction, a partial solution to an extraordinarily rarified and perhaps always-incomplete intellectual puzzle. By contrast, the Angkor temples demonstrate how religion can offer an authentic personal encounter with the unknown."

I have my own problems with the piece. But the vehemence of the attack on Sarewitz would have made anyone think he had advocated teaching creationism in science classes while smacking Richard Dawkins around the head with a copy of the Holy Bible. Many focused on the difference between the trust that religion and science demand of us. Sarewitz had argued that, for the layperson (an interesting term

when you consider it in this context), accepting today’s scientific findings is, to some extent, an act of faith: It requires them to believe what they are told by the scientific community, as they have no way to directly verify such results themselves. The critics disagreed. Unlike religion, science does not require blind faith, they said—only trust in scientists, who had, after all, produced verifiable results and made successful predictions in the past. But that is to conflate well-established science—a body of knowledge supported by so much experiment and observation that it is very likely true—and the new findings of science at any particular moment, which are quite likely to be false

. Scientists are of course human, many as fallible as any whisky priest. So you could argue that the much vaunted "trust" in science—proclaimed by Sarewitz's critics as being purely rational—looks a bit more shaky than it did at first sight. Sarewitz was right that accepting new research requires not blind faith but "belief," and most dictionary definitions of the word are perfectly consistent with his argument. But what was truly staggering was the support for the notion that science was, as one critic put it

, "the best and only method we have for understanding reality". It was here, in their rush to defend the walls of reason from the barbarians at the gate, the scientistas unwittingly took their cue from the logical positivists and came rather embarassingly unstuck. It is as if, given an excellent Philips screwdriver

, someone had concluded that only cross-head screws are of any use. Or worse, that they are the only type of screw to exist. Imagine if, the next time you go to see The Long Day's Journey Into Night

or The Dark Knight Rises

, the activity of your brain is recorded by an MRI machine. Would a full scientific explanation of those recordings really constitute the "best or only" way to understand the experience? For anyone? Yet in their eagerness to bash those that dare to suggest that one might experience wonder and awe, or be moved, outside a scientific context, the scientistas happily dismiss culture without a second thought. When the philosopher A. J. Ayer was asked in the 1970s to identify the key weakness of logical positivism, Ayer, once one of its leading propononents, replied that "nearly all of it was false." By recycling the discredited notions of a dead philosophy, those that rashly criticised Sarewitz have demonstrated that they would benefit from a good, hard reading of poetry.