Scientists set up camp—and lots of specialized gear—near Cape Canaveral, in Lightning Alley, to try to decode the elusive physics of the flashes. 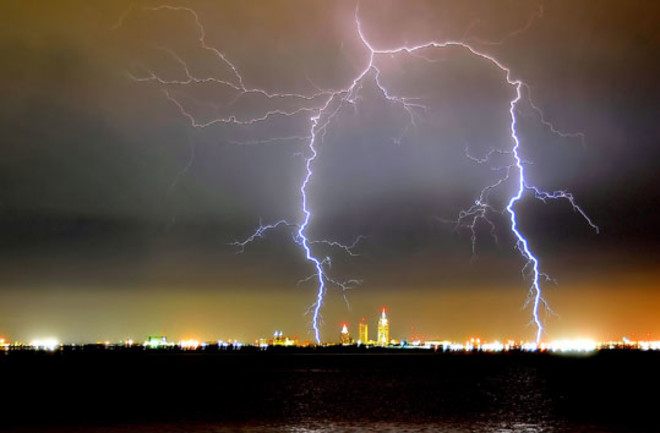 Titusville, Florida—the ideal spot for launching spacecraft in the United States just happens to lie right in the middle of a region known as Lightning Alley. Even when the air over Florida’s Cape Canaveral—home to the Kennedy Space Center (KSC)—is free of storms, electrical conditions can cancel a liftoff. Flight controllers dare not send a rocket into a charged blue sky, where the craft might act as a giant, flying lightning rod. And before liftoff, an ill-timed bolt could easily scuttle a mission. “If lightning strikes near a vehicle being readied on the launchpad, we might have to retest every system to see if induced currents have caused damage,” says Frank Merceret, research director of the space center’s weather office. “We might even have to roll the space shuttle back into the Vehicle Assembly Building.”

For all these reasons, Merceret eagerly welcomes the visit of two veteran researchers from the University of Mississippi, Tom Marshall and Maribeth Stolzenburg, whose ongoing project here seeks to explore fundamental lightning physics. Marshall says, “There’s no lab analog for lightning.” This is why his team has packed two van-loads of equipment for deployment here at the peak of summer’s thunderstorm activity. Lightning is all too well-known for the way it conducts a potent rush of charge from agitated storm clouds down to ground level, but despite decades of research, the most important details of the dynamic still defy description. No one knows exactly how strokes begin—or “initiate” in lightning parlance—nor is it understood how they propagate within a cloud or from one cloud to another, or trace their jagged, stepped paths through the air from cloud to ground.

Marshall and Stolzenburg hope to capture the entire life cycle of a lightning flash by linking their custom-designed detectors to four other types of sensors, three of which are already permanent fixtures of KSC’s lightning-warning system. Each type of sensor detects a different electromagnetic frequency, tuning in to a specific phase of the lightning stroke. Combining the inputs from all the sensors on microsecond timescales—something that has never been done before—will allow the researchers to capture a stroke as it ignites, accelerates, and moves charge.

They hope the data will eventually help shape a general theory of lightning behavior. As a more immediate, practical goal, Marshall and Stolzenburg want to test whether KSC’s surveillance system reliably registers all the strokes thrown down during any given storm. Evidence from earlier studies suggests that some strokes slip by unnoticed during moments when sensors are overloaded.

Although the object of the scientists’ study embodies beauty and terror in equal portions, the labor of their measurement entails many mundane duties: lugging car batteries to and from equipment installations, recharging them overnight, and repeating the process daily over a period of weeks. Today’s site inspection takes us first to Merritt Island National Wildlife Refuge, on the fringes of the space center. En route we encounter several large swaths of vegetation smoldering in prescribed burns—fires set by the U.S. Fish and Wildlife Service to clear undergrowth or control insect pests. The lightning researchers view the patches of scorched ground through the hopeful lens of their interest: Perhaps the cloud of smoke from the burn will trigger lightning strikes. But this does not happen.

The Merritt Island lightning detection apparatus is housed in a large yellow metal locker with two antennas sticking up like high-hat cymbals on a drum set, and a sign warning “Danger High Voltage.” One antenna is “fast,” the other “slow.” Both measure the amount of charge in a single event. Fast and slow are relative terms here, since everything about lightning happens quickly: The fast antenna (operating at 500 kHz) examines the field on a microsecond scale, while the lower-frequency slow antenna (running at 10 kHz) detects surges on a millisecond scale.

University of Mississippi graduate student Sumadhe Karanarathne, who built much of the equipment and wrote some of the computer code for it, unlocks the yellow box and downloads yesterday’s data onto a portable hard drive (which he will take to the motel and back up four times, just to be sure he doesn’t lose any of it to some unexpected glitch). His wife, Nadee, an engineer, rubs the surfaces of the attached antennas with alcohol wipes to remove conducting materials such as salt, dust, and spiderwebs. Undergraduate Lauren Vickers, who changed her major to physics after getting a taste of lightning research two years ago, swaps out a run-down pair of batteries for freshly charged replacements.