A small frog in a dark rainforest gives one scientist hope for endangered amphibians. 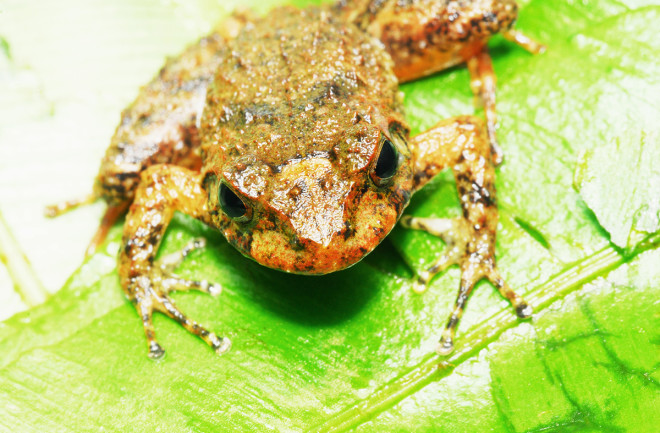 Jonathan Kolby knows extinction is final. The James Cook University herpetologist studies global frog populations and their decline from the widespread and deadly chytrid fungus. Now Kolby hopes to give endangered frog populations a leg up by allowing them to develop natural resistance against chytrid in temporary captivity. An unusual brown frog in Honduras’ Cusuco National Park inspired his approach. He first spotted it while surveying amphibians with students back in 2007.

It was about 10:30 or 11 at night. Everyone was getting a little tired. We were about to head back, and I saw a frog. It was this little brown frog, pretty nondescript. I jumped into the mud and totally missed it. For the next half-hour, I proceeded to crawl around in the river. Eventually I gave up. It was gone.

In 2008, I had one chance to get back to this same location. I couldn’t believe my eyes when I got there. On that very same rock was a little brown frog. I thought I was hallucinating. I dove down and caught it.

It was Craugastor milesi, the Miles’ Robber Frog. At that time, only two species of frogs had been declared extinct in Honduras, and this was one of them. It was an amazing moment. I study amphibian chytrid fungus, and this was one of the species we believe has disappeared likely because of this disease back in the ’80s as it swept through Central America.

Five years later in 2013, I found a second one. This was on the other side of the park. Something caught the corner of my eye. I knew there was a frog watching me. I started staring at this big muddy puddle, waiting for another movement. Then I saw the little nose come above and look at me. It was another Miles’ Robber Frog, miles away from the last one.

Neither one tested positive for chytrid, although I know it’s highly prevalent throughout this park. There may have been a very dramatic population crash when this disease swept through, but some animals were hanging on. There’s still hope.

It’s exciting for me because I’m establishing the Honduras Amphibian Rescue and Conservation Center. If we keep these species alive in the wild over many, many years, by captive breeding and reintroduction and head-starting, we could have these strong survivors begin to come back and repopulate the environment.