The Last Rhinos Around The World

A global poaching epidemic has conservationists wondering how long the animals will survive. 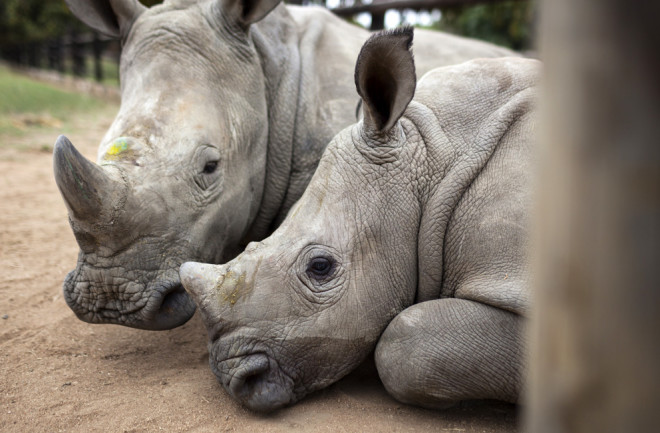 Each found beside the body of their poached, dehorned mothers, orphaned rhinos Gertjie and Matimba were taken in at South Africa’s Hoedspruit Endangered Species Centre (HESC). Humans cared for the two around the clock to reduce their physical and emotional trauma. Sheep are sometimes used as surrogate mothers for orphaned rhinos; Gertjie and Matimba eventually formed a herd of three with Lammie the ewe. | Russ Juskalian

Amid a decade-long global rhino poaching epidemic, many conservationists wonder how long the animal will survive in the wild. Rhinos are killed for their horns, which are sold illegally in Vietnam and China — at street prices higher than gold — for their purported medicinal qualities. For example, just in South Africa, rhino poaching incidents skyrocketed over 9,000 percent, from 13 in 2007 to 1,215 in 2014. The country responded with dramatically increased funding and the militarization of anti-poaching teams, resulting in a small drop in 2016, to 1,054 poachings.

Now, conservationists are scrambling to save the last five rhino species left on Earth, limited to ever-shrinking territories in Africa and Asia. Some governments are even experimenting with the controversial idea of allowing farmers to raise rhinos to harvest their horns (which can be painlessly trimmed and regrown like fingernails). Russ Juskalian traveled to South Africa, Vietnam and Indonesia to document the animals’ last stand.

A helicopter carrying a team of environmental crime scene investigators casts a shadow beside the decomposing body of a poached rhino in South Africa’s Kruger National Park. Poaching sometimes occurs within view of roads that, in daytime, fill with tourists observing the park’s wildlife. | Russ Juskalian

[This article originally appeared in print as "Last Chance To Be."]