The Island of Fossil Viruses 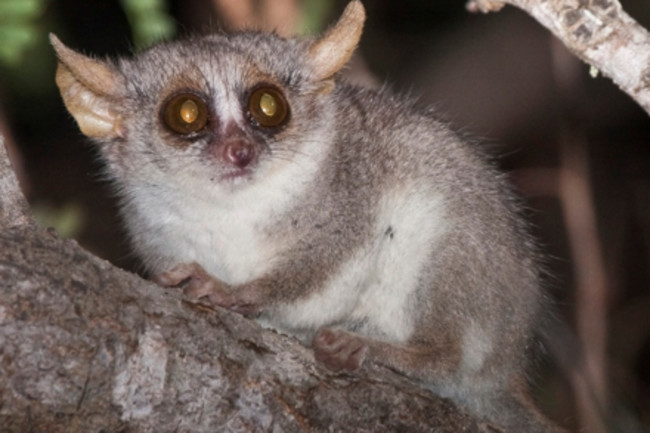 Madagascar has long been famous for its peculiar biodiversity, from its lemurs to its baobob trees. In the mid-1700s, the French naturalist Philibert Commerson wrote,

May I announce to you that Madagascar is the naturalist’s promised land? Nature seems to have retreated there into a private sanctuary, where she could work on different models from any she has used elsewhere. There you meet bizarre and marvelous forms at every step...

None of the island's land mammal species are found anywhere else on Earth; 95% of the reptile species and 99% of the amphibians are unique as well. Over 15% of all the primate species on Earth live on Madagascar, which makes up only .4% of the Earth's land surface. It separated from Africa about 120 million years ago, and is now separated by a channel some 250 miles across. Madagascar remained attached to the Indian subcontinent for millions of years more, but eventually they pulled apart as well, with India heading north towards Asia and Madagascar staying put in deep isolation. The species that were on board Madagascar at the separation continued to evolve there. New species arrived later, but only rarely. It's possible that they drifted from Africa on giant rafts of vegetation swept to sea by storms, or lived on islands that existed for a time between Madagascar and the continent. In any case, Madagascar became both a laboratory and a museum. Many new species evolved, adapting to open ecological niches. And while old lineages became extinct elsewhere, they survived on Madagascar. The only primates on Madagascar are the lemurs. They represent the oldest lineage of primates alive today on Earth, having branched off from other primates about 70 million years ago. I guess it was just a matter of time before someone discovered that Madagascar is a museum for viruses as well.

The discovery, reported this week, came when a team of American and English scientists perused the genome of the gray mouse lemur. Nestled among its genes were segments of DNA that bore a remarkable resemblance to HIV. How on Earth could a deadly virus's genes become part of a primate's own genome? Some kinds of viruses, known as retroviruses, replicate by inserting their DNA into host cells, where their DNA can guide the production of new viruses. But many studies indicate that sometimes these viruses infect the cells that will give rise to sperm and eggs. The virus ends up in a fertilized egg and gets passed down to ever cell in the developing embryo--including its own sex cells. Now the virus gets passed down through the generations. It may still retain the ability to infect other cells for a while, but mutations typically knock out that ability. Instead, the virus can only insert copies of its DNA back into its own host cell's genome. Over millions of years, this viral DNA spreads through the host genome. Our own DNA contains 98,000 stretches of this virus DNA, plus 150,000 tiny viral fragments, making up about 8% of our genome--about five times more DNA than the DNA that encodes proteins. It wasn't a huge surprise to find one of these so-called endogenous retroviruses in the gray mouse lemur's DNA. What was surprising was that it belonged to the same group of viruses that includes HIV--known as lentiviruses. There is only one other record of a lentivirus going endogenous--discovered just last year in rabbits. The scientists who discovered this rare endogenous lentivirus realized they had a rare opportunity on their hands: a chance to infer some of the earliest stages in the evolution of one of the world's worst scourges today: HIV. To uncover the history of HIV, scientists build evolutionary trees. They compare strains of the virus that infect humans, and search for related versions in other animals. There's a lot of evidence now that HIV is the result of several viruses that hopped from other primates to humans. There are two main divisions of HIV, HIV-1 and HIV-2. HIV-2 evolved from a virus in monkeys known as sooty mangabeys (SIVsmm for short--the SIV stands for simian immunodeficiency virus, as opposed to human immunodeficiency virus). HIV-1 turns out to be a few different strains, which evolved from chimpanzee viruses known collectively as SIVcpz. The different mutations that have accumulated in HIV strains since these jumps indicates that they took place within the last century. But there's a lot of evidence scientists can use to trace back the ancestry of HIV further than its jumps into our species. They've found SIV infecting not just chimpanzees and mangabeys, but gorillas and other African monkeys. (Interestingly, primates don't get sick from their strains of SIV, having evolved defenses against them.) Scientists have also found related lentivurses in cows, horses, sheep, rabbits, and cats. Feline immunodeficiency viruses, in fact, turn out to be the most similar to SIV. These lentiviruses evolved from common ancestors that lived millions of years ago, but the details of that early evolution are hard to tease out of their DNA. Lentiviruses mutate very quickly as they move from host to host, and this rapid mutation eventually erases some of the history chronicled in their DNA. It becomes hard to tell how individual genes in the viruses evolved, for example, and how much viruses moved between species, as opposed to just infecting one host. The discovery of a relative of SIV in the gray mouse lemur genome was thus exciting for two reasons. One was the fact that it was a lemur carrying the virus DNA. Until now, no one had ever found a SIV-like virus in lemurs. Since lemurs branched off early from other primates, it was possible that SIV first entered primates after that split. This new virus makes the possibility unlikely. The other reason the discovery was exciting was that this virus was endogenous. Once it became part of the lemur's genome, it was protected from mutations by the lemur's sophisticated DNA-repair enzymes. Today its DNA is not the same as when it first entered the lemur genome. But it has changed less than free viruses. As the scientists scoured the gray mouse lemur more, they discovered ten segments of DNA belonging to the same virus, which they've named pSIVgml (prosimian immunodeficiency virus). Because they were only looking at a rough draft of the gray mouse lemur genome, they predict that this figure may triple when the final read of the genome is finished. To make sure this wasn't just a virus that had infected a lone lemur, they fished for the virus DNA in another gray mouse lemur and found it. They then compared all these pieces of pSIVgml DNA to reconstruct what their common ancestor's genes looked like, and then compared that ancestral virus to viruses in other species. Here's the tree they got: 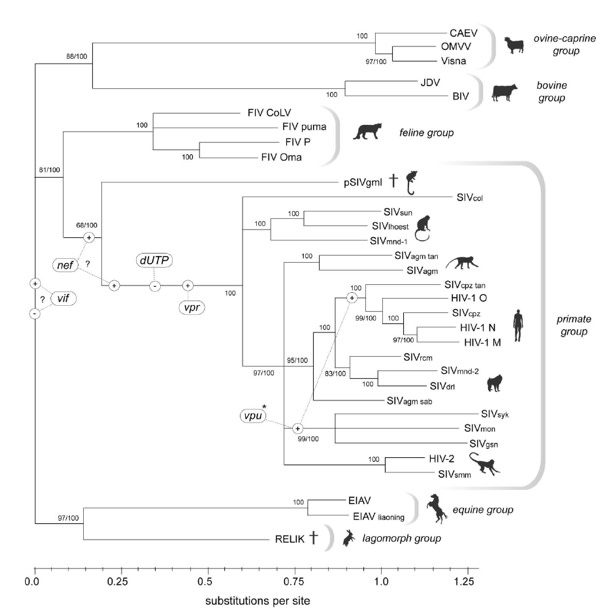 The different versions of the lemur virus appear to share a common ancestor between 1.9 and 3.8 million years old. Before then, pSIVgml's ancestors must have been free-living, presumably infecting gray mouse lemurs in Madagascar. Exactly when the virus merged with its host isn't clear, but it has clearly been trapped in lemur genomes for at least a couple million years. Compared to other lentiviruses, pSIVgml has the same relationship as their lemur hosts do to other hosts. The ancestors of the virus branched off on their own before the evolution of SIV viruses that now infect other primates. This tree indicates that pSIVgml is, in the words of the scientists, a transitional virus. Until now, all the SIV strains scientists had identified were distinct from other lentiviruses in some key ways. They all had two unique genes, for example, called nef and vpr. But they also lacked a gene found in other lentiviruses, called [strike]vpr [/strike]dUTP. The gray mouse lemur's virus has nef--which unites it with other SIVs in primates. But it doesn't have vpr. And it still has dUTP, which other SIVs have lost. It's the virus world's answer to fish with fingers or whales with legs. The full-blown SIV genome did not evolve all at once, in other words, but in a series of steps, one of which we can now see with the discovery of this extinct virus. 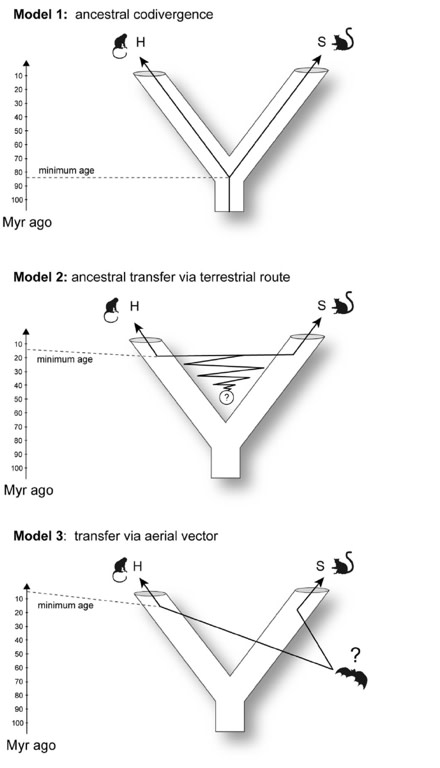 As with any startling new discovery in evolution, pSIVgml raises some hypotheses that scientists can now test. The virus might have been handed down to mouse gray lemurs today from the viruses that infected the common ancestor of lemurs, monkeys, apes, and humans 85 million years ago. (Model 1 in the picture I've reproduced here.) That fits the pSIVgml tree. But there's a hitch: the monkeys of the New World don't seem to have SIV. So if Model 1 were right, they'd all have to have lost the virus. Possible, but a stretch. Or perhaps one of the rare mammals that came to Madagascar from Africa carried a lentivirus that later hopped the species barrier and infected lemurs. The last time this happened is 14 million years ago (this is model 2). The third possibility is that bats passed lentiviruses to both lemurs in Madagascar and the ancestors of apes and monkeys in Africa (model 3). But no one has found a bat lentivirus. On the other hand, lentiviruses can be hard to isolate, so perhaps in years to come someone will find a bat lentivirus. Or maybe a howler monkey will turn up with its own strain in Costa Rica, adding support to model 1. Certainly, it would be a good idea to take a closer look at the other 32 species of lemurs on Madagascar, to see if they have freely circulating SIV, or an endogenous virus trapped in their DNA. The museum of Madagascar probably has more secrets for us to find. Images: Lemur: copyright Markren--reprinted from Flckr with permission. Tree: PNAS