Long before the Silk Road or the Roman Empire, the Indian Ocean was awash with commerce. 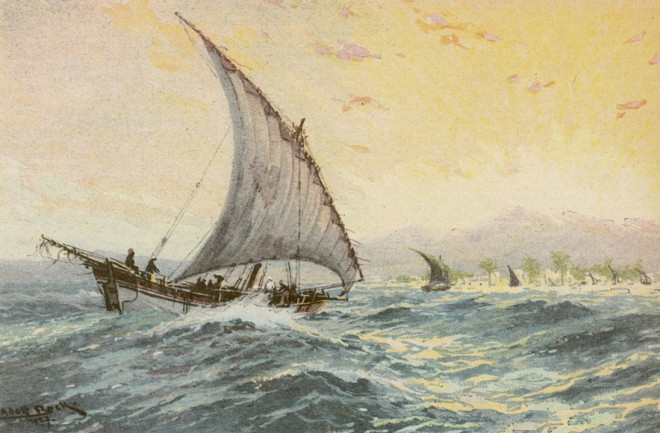 It’s a chapter of history nearly forgotten: Intrepid merchants and explorers traveled thousands of miles, not along storied caravan routes, but across the great blue expanse of the Indian Ocean, exchanging goods and ideas, forming bonds and challenging our notions about the ancient world.

“People think that it must have taken a long time to get anywhere, that it must have been difficult to travel long distances, but that is not true,” says archaeologist Marilee Wood, whose research focuses on the network’s glass bead trade. “This [field of study] is about opening that all up.”

In fact, by the time Marco Polo set out to explore East Asia in the 13th century, communities across Africa, Asia and the Mediterranean had been exchanging their wares for thousands of years in a vast network driven by the monsoon winds of the Indian Ocean.

As trade flourished along the network’s routes, so did construction, such as this massive fifth-century basilica in Adulis, a port city in what’s now Eritrea on the Red Sea coast. (Credit: David Stanley)

Early scholars presumed that the Indian Ocean network had developed to supply the Roman Empire’s demand for exotic goods. However, new evidence shows that the network predates the Romans by generations.

The Indian Ocean system developed out of the gradual integration of earlier regional networks. By 3000 B.C., travelers in small canoes and rafts moved between towns and trading ports along coastlines from Arabia to the Indian subcontinent. By 2000 B.C., millet and sorghum — grains imported from the East African coast — were part of the cuisine of the Harappan civilization, which stretched across today’s Pakistan and northern India. Archaeological evidence and genetic studies suggest that the first major settlement of Madagascar came not from Africa — a short hop across the Mozambique Channel — but from Indonesia, 4,000 miles away.

Less famous than the Silk Road — its land-based parallel — the maritime web of commerce and cultural exchange operated on seasonal monsoon winds. The network grew out of ancient regional routes and, by 2,000 years ago, connected Western Europe with East Asia. (Credit: Rick Johnson/Discover)

During its peak, the trade network connected places as far-flung as China, Rome and southern African kingdoms such as Great Zimbabwe. In terms of the sheer amount of goods moved, the maritime trading system rivaled its more famous inland relative, the Silk Road.

A first-century Greek manuscript, The Periplus of the Erythraean Sea, recorded trading depots and ports’ locations, goods and populations with enough accuracy that researchers today are able to match archaeological sites with the text’s descriptions. For example, using the text, one team has determined a site in present-day Eritrea was Adulis, an important city in the early Christian empire of Aksum. For more than a millennium, farmers, shepherds and merchants went there from surrounding villages to exchange raw materials such as ivory, salt and animal skins for Persian glassware, Arabian spices and other exotic products.

Many of these goods made their way far inland. Archaeologists today regularly recover small items like glass beads, spindle whorls or Chinese porcelain at sites across Africa and the Mediterranean. These foreign-made objects — particularly those easily transported, such as glass beads — became a kind of currency in more ways than one.

“It wasn’t like money, though you could say beads the length of your arm would get you a cow, or a certain number of chickens,” Wood says. “But it created a form of wealth and power. It built alliances.”

This exquisite gold rhino is one of many grave goods from burials at the site of Mapungubwe in southern Africa. In the 12th and 13th centuries, the city was a nexus for local, inland commerce and Indian Ocean gold trade. (Credit: Stefan Heunis/AFP/Getty Images)

Not only owning, but also giving away such exotic items appears to have been critical in gaining political power and building trust.

Archaeologists still have many questions about the Indian Ocean exchange network. Tracing the movement of goods from place to place is relatively easy. With pottery, for example, members of a single community tend to repeat the same decorative styles over time. Stone, clay and other raw materials, used to produce objects ranging from anchors to gold bullion, have unique chemical signatures that vary by geographic location and can be traced back to their source.

Figuring out how the goods were moved is a little harder. Ships are rare finds, and inland caravans even rarer. One thing scholars know for certain is that the very nature of the ocean trade made prolonged periods of interaction necessary: The currents of the Indian Ocean change seasonally, and traders had to wait for months until currents shifted in favor of the return voyage. For many seafarers, these foreign ports became a second home.

However, outside of the ports mentioned in a handful of ancient texts, it’s unclear just how merchants, and their goods, traveled inland.

This bust of a “priest king” from the Indus Valley site of Mohenjo-Daro is about 4,000 years old. Its carver may have eaten millet imported from Africa via the Indian Ocean trade network. (Credit: EA/A. Dagli Orti/De Agostini/Getty Images)

Kefilwe Rammutloa, a graduate student at the University of Pretoria, is building a database to trace the distribution of exotic goods at sites across southeastern Africa. She’s finding evidence that suggests members of indigenous communities exchanged these items, often as gifts, rather than professional merchants establishing trade between towns.

Like Wood, Rammutloa has uncovered a social aspect to the items. Mapungubwe, for example, the first indigenous kingdom of southern Africa, was rich in ivory and gold — but bodies found in its cemeteries were interred with glass beads from Persia and porcelain from China.

“People used the materials to create relationships,” says Rammutloa. “We’re talking about humans here. Someone gives you a gift, they’re negotiating a role in your life. It creates a network."

Indian Ocean trade never truly disappeared. Beginning in the 15th century, however, with the expansion of European exploration and China’s withdrawal from international affairs, the world’s economic focus shifted westward.

In the centuries that followed, few researchers studied this early and extensive trade network. Says Wood: “It’s the European background of the people writing the histories, including our own. There’s more work being done now, but part of the problem is that we depend on written documents, and there are a lot less [for the Indian Ocean trade network]. It’s also a question of language. I’m sure there are a wealth of documents on it hidden away in China, but someone’s got to translate them.”

On the Indonesian island of Sumatra, a hoard of Chinese coins found in a river estuary attest to regional commerce routes combining to create the greater Indian Ocean network. (Credit: Marilee Wood)

Other forces, from unstable governments to international sanctions, have also stymied research in the past.

“The political past of South Africa has left a huge gap,” says Rammutloa. “It’s only now, after apartheid, that we’re able to get involved in international projects.”

Over the past decade, dozens of regional research programs have developed in coastal Africa, and connected with peers in Europe and Asia, in a way re-creating the trade routes they study. Only now they’re exchanging information rather than goods.

This article originally appeared in print as "Trading Places."