The hidden face codes of fish 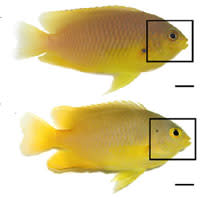 Take a look at these two fish. At first glance, they seem incredibly similar but in fact, they belong to two separate species. The one on the top is an Ambon damselfish (Pomacentrus amboinensis) and the one on the bottom is a lemon damselfish (P.moluccensis). If the distinction is hard for us to grasp, it's because we're not looking with the right eyes. The fish have a secret communication channel that's hidden to us. To hack into it, we need to look at the fish under an ultraviolet lamp.

The glare of a UV light reveals that the even yellow colours of the damselfishes' faces are actually streaked with complex patterns. These masks are like facial fingerprints. They are the key to telling one species from another and they may even allow the fishes to distinguish between individuals, just as we humans recognise friends and family from their facial features.

Ulrike Siebeck from the University of Queensland deciphered these visual codes by relying on the fact that damselfish are unusually aggressive towards members of their own species. These potential competitors must be seen off by charges and bites.

She confronted a male Ambon damselfish with two males from each species in separate plastic tubes. In the majority of cases, the territorial homeowners attacked the other Ambon far more than the lemon male. However, if the interlopers were housed in tubes that filtered out UV light, the homeowners still attacked but directed their anger at both fishes equally. So Siebeck had cracked the medium of the fishes' communications. Now she needed to work out how the messages were encrypted.

She created black-and-white images of their facial patterns and trained Ambon males to nudge one of the patterns for a tasty treat. The fish were trained on either the pattern of their own kind or that of the lemons, and later, they had to choose between one of each. They did so with admirable success, choosing the correct image around 75% of the time - not perfect, but far greater than expected if they were guessing randomly.

The use of UV signals as a species badge is very surprising, not because animals don't communicate in UV, but because UV vision has never really been associated with detail. For a start, it scatters easily in air and water. Some animals can indeed see in the ultraviolet, but they have few cone cells devoted to the task and their abilities are mainly restricted to sensing "broad and bold" bursts. UV is allegedly the blunt instrument of the visual spectrum, ill-suited to the discriminatory finesse that reds are better for. But the damselfish, apparently, cares not for such brash generalisations.

Siebeck suggests that the very fact that UV patterns are hard to make out is a boon to the Ambon damselfish. Males often live in close quarters with large harems of females. The rest of the fishes' yellow colours are fairly uniform, relatively well camouflaged against their brown backgrounds, and not characteristic enough for distinguishing between species.

Their UV masks, however, provide a secret way of establishing their identity at close range, in a way that's invisible to any fish more than a few body lengths away, and certainly to watching predators. In fact, the most common local hunters, like wrasses, rock cod and coral trout have eyes that block out UV light for the sake of better contrast and less retinal damage. They're like humans in that respect. These adaptations clearly benefit them and us, but it also locks us out of a world of hidden signals and elaborate masks, which only the damselfish can see.