You might have heard that refrigeration is sacrilege for tomato storage. Is this true? 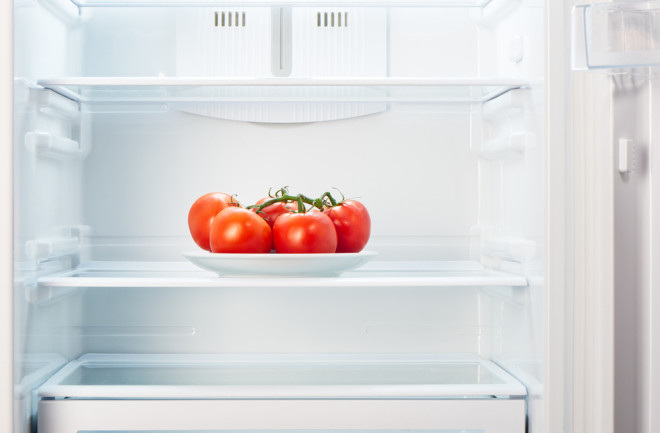 People love a good tomato debate. Grape or cherry for salads? Brandywine or big beef for backyard gardens? Then there’s the ever-popular issue of storage: Should you, or should you not, put tomatoes in the refrigerator?

Science has previously told us to keep tomatoes at room temperature for optimal taste. But foodie eyebrows were raised earlier this year when research out of Germany suggested refrigeration might be OK after all. “A New Study May Have Just Changed the Advice on Storing Tomatoes in the Fridge,” exclaimed one headline. “Finally, the Question of Our Time Has Been Answered,” announced another. Well, maybe.

A study from the University of Göttingen in Germany compared the taste of three tomato varieties, or cultivars, that had been handled under conditions emulating a distributor and a retailer. Then the tomatoes were either chilled or stored at room temperature. It found that the biggest differentiator for taste was the cultivar — not storage conditions. They concluded that short-term storage of ripe tomatoes in a refrigerator did not harm the flavor, according to their work published in Frontiers in Plant Science earlier this year.

But a closer look at the body of work on tomato storage muddies the picture.

“If you take the literature as a whole, the story is much more complicated than you shouldn’t or should refrigerate tomatoes,” says Harry Klee, a molecular biologist at the University of Florida in Gainesville. Klee was the lead researcher for a different study, published in 2016 in PNAS, about the impact of refrigeration on tomato taste. His team’s conclusion: Don’t refrigerate, like the packaging reads on NatureSweet Cherubs — "It's too cold in there!"

To quantify taste and quality, both studies measured the chemical compounds present in the fruit before and after chilling and also conducted taste tests. However, the two studies used methodologies with meaningful differences in varieties tested, chilling temperatures, and length of time chilled. While they are among multitudes of tomato-taste studies, comparing the two offers insights into why the tomato-refrigeration debate isn’t as, well, debatable as it seems for the average American consumer.

To Chill or Not to Chill?

But the anti-refrigeration study from 2016 took a different approach. Klee’s team harvested two tomato varieties, also ripe: an heirloom and a tomato from a modern breeding line that’s parent to a popular garden hybrid. They refrigerated them at 41 degrees across three durations — either for one, three or seven days. Then, the tomatoes were taken out of the fridge and left at room temperature for one day.

As Klee explains it, cold temperatures suppress the expression of many genes, some of which are responsible for the enzymes that synthesize the chemicals in a tomato that impart taste and aroma. His research showed that many of the enzymes didn’t recover after being chilled. Chilling also led to changes in DNA methylation, a mechanism for turning genes on and off.

It’s worth pointing out that the tomatoes in the pro-refrigeration study faced less chilly conditions, and for fewer days — a detail that reflects “the common post-harvest handling of fruits grown in Germany,” says Larissa Kanski, the lead author of the work and a doctoral candidate in agricultural sciences. In other words, the researchers simulated a more localized distribution scenario. It’s notable, too, that the Germans’ refrigerator temperature was at 44.6 degrees, which is higher than the 41-degree storage conditions used in the 2016 study. This is also a few degrees higher than the U.S. Department of Agriculture’s recommendation for household refrigerators, at 40 degrees or below.

And despite the catchy news headlines above, the German researchers actually say that chilling a tomato — which is, after all, a tropical fruit — isn’t ideal. Although their work found that taste depended more on tomato type rather than storage method, the team only accounted for the effects of short-term refrigeration. “We would not promote the cold storage of tomatoes,” says Kanski. “The colder and the longer the duration, the more severe the negative effects of chilling.”

But for the American-household consumer, it might be a fruitless point.

Klee and fellow researcher Jim Giovannoni, both of whom have extensive experience studying the science of tomato ripening and quality, stressed that American consumers who purchase their tomatoes from supermarkets have already lost the refrigeration battle because of the distances the fruit travels. By the time you come home and tussle with your spouse about how to store the Romas, they’ve probably been refrigerated a week or even more. And they were probably picked green.

“I think the simple message still, to my mind, is don’t refrigerate your tomatoes,” says Klee. “Can you? Under certain circumstances? Absolutely.” But be prepared for mixed results depending on the variety, when it was harvested, and how far it traveled to reach you, and how long you let it sit at room temperature before slicing it for your burger.

Both studies, and plenty of other research, have found that different cultivars tolerate refrigeration differently. That helps growers who may be seeking a more flavorful product that can survive the supply-chain process. Studies like these help answer some important questions. “Are there changes in temperature [in the storage and shipping process]? Is there a need to think about genotypes when you’re breeding?” said Giovannoni, a molecular biologist with the USDA. “Because if you’re measuring that, you could probably breed for things that will taste better after being in the cold.”

That’s good news if you’re pining for a perfect tomato sandwich. But the trick is to deliver the tomato in a way that won’t compromise its quality, and at a price people will pay. “The post-harvest handling system is a separate challenge that really is much bigger in some ways,” says Klee.

“There is a lot to discover about the flavor metabolism,” Kanski says. “However, it is definitely a very difficult attribute because it is so influenced by so many factors.”

No one is ready to throw in the tomato towel.

Klee sees a dramatic shift in public interest in tomato taste, giving growers and distributors incentive to support work like his and, ultimately, put better products on store shelves. And as Giovannoni points out, science has already produced more tomato choices for the discerning consumer.

“The goal has been to create varieties that have at least the potential for great flavor,” adds Klee. “It has taken almost two decades to get there. But we’re close. We can at least fix the genetic potential for flavor.”

That seems to be the more interesting debate for science. Refrigeration, not so much.

"I don't really see it as being that big of an issue," says Thomas Orton, a horticulturist, breeder and geneticist at Rutgers Agricultural Research and Extension Center. Orton has developed several cultivars used by East Coast growers for fresh markets and for processing.

Depending on when tomatoes are harvested, Orton says, a household consumer can probably keep them at room temperature for a week or more. Don't think you'll eat them soon enough? Go ahead and put them in the fridge so they don't spoil, "and there probably will be some loss in tomato flavor as a consequence. So, I think that's probably where we stand as far as what science tells us about how to store tomatoes."