The Grandmother Hypothesis Could Explain Why Women Live So Long 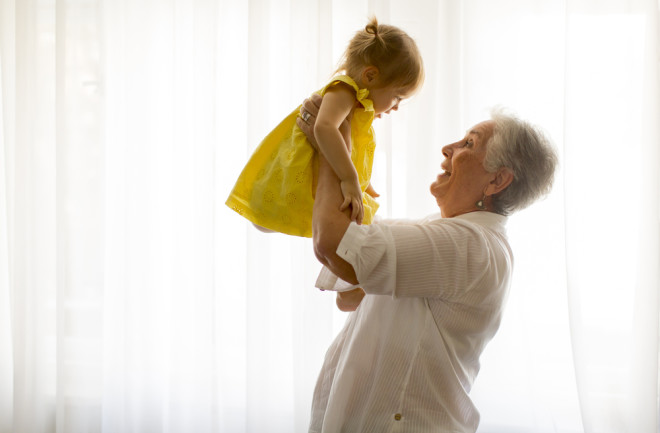 The grandmother hypothesis states that women live well past menopause so that they can help raise successive generations of children. (Credit: Goran Bogicevic/Shutterstock) From an evolutionary perspective, the point of life is to procreate and pass on genes. That’s why most animals keep reproducing until their deathbeds. Yet in humans, females tend to live for decades after they're no longer fertile. All around the world, women experience menopause at around age 50 and routinely continue living into their 70s or 80s. Few other primates ever live long enough to make it through menopause. The rare individuals that do are usually zoo captives, who survive just several years more. Looking out across the entire animal kingdom, the only species known to have substantial numbers of females living past reproduction are four types of whales (killer, beluga, short-finned pilot and narwhal) and one insect, the aphid, Quadrartus yoshinomiyai. So it’s weird that women (as well as whales and aphids) live beyond menopause. As a woman, I’m pleased. But as an anthropologist, I’m puzzled — and I’m not alone. Researchers have long vexed over this evolutionary anomaly. One compelling explanation is that women live past menopause to help raise their grandchildren. According to this “grandmother hypothesis,” ceasing reproduction around age 50 allows older women to devote care and resources to their children’s children. In this way, grandmas still ensure the survival of their genes — those genes are just two generations down the family tree. This is considered a better strategy than older women attempting childbirth, which becomes riskier with age. The idea is certainly appealing, but is it supported by evidence?

Building on the suggestions of earlier biologists, (Medawar 1952,Williams 1957,Hamilton 1966), anthropologist Kristen Hawkes of the University of Utah began seriously formulating and investigating the grandmother hypothesis in the 1980s and '90s Since then, Hawkes and others have tested it using ethnographic data, historical records and computer simulations. If the hypothesis is correct, at a certain age, grandmothering must bestow greater evolutionary fitness (genes passed to future generations) than mothering — a tall order considering grandchildren only carry one-quarter of your DNA, whereas children have half. That means you’d need to raise two grandkids to equal the genes transmitted by just one child.

Female beluga whales also live well beyond menopause. Could the grandmother hypothesis explain why? (Credit: Navidim/Shutterstock) But the chances of successfully birthing and raising children diminish with age. The grandmothering hypothesis assumes this eventually causes the scales to tip: At some point women gain more fitness by helping grandkids than from having their own. Furthermore, if menopause age and longevity are genetically coded, inherited traits, moms with optimal timing for both would have more descendants, also carrying those genes. Over time post-menopausal life would become more and more common, until every Homo sapiens female was born with DNA telling her to shut down fertility decades before the rest of her body.

Measuring the Value of Grandparents

One way researchers have sought evidence for the grandmothering hypothesis is by analyzing demographic and economic data from diverse cultures. In particular they’ve tried to determine how much of a difference grandmothers make. Studies of present-day foragers and traditional farmers show that elders contribute considerable resources to their families. Although grandmas aren’t reproductive, they're highly productive in acquiring food and other chores. For instance, a 2010 paper reported economic productivity — measured as daily calories brought home — among the Tsimane people of the Bolivian Amazon. Productivity for these women peaked in their 40s-50s and remained high until death. In their 60s, females directly provided grandchildren with about 500 calories per day. Other scientists have analyzed historical records of births, marriages, deaths and so forth from pre-industrial societies. This work has shown that when grandmothers were present, more grandchildren were born and survived through childhood.

A Malagasy grandmother in Madagascar. (Credit: Nok Lek/Shutterstock) One such study, published last February in Current Biology, focused on French settlers in the St. Lawrence Valley in Canada between 1608 and 1799. The dataset included 3,382 grandmothers, 34,660 children and 56,767 grandchildren. In this population, women with a living mother (to act as grandmother) had twice as many babies as ladies whose mother had passed. But when the grandmother lived over 200 miles away the effects diminished. This supports the idea that it’s direct help from grandma making the difference. Another study in the same journal issue probed church records from pre-industrial Finland from 1731-1895. Among the team's findings: Children with maternal grandmas between 50-75 had about a 30 percent better chance of surviving ages 2-5 than kids with dead maternal grandmas.

However, the above studies only show that grandmothers benefit children in traditional societies. They don’t prove that the helpfulness of grannies caused post-menopausal life to be favored through evolution. Life-after-reproduction may have arose for other reasons, and grandmothers became useful after the fact. Perhaps post-menopausal women are merely a side-effect of increased lifespan in both sexes or a way to safeguard against mothers dying while their children are young. In order to really test if grandmothering caused female post-reproductive life, we'd need to conduct an impossible experiment: Have one batch of women continue procreating until death, while another group eventually forgoes reproduction and helps with grandbabies. Wait some 10,000 to 1 million years and see which group has more living descendants. Though we can’t run this experiment in reality, researchers have done it with computer simulations. They begin with a population of, say, 1000 human ancestors (half male, half female) with lifespan and fertility window as heritable traits that can evolve over time. Other factors are also included such as age of sexual maturity, age at first birth and number of years between children. After running the simulation for hundreds of generations, the researchers see what kind of reproductive patterns exist in the descendants. And the results are mixed. Depending on the assumptions and variables included in the simulations, the grandmother hypothesis has been challenged, supported (here, here), or said to be one factor among several that led to menopause. The matter remains unsettled, but “grandmothering” is still the preferred hypothesis of many anthropologists and — I'm betting — grandmothers.