The geometry of their shells keeps turtles from getting stuck on their back. 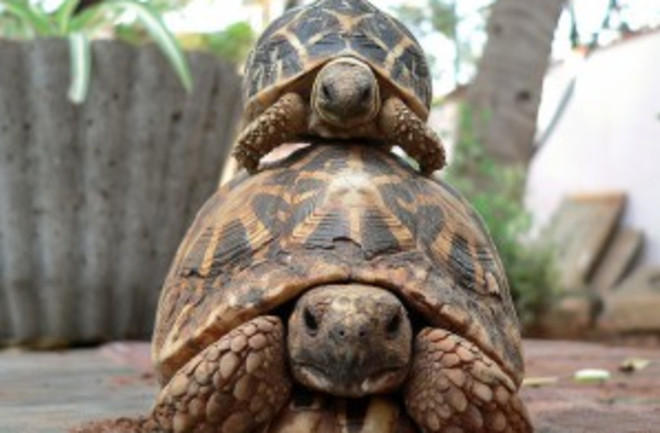 Image: flickr/Mikhail EstevesAlthough the Teenage Mutant Ninja Turtles didn't seem to have this particular problem, it's commonly thought that once a turtle gets stuck on its back, it's pretty much doomed. While it's true that turtles, like other animals with shells, can have a hard time righting themselves when flipped over, they aren't helpless. In fact, according to these mathematicians, the domed shell of land turtles is shaped in a nearly optimal curve to help the turtle flip back over. As Donatello would say, "Turtle Power!"Geometry and self-righting of turtles. "Terrestrial animals with rigid shells face imminent danger when turned upside down. A rich variety of righting strategies of beetle and turtle species have been described, but the exact role of the shell's geometry in righting is so far unknown. These strategies are often based on active mechanisms, e.g. most beetles self-right via motion of their legs or wings; flat, aquatic turtles use their muscular neck to flip back. On the other hand, highly domed, terrestrial turtles with short limbs and necks have virtually no active control: here shape itself may serve as a fundamental tool. Based on field data gathered on a broad spectrum of aquatic and terrestrial turtle species we develop a geometric model of the shell. Inspired by recent mathematical results, we demonstrate that a simple mechanical classification of the model is closely linked to the animals' righting strategy. Specifically, we show that the exact geometry of highly domed terrestrial species is close to optimal for self-righting, and the shell's shape is the predominant factor of their ability to flip back. Our study illustrates how evolution solved a far-from-trivial geometrical problem and equipped some turtles with monostatic shells: beautiful forms, which rarely appear in nature otherwise." Related content: Designing ergonomic hand grenades. NCBI ROFL: Phase 1: Build an army of remote-controlled turtles. Phase 2: ? Phase 3: Take over the world! NCBI ROFL: How long does roadkill linger on the pavement?