The Flamingos' Future: Lessons From A Race To Rescue Thousands of Abandoned Chicks 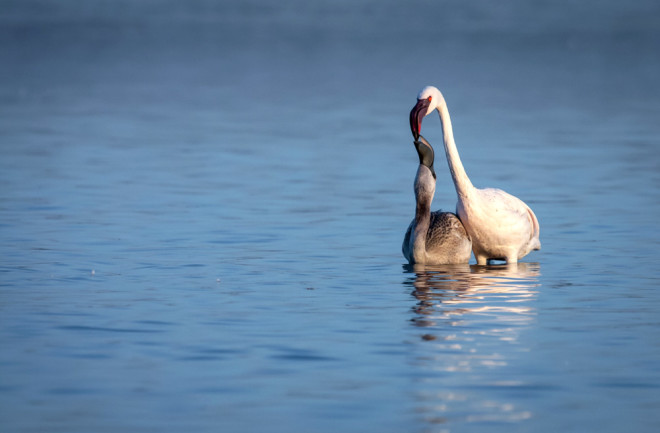 A lesser flamingo parent feeds its chick at breeding site at Kamfers Dam, South Africa. A drought that hit the area earlier this year forced flamingo parents to abandon thousands of chicks, which sent volunteers scrambling to save the birds. (Credit: By Stephan Olivier/ shutterstock) The incessant “eep, eep, eep” of hundreds of hungry flamingo chicks bounces off the concrete walls of a feeding room at the SANCCOB wildlife sanctuary in Cape Town, South Africa. Teri Grendzinski reaches into a pen and plucks out a fluffy, pale pink chick. She grips it gently with one hand. The bird opens its mouth eagerly as her syringe squirts out a kind of warm shrimp milkshake. It’s noisy, hot work. To keep the chicks warm away from their nests, their rooms are heated to a balmy 86 degrees Fahrenheit. And there’s so many birds, volunteers have to feed them around the clock in shifts, mixing endless milkshakes and bringing in a fresh batch of flamingos as soon as the last one is finished. “(It was) overwhelming — in a good way,” says Grendzinski, an expert who normally works raising wild birds at the National Aviary in Pittsburgh. “There was so much work to be done. So much to be learned. … And we were running — sitting down was not an option.”

A group of rescued lesser flamingo chicks sun themselves at SANCCOB, a wildlife rehabilitation center in South Africa. (Credit: Courtesy National Aviary) The trouble started back in January, when drought and poor infrastructure sent water levels plummeting at a South African reservoir called the Kamfers Dam. It’s one of just six breeding sites worldwide for the lesser flamingo, the smallest of the six species of pink leggy birds. The drought’s timing couldn’t have been worse — thousands of chicks had just hatched. Their parents, unable to feed themselves, abandoned the breeding grounds, leaving their helpless chicks behind. By the time volunteers got there, the site was “littered with the bodies of hundreds of dead chicks,” the AP reported. “The cheeps of chicks trapped inside overheating eggs [could] be heard.” Wildlife officials ultimately stepped in. And 10 local conservation groups each agreed to each take in hundreds of chicks. Organizations around the world, including many zoos in the U.S. with experience rearing flamingos, sent resources, supplies and even people — like Grendzinski — to aid in the effort. Although lesser flamingos are the most abundant flamingo in the world, with a population in the millions, they’re also the most in danger of extinction. Lesser flamingos are down to only six breeding areas worldwide, most of which are in Africa. And their breeding strategy of nesting on shallow shores of lakes in drought-prone areas is rather disposed to catastrophe: This isn’t the first time a turn of fate has resulted in mass casualties at a breeding ground. This may all sound like the species is in major trouble, but it also could be a sign of the species’ resilience. Their numbers tend to bounce back, even after thousands of chicks die in a single event. And sometimes they do dodge a potential disaster: Shortly after this last rescue, 5,000 more chicks were abandoned at a separate part of the same site. But these chicks were just old enough to make it through on their own.

Flamingos build their nests up into great mounds, like this group, a relative of the lesser flamingo, at a colony in Cuba. Around the world, the birds prefer environments most animals would consider inhospitable. (Credit: Sergey Uryadnikov/shutterstock)

A flamingo’s nest looks like a mini volcano made of mud and stones. And at a major breeding ground like Kamfers, each nest is only a few feet from its closest neighbor. The nests dot the mud flat by the thousands. When volunteers first arrived to Kamfers Dam in January, they were met by an eerie scene. Atop every nest was either a single unhatched egg or a single newborn chick, quietly struggling in discomfort. The teams got to work. Volunteers loaded 30 chicks at a time into small, flat cardboard boxes with air holes poked in the top. These were transported by pickup truck and eventually airplane to the different rescue centers across South Africa. Their effort was unprecedented. Humans had never attempted to rescue a whole colony of chicks before. According to Mark Anderson, CEO of BirdLife South Africa who coordinated the efforts, the rescue was partly made possible by how close this breeding site is to town — other sites are in remote locations — and how closely the birds’ breeding activity is monitored. Never before has a mass chick-abandonment been documented with such visibility and enough time left to save the chicks. “Every bird matters for the survival of this species,” says Pilar Fish, Director of Veterinary Medicine at the National Aviary.

A lesser flamingo chick recovers after being abandoned at nesting site earlier this year. (Credit: National Aviary) Each chick at SANCCOB, one of the groups hosting the flamingos, has been outfitted with a microchip with a unique identifier. And each bird is scanned and weighed before each feeding to ensure it’s fed a unique amount of formula that keeps it growing at just the right rate — about 10 percent of its body weight each day. In the wild, these chicks would be eating crop milk. That’s a thick, protein-rich substance made in an organ inside their parents — their crop — and regurgitated to feed the young. But back at the flamingo rescue center, that task falls to a kitchen staffed with volunteers, who busily blend concoctions of their own: hard-boiled egg yolks, fish, prawns, shrimp, and extra vitamins. This will get loaded into hundreds of syringes, ready to fire away into hungry flamingo mouths. When there’s this many flamingos, Grendzinski says, by the time you’re done feeding them all, it’s time to start again. On top of the hundreds of shrimpshakes administered each day, there’s an absurd amount of cleaning to do: Every chick gets cleaned after it’s fed, and every pen gets cleaned after each round of feeding. And, since the chicks will be released back into the wild once they’re self-sufficient, the volunteers have to take extra steps to avoid the chicks imprinting on humans. They wear black gloves, pink compression sleeves, and pink t-shirts as they feed the chicks to try to mimic the colors of a flamingo parent.

Anderson is optimistic about the future of this breeding site at Kamfers Dam. Once infrastructure problems tied to an attached water treatment plant are fixed, he says, the water supply should remain more consistent for future flamingos. “We hope to ensure a sustainable inflow of water of suitable quantity and quality that will sustain a viable population of breeding lesser flamingos,” Anderson said in an email. “If the waste water treatment works was properly functioning, we could ensure enough water in the ‘lake’ independent of rainfall.” But the other five breeding sites aren’t in great shape, either. Lesser flamingos are adapted to harsh breeding environments — they love salty, alkaline lakes that are toxic to everything except the cyanobacteria that the birds eat. But even flamingos have their limits. Populations of these blue-green algae, a type of phytoplankton, can fluctuate dramatically. And that has a big impact on the birds’ numbers. When algae populations crash, it starves the birds. But when the algae see abnormally large blooms, it poisons them. For instance, 30,000 birds died in a single week in 2008 at their breeding site at Lake Bogoria in Kenya. Almost 44,000 dead were counted at Tanzania’s Lake Manyara in 2004.

A vast colony of flamingos wades in Kenya's Nakuru National Park, home to Lake Bogoria. (Credit: Gudkov Andrey/shutterstock) The water levels have to be just right, too. When water levels are too high, the birds either can’t build their nests or, if the timing is right, nests are flooded. That happened in 2010 at Kamfers Dam. And the birds are also susceptible to avian botulism, which killed over a thousand birds at Kamfers in 2013. Humans aren’t helping, either. The most populous breeding site — Lake Natron in Tanzania — was recently under the added threat of a proposed soda ash mine, but after a years-long battle with environmentalists the project was relocated. The Kamfers Dam site had a similar experience with a proposed housing development. Recent media reports say there’s a new proposal in the works to develop the site.

Hope for the Lesser Flamingo?

Teri Grendzinski feeds a flamingo chick at the SANCCOB wildlife sanctuary in South Africa. (Credit: National Aviary) Conservationists think that the lesser flamingos are okay, for now, though they’re putting all of their eggs — literally — into very few baskets. Breeding catastrophes at multiple sites in a single year, multiple years in a row, could endanger the entire population. Though it may seem unsustainable to hand-rear thousands of chicks year after year, those involved say this year’s rescue was a fluke event. The drought hit at exactly the wrong time — just after chicks hatched, but before they could take care of themselves. And people had to notice the abandoned chicks right away. Then, others had to step in and act without missing a beat. The odds of that happening again are low. But if it does, volunteers will be ready. Despite the grueling conditions, Grendzinski says her enthusiasm never faded. “It was really hard work, but it was also really fulfilling,” she says. “I felt like I made a difference. And, honestly, I didn’t want to come home.” Now, the flamingos are grown, and the work of the volunteers still caring for the birds is nearly done. They'll be carted and released back into the wild on Monday, May 6, where the flamingos will rejoin the rest of their old flock at Kamfers Dam. Conservationists hope the next breeding season will be more kind to these birds. Not too wet, not too dry, just right for a new crew of cute, floofy chicks to "eep, eep" all day while they drink real crop milk from their parents.