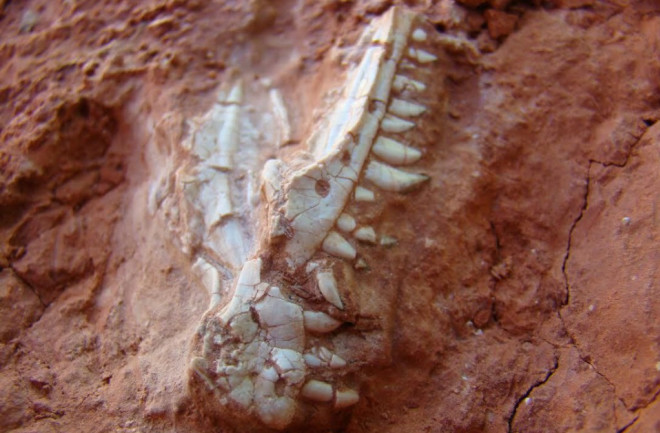 New species Buriolestes schultzi, seen here in situ, is one of the earliest dinosaurs known — and as you can tell from its teeth, it was no plant eater. Credit: Cabreira et al. Two new Triassic species found in Brazil and dating from the very Dawn of Dinosaurs are filling in some important gaps in the fossil record, including what one of the first dinosaurs ate (hint: not what you might think) and which other animals shared its space (spoiler alert: lagerpetids, dinosaur precursors — another surprise). A study published today in Current Biology reveals a doubly delightful find in southern Brazil's Santa Maria Formation: fossils from four individuals, including two new species from the earliest part of the Late Triassic, 228 million to 237 million years ago. Bonus: two of the specimens are in great shape. What makes the discovery even more exciting is that one of the new species is a dinosaur and the other belongs to a group of dinosaur precursors called the lagerpetids. This bolsters the idea that dinos and dino-daddies were coexisting for longer than we thought: Conventional thinking had long held that once dinosaurs were on the scene, the more primitive species quickly went extinct. (Or, in a variation of that that theme, once the more primitive species went extinct, dinosaurs quickly moved in. Either way, the idea is the dinosaurs and lagerpetids didn't overlap much). The lagerpetid individual described in today's paper as Ixalerpeton polesinensis includes the first skull, shoulder and forelimb examples from the dinosaur precursors, which is important for understanding how they eventually evolved into dinosaurs proper.

Deep in a Triassic forest, it was a dino-eat-dino world. Two of three larger Buriolestes schultzi chow down on prey (including a hapless rhynchosaur, center...the tongue sticking out is a nice touch, Mr. Illustrator) while two lagerpetids, dinosaur precursors, scamper in the foreground (one of them noshing on a caterpillar, the other possibly doing yoga). Credit: Maurílio Oliveira.

Take a good look at the artist rendering of a Triassic forest foodfest, above. You've got a couple of Ixalerpeton polesinensis (foreground), the new lagerpetid species described in today's paper. Behind these leggy, lithe little dino-precursors you see a trio of the bigger B. schultzi, an early dinosaur, taking a lunch break. What's crazy about B. shultzi is that at first glance it looks like a theropod, the lineage of bipedal, (almost entirely) carnivorous dinosaurs that includes such toothy luminaries as T. rex, Allosaurus and Velociraptor. But after analysis, researchers found that the beautifully preserved B. shultzi was the most basal, or earliest, member of Sauropodomorpha. Non-dino groupies might not know the word, but everyone has seen an illustration of the sauropodomorphs, at least the later ones, such as the titanosaurs and, most famously, Brontosaurus. These sauropods, also part of Sauropodomorpha, were enormous, quadrupedal herbivores, with long necks and long tails and giant digestion factories in the middle. But what about the early members of Sauropodomorpha? Researchers have found a few examples of transitional animals, such as Pulanesaura, which was a plant-eating quadruped 190 million years ago retaining some primitive traits. But now we've got Schultzie, showing us that the earliest members of this major dino-branch were bipedal and eating whatever animal they could catch — but plants, eh, not so much.

There is still a lot of debate about exactly when the first dinosaur evolved, and where, but today's announcement fleshes out an important part of the family tree. Expect to hear more from the team about the double discovery: both the dinosaurs and lagerpetids are undergoing CT scans to reveal more details about the animals.