The Final Adventures of the Blind Locksmith 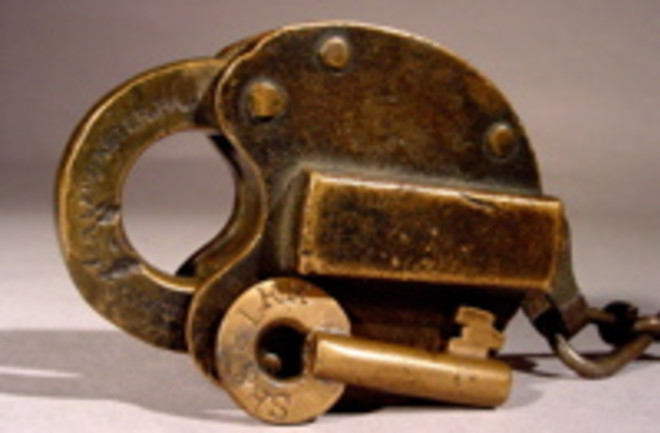 On Thursday I wrote about a new paper reporting the reconstruction of a 450-million year old hormone receptor, and experiments indicating how it evolved into two receptors found in living vertebrates such as ourselves. On Friday I took a look at the initial response to the paper from intelligent design advocates at the Discovery Insitute. They claim that there exist biological systems that show "irreducible complexity," which could not possibly have evolved. In response to the new research, intelligent design advocates claimed that hormones and their receptors do not actually make the cut as irreducibly complex systems. But to do so, they had to ignore their own published definition of irreducible complexity. As I mentioned on Friday, the Discovery Institute promised more, and more they have delivered. Not scientific papers published in peer reviewed scientific journals, of course, but a lot of press releases and such. There's a lot to wade through as of Sunday evening, and no doubt even more to come. But none of it amounts to much. They spend a lot of time rehashing their claim that irreducible complexity is not touched by this research. And they also use another standard strategy: raising doubts about whether a particular evolutionary scenario could take place, or whether biologists have done enough work to make their case. It's odd in a way, that they should go to these lengths. For one thing, they repeatedly claim that the whole experiment has nothing to do with irreducible complexity. For another, they dismiss this evolutionary change as minor stuff that they have no trouble with.

Not happily enough, it seems. Before I get into the objections, let me recap what the scientists found. They compared two kinds of hormone receptors, MR and GR for short. MR binds tightly to a hormone called aldosterone, and plays a role in keeping electrolytes in balance. GR binds to a hormone called cortisol and plays a role in stress, immunity, and other responses. The scientists found that MR and GR evolved from a common ancestral receptor, which was accidentally duplicated in the common ancestor of all fishes and land vertebrates. When they reconstructed the ancestral receptor, they found that it bound to aldosterone, cortisol, and a third hormone called DOC. This was surprising, since aldosterone evolved long after this receptor did. The result indicates that the tight link between MR and aldosterone was not there when MR first evolved. Instead, it must have bound DOC, which has a similar structure to aldosterone. Only tens of millions of years later did aldosterone evolve and become associated with MR in land vertebrates. The reconstructed ancestral receptor revealed an equally suprising story for GR. The main feature of its evolution must have been that it lost its aldosterone sensitivity and retained its sensitivity to cortisol. The scientists found that it changed by two amino acids. They tested out mutant proteins carrying each one of these changed amino acids (known as S106P and L111Q). L111Q on its own reduced the sensitivity of the receptor to all three hormones. S106P did not have the same effect as L111Q. It reduced sensitivity to aldosterone and cortisol, but left DOC response strong. Once the GR receptor had the S106P mutation, the L111Q mutation reduced the aldosterone response even more but then raised cortisol to the sort of sensitivity found in our own cells today. So the scientists suggested that this was the most likely path by which the ancestral receptor could have evolved into the GR receptor. Behe describes these mutations this way:

You get the notion that the receptor has been crippled in some devastating way. Indeed, Behe suggests, "One would think that the hundred-fold decrease in the ability to bind a steroid would at least initially be a very detrimental change that would be weeded out by natural selection." There's really no reason to think that. The response of receptors to hormones is not some simple one-to-one relationship that you can summarize with a single number. Here's the graph. Aldosterone is green, DOC is blue, and cortisol is red.

You can see how L111Q just pushes the response curve flat. Flood it with all the aldosterone, cortisol, or DOC you want, and you won't get any significant response. But S106P receptors still respond to the hormones. They just need a higher concentration. In fact, DOC responds much more strongly in S106P than in the ancestral form at high concentrations. But these concentrations are not abnormally high. Indeed, they're typically of many receptors in living animals. This graph offers no indication then that natural selection must have weeded out S106P mutants. Even if the shift in the DOC response did affect ancient fish, we can't forget that these fish also had the other kinds of receptors, MR, which are very responsive to DOC. In fact, the S106P might have even been able to survive even if it had been moderately harmful. Moderately harmful mutations can withstand natural selection if they are linked to beneficial genes, for example, if they exist in a small population where natural selection is weak. So nothing in what scientists know about how natural selection works says that the S106P pathway is prohibited by natural selection. But that's still not enough for intelligent design folks, of course. Behe writes,

"The authors do not test for that [that S106P would be weeded out by natural selection]; they simply assume it wouldn't be a problem, or that the problem could somehow be easily overcome. Nor do they test their speculation that DOC could somehow act as an intermediate ligand. In other words, in typical Darwinian fashion the authors pass over with their imaginations what in reality would very likely be serious biological difficulties."

Is it me, or is it strange that intelligent design advocates are telling biologists that they aren't working hard enough, that they are not getting enough results from their lab work? Remember, this is the same Michael Behe whose sole peer-reviewed paper in the past eight years was a computer model (and a pretty poor one, it turned out). Compare that to the work of Joe Thornton, the principal investigator on the new paper. In the past eight years he's published twenty papers on hormones and their evolution: he's been sequencing hormone receptor genes, working out how they respond to different hormones, determining how they're related to one another, and even resurrecting them after 450 million years of oblivion. All Behe is doing is complaining that Thornton hasn't done enough, without even bothering to explain how a scientist could even set up the sort of test he demands. The fact of evolution, which Discovery Institute folks like to ignore, is that natural selection is tough to measure precisely even in living populations. The challenge gets far greater after millions of years have passed. Scientists can detect the fingerprint of natural selection on various genes, but they may never be able to recover the precise chain of events that drove the evolution of a new kind of gene. Yet that doesn't mean that scientists can know nothing about evolutionary history. Here we have tightly integrated systems (MR, GR, and their hormones) which appear to have evolved stepwise from a common ancestor. Even though the receptors and their hormones are tightly integrated today, that doesn't mean that they couldn't have functioned without their partners. MR evolved long before its aldosterone partner did, and it just happened to have a structure that would allow it to latch on. As for GR, Thornton and co. have even showed which parts of the ancestral gene mutated, and offered a sequence of events by which those mutations may have taken place. And guess what? Thornton is now back in his lab right now, working with his colleagues to test their own hypothesis. The folks at the Discovery Institute folks might want to take a break from their empty complaints and give it a try. Update 4/10 3 pm: Ian Musgrave at Panda's Thumb explores yet another way in which Behe contradicts himself (even under oath!).