The evolution of the human face 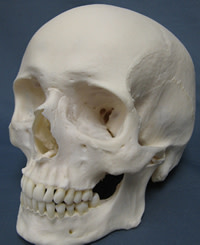 The face is an important aspect of our phenotype. So important that facial recognition is one of many innate reflexive cognitive competencies. By this, I mean that you can recognize a face in a gestalt manner, just like you can recognize a set of three marbles. You don't have to think about it in a step-by-step fashion. Particular types of brain injuries can actually result in disablement of this faculty, and a minority of humans seem to lack it altogether at birth (prosopagnosia). That's why I've long been interested in the genetic architecture and evolution of craniofacial traits. I long ago knew the potential range of pigmentation phenotypes for my daughter because both her parents have been genotyped, but when it comes to facial features we're stuck with the old 'blending inheritance' heuristic. The most obvious importance of teasing apart the genetic architecture of craniofacial traits is forensics. It might not put the sketch artist out of a job, but it would be an excellent supplement to problematic eye witness reports. But it isn't just forensics. The issue has evolutionary relevance. It looks like that in terms of morphology our own lineage has had a lot of diversity up until recently. I'm thinking in particular of the 'archaic' looking humans recently discovered in China and Nigeria, who seem to have persisted down into the Holocene. More generally, humans as a whole have become more gracile over the last 10,000 years. Why? There are two extreme answers we can look to. First, gracile humans have replaced robust humans. Second, natural selection for gracility has resulted in the in situ evolution of many populations over the last ~10,000 years. An interesting aspect of this is that it looks as if many salient traits have been targets of selection, and therefore evolution and population differentiation. Here the top 10 SNPs which deviate from the overall phylogenetic tree of population relationships in the HGDP data set:

There are two things I want to say off the bat. First, a given SNP likely has many phenotypic effects. So the trait that we "see" in terms of its effect may not be the same trait that natural selection "sees." Second, it is not a surprise that out of the traits that a given variant may affect the physically salient ones stand out; sometimes you do go looking where the light is shining on a dark street. We know that the lighter complexion of East and West Eurasians seems to be due to independent evolutionary events. In other words, they aren't derived from common ancestry. When it comes to hair form the EDAR locus seems to be responsible for the distinctive characteristics of East Asians, and has been under recent selection. What does all this have to do with craniofacial traits? Simple: the coarse and "skin deep" traits that physical anthropologists used decades ago to classify human beings have been rather informative to a first approximation of both details of phylogeny and natural selection. I see no reason why craniofacial traits should be any different. Humans have become more gracile, and some human populations seem to have been changing rather rapidly. I am highly skeptical that this is a neutral process. We care a great deal about facial features, and deviation from the norm can be arresting. If there has been change it is either due to population replacement, or selection (it could be a correlated response, or direct selection). It is with that preamble that I offer up Mark Shriver's abstract at the Modern Human Genetic Variation symposium:

The genes determining normal-range variation in human faces are arguably some of the most intrinsically interesting and fastest evolving. However, so far, little work has been focused on discovering these genes. Working under the hypothesis that genes causing Mendelian craniofacial dysmorphologies also may be important in determining normal-range facial-feature variation, and that those genes associated with population differences in facial features should have experienced greater levels of evolution (change in allele frequency), we have taken an admixture mapping/selection scan approach to identifying and studying the genes directly affecting facial features. We have applied the methods of automated quasi-landmark analyses, partial least squares regression, and individual genomic ancestry estimates to explore the distribution of facial features across two groups of human populations -- West Africans and Europeans. Using three samples of admixed subjects (American; N=159, Brazilian; N=197, and Cape Verdean; N=248) we have modeled facial variation in the parental populations and compared the extent to which estimates of ancestry from the face compare to genomic-ancestry estimates. We also have tested six selection-nominated craniofacial candidate genes for functional effects on facial features using admixture mapping. In objective tests, two of these six genes (FGFR1 and TRPS1) show significant effects on facial features. In addition, human-observer ratings of the similarity between subjects and allele-specific facial morphs show the same effects for these two genes. Additionally, exaggerated allele-specific morphs based on normal-range variation in these genes recapitulates the syndromic facies of the craniofacial dysmorphologies with which they are associated.

I asked Mark about the nature of these genes and the traits. The paper is coming soon, but he told me that he does not think that the genetic architecture of craniofacial traits is going be as simple or easy to characterize as pigmentation genes. On the other hand, he's reportedly capturing 35% of the African vs. European difference with his marker set, so that's not trivial, and some of the individual loci have a strong enough effect that it's visible by eye! Also, given the preserved extant diversity within populations (pigmentation genes are often disjoint across Africans and Europeans) he believes that the selection events are recent.