The extreme heat from the volcanic explosion in A.D. 79 vitrified, or turned to glass, a man's brain. 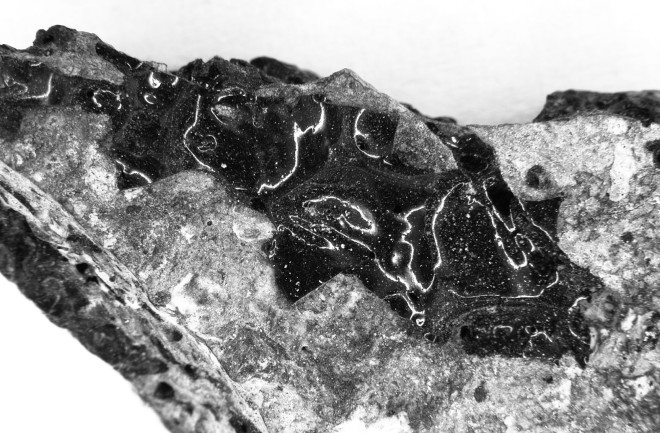 A shard of glass that was once brain matter. The eruption of Mount Vesuvius in A.D. 79 liquified and then cooled the organic tissue — a process known as vitrification — preserving a portion of the brain. (Credit: Pierpaolo Petrone)

When Mount Vesuvius blasted hot ash through Roman cities at a temperature of 950 degrees Fahrenheit, the cloud killed residents as soon as it hit them.

In one individual, the one-two punch of extreme heat and cooling ash deposits appears to have liquified and then rapidly cooled their brain tissue, leaving a thin glassy smear across the inside of their skull. The material preserved various brain and hair proteins, and is one of the first preserved ancient brains researchers have found.

A team of investigators describe these obsidian-colored streaks, and their contents, in a letter published this week in The New England Journal of Medicine. The official name for this glass-production process, called vitrification, is exceedingly rare, says paper co-author Pierpaolo Petrone, a forensic osteologist with the University of Naples Federico II. “To date, vitrified remains of the brain have never been found, neither human nor animal, neither in the archaeological field nor in recent forensic cases,” he wrote in an email.

Pompeii might be the better-known victim of Mount Vesuvius’ most famous explosion in the year A.D. 79, but inhabitants of another nearby town called Herculaneum also suffered. Since the 1960s, archaeologists have known that one body lay outside the shell of a building, and Petrone himself has been studying Herculaneum remains for over 20 years.

But only recently did Petrone walk up to the individual lying outside the building, which he was likely guarding. “Looking carefully at this victim, the last one still remaining on the site, I noticed something shining inside the head,” he says. “Just black fragments [with] a glassy appearance.” He had a feeling that he knew what this thin substance was, but it wasn’t until laboratory testing by his colleague, Piero Pucci, that Petrone confirmed it — this was the former brain of the Herculaneum resident.

It’s not clear why this unfortunate guard ended up with glass on the brain. Vitrified organs haven’t been found elsewhere on the site, and Petrone’s earlier research suggests that the extreme heat just evaporated everyone else’s soft tissue. Usually when archaeologists find preserved flesh it’s in the form of a soaplike substance that bacteria have made by digesting fatty acids.

It's not the first preserved ancient brain to be found. In one case, scientists found a brain in 2008 that had kept its shape for over 2,500 years, though they don’t know for sure how that happened, either. They suggest that perhaps some natural preservative dripped into the skull, or it was buried in low-oxygen soil, a condition that makes for a slow decay.

Vitrification is also valuable because it can preserve some of the original material. That’s why Petrone was able to isolate brain proteins and fatty acids from hair strands within the black shards.

As for whether he and his team can work backwards from those molecules and learn more about the Mount Vesuvius victim's identity, Petrone isn’t dropping too many hints. “This is an intriguing topic, which I've been thinking about,” he says. “It may be the subject of the next publication.”