A vastly outnumbered Greek force faces off against the invading Persian army in a fight to the death that still resonates today. 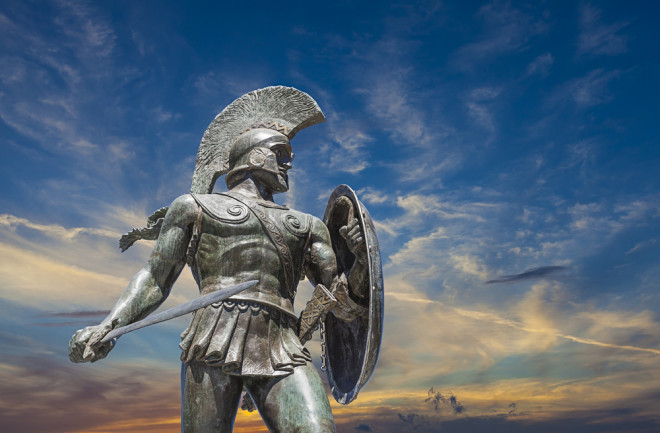 A memorial of the great Battle of Thermopylae in Greece depicting King Leonidas. (Credit: Mino Surkala)

There are few more captivating tropes in storytelling than the doomed band of heroes facing off against a far superior force. And there is perhaps no better precedent for this archetype than one of the first such examples in recorded history: The Battle of Thermopylae.

Perhaps better known today as “that battle from the movie 300,” the Battle of Thermopylae was an epic, three-day face-off between a small group of Greek soldiers and the massive Persian Army in 480 B.C. It’s little spoiler to say the Greeks lost. But the battle lives on to the present day largely due to the ideals of sacrifice, bravery and patriotism it represented.

It’s also a potent example of an outnumbered force using military and tactical advantages to their utmost and exacting a heavy toll on their enemy. Add in hubris, betrayals and eminently quotable speeches, and you’ve got the recipe for one great story.

A Battle for the Ages

The history of the Battle of Thermopylae comes to us today from a few ancient Greek historians, including Herodotus, the “Father of History.” Their accounts largely line up with each other, though they do disagree on a few minor points. Some recent archaeological work, such as the discovery of Persian arrow points, also helps to bolster the historical record of the battle.

Iron arrowheads and spearheads were found in the Koinos hill, where the last defenders of the Thermopyles fell, slain by the arrows of the enemy. (Credit: Therese Clutario/CC by 2.0/Wikimedia Commons).

Thermopylae is located in the southern part of the Greek mainland, near the coast. Because much of Greece is mountainous, the invading Persians were forced to take a fairly non-linear approach to the Greek heartland, one that wound its way along the coast. At a certain point, this route necessarily goes through a narrow pass, named Thermopylae.

Why was there an invading army in the first place? The answer lies in part with the failure of the first Greco-Persian war, a decade earlier, which ended in the Persian defeat at the Battle of Marathon (now famous for the race that bears its name). The Persians were also upset at the Greeks’ role in supporting the Ionian revolt, which had recently upended the eastern regions of the Persian Empire. The newly-crowned Persian ruler, Xerxes I, decided to pick up where his father, Darius I, had left off and conquer the pesky Greek city-states.

To do so, the Persians assembled a massive army, pulling soldiers from all regions of their considerable empire. Though historical estimates suggested the Persians numbered in the millions, more recent figures put their army at around 300,000 men or less — still a considerable force. Preparations for the invasion of Greece took around four years, and involved an impressive logistical outlay. Supply caches were stored along the route beforehand for the hungry soldiers, including great piles of salted meat and grain for the horses.

Xerxes also had a massive canal dug through the isthmus of Mount Athos for his ships, and engineers constructed a massive bridge made of boats lashed together across the Hellespont, a narrow canal (though still almost a mile wide at its narrowest) that separates Europe and Asia. With preparations complete, the Persians began their long march from modern-day Turkey, across the Hellespont and around the northern shore of the Aegean Sea. A similarly massive Persian navy also set sail for Greece around this time.

The Greeks, who’d been keeping a wary eye on the Persian warmongering, knew they had few chances to defeat the far larger enemy forces. The normally antagonistic Greek city-states, Athens and Sparta chief among them, had already brokered a fairly unprecedented alliance in the face of what they realized was a shared existential threat. Together, they settled on a plan: If they could force the Persians to meet them in battle at points where the Greeks had a territorial advantage, they might be able to eke out a victory. The pass at Thermopylae was a natural choice.

Situated where steep mountains ran nearly into the sea, the pass was the only clear path available to an army bent on invading the Greek homeland. It was narrow enough (perhaps a few hundred feet at the time) that the Persians couldn’t bring their full forces to bear on an enemy, meaning the outnumbered Greeks could face them on even footing. And existing fortifications there, built by the Phoecians, offered another layer of defense. It was here that an army of some 7,000 Greeks, led by the Spartan king Leonidas, chose to make their stand.

As Herodotus tells us, the Persians waited for four days after arriving at the pass to begin their attack. During this time Xerxes, sure of an easy victory, sent an ambassador who asked the Greeks to lay down their arms and retreat peacefully. Leonidas’ response, as recorded by historians, has become legendary: “Come and take them.”

On the fifth day, the Persians attacked. A wave of soldiers bore down on the Greeks, who had installed themselves in the pass in typical formation: A phalanx of spearmen with heavy shields overlapping. Wedged into the narrow pass, the Greek tactics proved devastatingly effective. They repulsed the first wave of attackers, and then a second group composed of the Persians’ finest warriors, called the Immortals. Xerxes, Herodotus writes, stood up three times throughout the course of the battle, fearful for his safety as he watched his best soldiers die in droves.

The next day of fighting went a little better, though Xerxes reportedly levied a death penalty at any soldier who retreated from their position. The Greeks sustained few losses while resisting the Persians' best attempts to break through their line. Their superior armor and long spears, combined with military tactics suited for the terrain they defended, likely helped give them the advantage.

But on that second night, a betrayal sealed the Greeks’ downfall. A local shepherd, hoping for a reward from the Persian king, offered to show the Persians a mountain path that could be used to bypass the Greeks and attack from the rear. Xerxes immediately dispatched a force of men under the commander Hydarnes. The soldiers marched through the night and, by dawn, were ready to fall upon the Greek positions.

Leonidas, alerted to the Persians' movements, made a quick decision. Faced with near-certain defeat, he sent most of his men away. A small contingent, Leonidas included, would stay to guard the pass and hold off the Persians for as long as possible. The remaining men included the famed 300 Spartans, as well as Thessalian and Theban soldiers. In all, they probably numbered around 1,500 men.

Around mid-morning, Herodotus writes in The Histories, Xerxes made his final assault. Persians closed in from both ends of the pass in a classic pincer movement. The Greeks, outnumbered and fighting to a certain death, “displayed the greatest strength they had against the barbarians, fighting recklessly and desperately,” Herodotus says.

The Persians, driven on by whips from behind, attacked and fell in multitudes. But ultimately, the sheer force of numbers prevailed. Leonidas was slain, and the few Greeks remaining retreated to the narrowest point of the pass to make their last stand.

“In that place they defended themselves with swords, if they still had them, and with hands and teeth. The barbarians buried them with missiles, some attacking from the front and throwing down the defensive wall, others surrounding them on all sides,” writes Herodotus.

The Spartans and Thessalians died almost to a man, while the Thebans, recognizing defeat, surrendered.

Though defeated at Thermopylae, the Greeks would ultimately prevail in the second Greco-Persian war, though not before Athens was sacked by the Persians. Following a naval defeat at the Battle of Salamis, Xerxes retreated to Asia, losing many men to disease and starvation along the way. Though he left a force to continue the invasion the next year, they too proved unsuccessful.

From a purely strategic standpoint, the Battle of Thermopylae wasn’t necessarily a defining moment of the Greco-Persian war. Later battles, like Salamis, which left the Persian fleet in tatters, would prove more meaningful. But the Battle of Thermopylae has little competition when it comes to sheer drama. It represented the struggle of the smaller Greek empire against an overbearing force bent on taking their homeland away from them, and forever enshrined the valiance of the Spartans.

The battle, though a loss for the Greeks, was a metaphorical victory of freedom over tyranny, and courage over fear. In the more than 2,00 years since, its allegorical powers have only grown stronger.