The enemy of my prey’s enemy is my friend, or Why parasitic wasps need each other 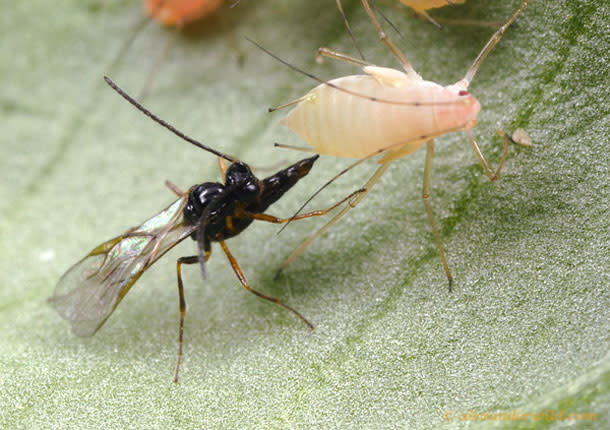 In a British lab, a wasp has become (locally) extinct. And then, another wasp follows it into oblivion. That’s odd because these two insects are not competitors. They don’t attack one another, and they don’t even eat the same food. They do, however, remind us that it’s very hard to predict how the decline of one species will affect those around it. Some consequences are obvious. If an animal goes extinct, its loss will cascade up and down the food web, so that its predators will suffer but its prey will probably thrive. But food webs are webs for a reason, rather than a set of isolated linear “food chains”. Consequences can ripple across, as well as up and down. The wasp study, by Dirk Sander and Frank van Veen at the University of Exeter, illustrates this well. They set up cages of plants and insects, resembling communities found in the British countryside. The cages contained broad beans, which served as food for two species of aphids – the black bean aphid

and the pea aphid

and Aphidius ervi – which lay their eggs inside aphids so their young are born into a living banquet. The wasps are choosy body-snatchers. L.fabarum only lays its eggs in the black bean aphid, while A.ervi only targets the pea aphid. If the two wasps were present in the same cage, they both did fine. If Sander and van Veen removed L.fabarum, then A.ervi didn’t notice. But if A.ervi was missing, then L.fabarum always went extinct within about six weeks. The reason for these trends is simple: the pea aphid naturally outcompetes the black bean aphid. Without A.ervi around to control the pea aphid, its numbers explode and it crowds out the black bean aphid from the broad bean plant. And with no black bean aphids, L.fabarum has nowhere to lay its eggs, and becomes extinct. This ecological Rube-Goldberg machine means that the two wasps are effectively cooperating with one another, even though they never actually interact. The loss of one can lead to the extinction of another, via a circuitous route that involves no fewer than four steps (wasp to aphid to plant to aphid to wasp). The message is clear: if we lose animals at the top of the food web, we can expect the unexpected. Reference: Sanders & van Veen. 2012. Indirect commensalism promotes persistence of secondary consumer species. http://dx.doi.org/10.1098/rsbl.2012.0572