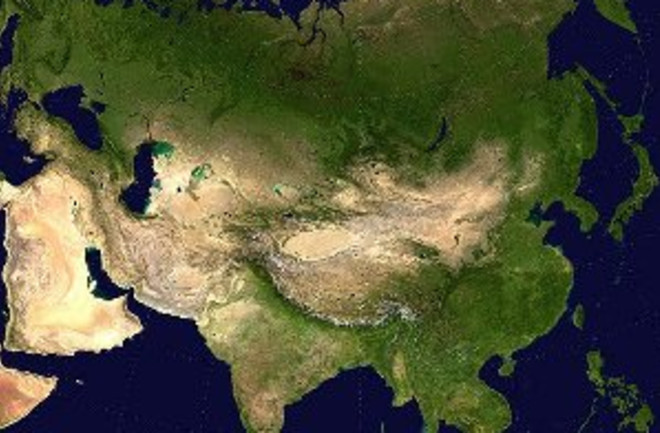 In a comment below I alluded to my idea that

the heart of Eurasia was relatively unpopulated before the Holocene

, explaining why many Central Asian groups seem to be recent hybrids from very distinct populations. Normally the sort of model which posits K ancestral groups is an idealization to some extent. To assign every K to a real known ancient population is probably not tenable in most cases. Not so for many Central Asian groups, for the K's often seem rather clear and distinct, and we have a fair amount of historical pointers. Thanks to Herodotus, the early Han dynasty chroniclers, and the Avesta, we have some sense of what the ethnography of Central Asia was like several thousand years ago. Additionally, it seems possible that highly advanced societies such as that of Bactria-Margiana were transferred from elsewhere. The heart of Eurasia may have been to a great extent a thinly populated frontier before the dawn of civilization, and so presaged our own "New World." But whereas the caravel opened up the trans-oceanic lanes, I assume that in Inner Asia it was the horse which allowed populations to cross the great waterless wastes efficiently enough that trade and people could flow robustly between the oases. The analogy between Inner Asia and the New World came to me when rereading Haplotype-Sharing Analysis Showing Uyghurs Are Unlikely Genetic Donors. Figure 2 shows "haplotype sharing" between various populations. The left panels compare Uyghurs to their putative parental populations, and the right panels African Americans. Observe how few "private haplotypes" the two populations which came out of a recent admixture have proportionally. The first shaded region in each panel are the private haplotype proportions, while the last shows haplotypes which span all three populations. The two intermediate regions are pairwise comparisons with the ancestral groups.