The Emporium is Now Open 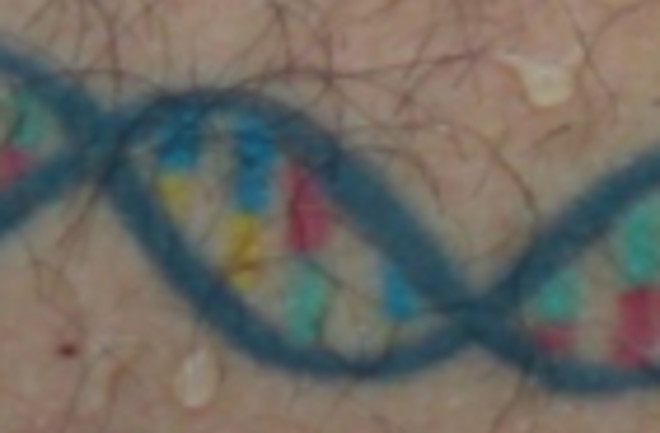 This is how the Emporium was born. Last summer I was at a pool party where a friend, Bob Datta, was bobbing around in the water with his kids. Datta is a post-doc at Columbia, where he studies genes in Drosophila flies. I noticed that Bob had a tattoo of DNA on his shoulder. At first I thought it was a generic snippet of the molecule, but then Bob told me that it actually represents, in the genetic code, his wife's initials: EEE. Geek love in its noblest form.

Bob's tatoo reminded me that I have seen other scientists festooned with their science. There was the mycologist whose arms were covered with a black mesh, which he explained to me was subterranean network of threads produced by the death cap mushroom. And then there was the developmental biologist whose arm is swathed in the image of the fish he studies. (He declined my request for a photo of the tattoo until he gets tenure.)

So I wondered--had I bumped into the tip of a vast hidden iceberg, or do I just happen to know the few scientists with tattoos of their science? I put out a call, and the answer was an emphatic yes. For months now, I've gotten dozens upon dozens of examples, and an astonishing number of visitors who want to see them. After trying out a few different formats, I've now made the Emporium their home.

If anyone wants to send me a jpg, I'll post it. If you're worried about tenure, just let me know how the tattoo represents the object of your study. The more personal the link, the better (i.e., not a generic tattoo of pi).

P.S. Bob later added a technical clarification: "I knew someone in this crowd would ask about the 12 bases but three codons thing! So, 3 codons don't give you two turns (wanted to approximate real DNA dimensions), so I needed at least four codons, all of which in this case are E (the single letter code for glutamate). E translates into GAG or GAA (I went with GAG GAA GAG GAA for variety), and used the colors green for G and amber for A. The complementary bases were coded C=Cyan and T=Tomato Red (ok, a bit of a stretch). So, you can see from the left - following one strand - Green Amber Green Green Amber Amber, etc.

My wife's first name is Eliza, and is known affectionately as Li, so I'm thinking seriously of getting a second tattoo (the first was her engagement present to me in exchange for the ring) of a Bohr model of a lithium atom. Helps too that we have two kids (so 1 Li + 1 Theo + 1 Jasper = 3).