The Earth's Oldest Diamonds May Show Evidence of Earliest Life 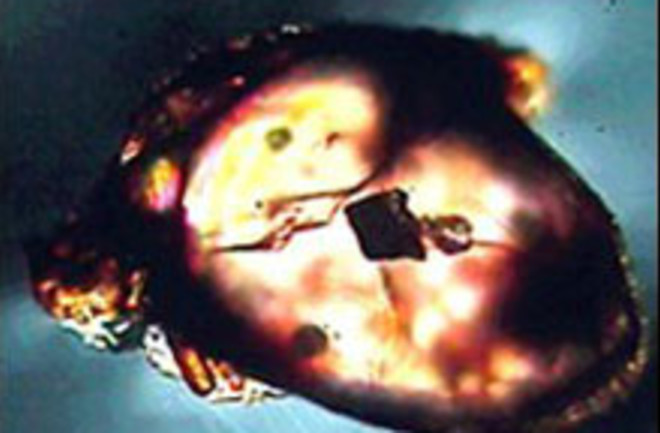 Researchers say that diamond fragments from the dawn of time may contain evidence that life began on Earth as early as 4.25 billion years ago, just a few hundred million years after the planet came into existence--although they also say that their findings aren't conclusive and that they may well be wrong.

Studying anything about the ancient earth is extremely difficult. Rocks that formed four billion years ago will long since have been beat up, metamorphosed, or melted [Nobel Intent blog, Ars Technica]. Researchers got around that problem by studying microscopic diamond pieces inside zircon crystals, which are themselves the tough remnants of ancient rocks that have long since disappeared. "We don't have the rocks. These zircons are just little fragments of something that was broken up, weathered and redeposited as sediments," explained [coauthor Martin] Whitehouse [BBC News].

Radioactive dating shows that the zircon crystals were formed more than 4 billion years ago, implying that the diamond fragments are at least that old. Scientists then studied the diamonds' composition, looking specifically at their carbon isotopes (forms of the carbon atom with different atomic masses).

One of the tell-tale signs of life is that the very process of living increases the levels of the lighter isotope of carbon. Oil and gas reserves are enriched in carbon 12 over carbon 13 because they were formed from the remains of living things [Telegraph]. Researchers found that same carbon 12 isotope in

the diamond specks, indicating that they may have been formed from ancient microbes that were buried deep underground and subjected to enormous pressure.

In the study, published in the journal Nature

[subscription required], researchers carefully point out that there are other explanations for the presence of the lighter carbon isotopes; they could have been produced by a chemical reaction, or could have been scattered on the Earth by meteorites. Still, the new findings raise the intriguing possibility that the Earth may have been hospitable to life even in its earliest, most chaotic phase. Image: Nature/M. Menneken