The 'Dorsal Straddle' Is a Newly Discovered Froggy Sex Position 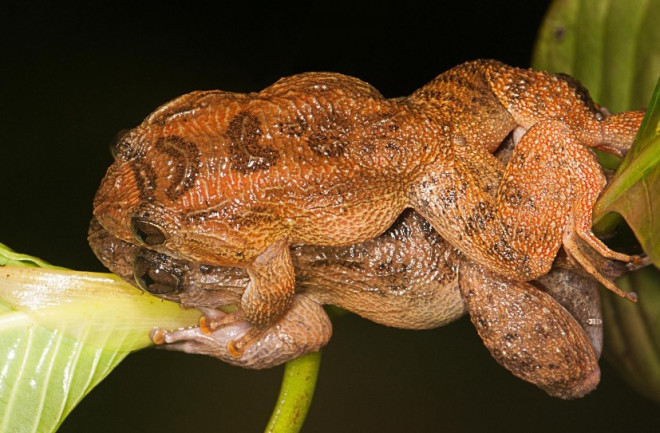 Bombay night frogs have added a new chapter to the Anuran Kama Sutra. There are roughly 6,600 species of Anurans – frogs and toads – worldwide, but for all that variety, these amphibians stick to one of six mating positions when it’s time to make more frogs and toads.

But Bombay night frogs, Nyctibatrachus humayuni, aren’t like other frogs; instead, mating couples wriggle into a newly discovered, seventh sex position that researchers christened the “dorsal straddle”. Don’t be surprised if this one soon appears in the Urban Dictionary.

Here’s a quick primer on the recently minted seventh mating position: The male straddles the female while grasping onto a leaf or a twig – on occasion, his hand may rest on her hand or arm. He then thrusts his hips, releases his sperm onto the female’s back and hops away. After that, she deposits her eggs and arches her back, funneling the sperm onto the clutch of eggs between her legs. She remains motionless while fertilization occurs. And that’s the dorsal straddle in a nutshell.

That’s not to be confused with the head straddle, which is the move preferred by mantellid frogs. The name speaks for itself. A research team led by University of Delhi professor S.D. Biju observed the novel mating position while studying Bombay night frogs for 40 nights between 2010 and 2012 in the dense forests located near Humbarli village in Maharashtra, India.

The team published its findings Tuesday in the open-access journal PeerJ.

Bombay night frogs don’t embrace, and egg-laying and fertilization occurs after the male hops away. These two behaviors make the dorsal straddle unique. Interestingly, the frogs hit a 100 percent fertilization rate, based on samples researchers gathered. Males, the researchers hypothesize, grab hold of a leaf or twig rather than the female to reduce the risk of falling off their perch.

For most frog couples, their dorsal straddling simply fueled the food chain. During researchers’ observation period, a snake gobbled up 80 percent of the egg clutches. It's the first time a snake was observed eating frog eggs in India, according to researchers.

All that work for nothing. (Credit: S.D. Biju)

Much to Be Learned

The genus Nyctibatrachus is endemic to the Western Ghats of India, and includes 28 known species, many of which were only recently described. Scientists still don’t know much about this particular branch of the frog family tree, but several studies have noted interesting reproductive behaviors in Nyctibatrachus species. The froggy Kama Sutra will likely grow as scientists learn more about them.

But time isn’t on researchers’ side, however. Species of Nyctibatrachus are particularly threatened by human activities, so knowing how they mate is key to building effective conservation efforts. More studies "exploring the unique and diverse (behavior) in Nyctibatrachus frogs are, therefore, badly needed," Biju's team wrote in its paper.

And, in case you're interested, researchers put together a video of Bombay night frogs' twist on fertilization.