The dog days of evolutionary genomics 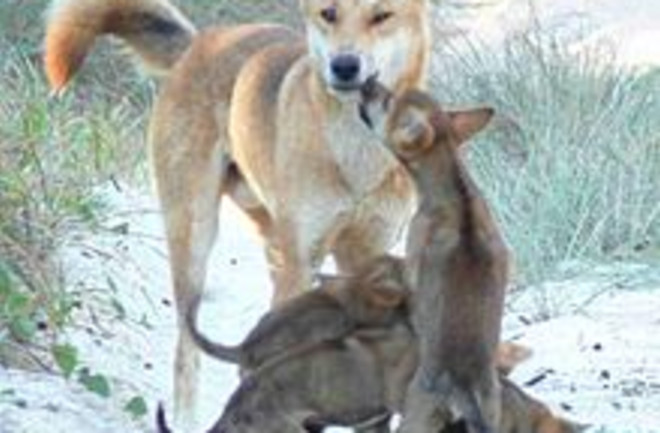 Credit: PartnerHund It's an exciting time for those interested in the evolutionary genomics of the dog. In 2010 a big SNP-array paper came out, Genome-wide SNP and haplotype analyses reveal a rich history underlying dog domestication. Today we're going whole genome, which is important because many of the SNP-arrays are ascertained on domestic dogs (i.e., they are designed to pick up dog variation, and so may distort our perception of the variation in wolves). Recently I talked about an analysis of the evolutionary genomics of the dog, The genomics of selection in dogs and the parallel evolution between dogs and humans. The main interesting result of that group was to push the divergence of the dog and wolf lineages further back in time, ~30,000 years, in line with some archaeological and mtDNA finds. I did not find their arguments for the origin of the dog in East Asian convincing. Now a new preprint on arXiv, Genome Sequencing Highlights Genes Under Selection and the Dynamic Early History of Dogs, pushes this even further. First, after reading the paper I recommend the comments at Haldane's Sieve, where the authors engage in some back and forth. Second, one of the authors put the supplementary information on a Dropbox, so you can get that too. I highly recommend this in particular, because it has detailed methods, code, and also concise but useful explanation of concepts such as D-statistics. Overall the paper breaks down into two broad themes, the phylogenetics and analysis of adaptation and selection. There was many X coverage of an Israeli, Croatian, and Chinese wolf, and a Basenji, Boxer, and Dingo. For the primary analysis the sample sizes were N = 1, but that is not a major issue as they had extremely accurate and precise estimates as to the polymorphism across these individuals because of the repeated coerage.

A major takeaway in terms of demographics for this paper is that it's complicated. The authors inferred that domestic dogs went through a population bottleneck in the past on the order of one to two magnitudes. Second, wolves also went through a population bottleneck, albeit milder. On the first read through I was surprised by the second finding, but after talking to a canine geneticist I was told that this wolf bottleneck had long been known. The genomics confirmed prior expectations rather than smoking out novel inferences. Perhaps a more surprising finding is that the ancestor of dogs, and yes, there was one ancestral population, not many, derives from an extinct wolf lineage. Their inference was derived from the fact that the three wolves, sampled from putative regions of dog domestication, all exhibit equal genetic distance from the dogs. Previous work had suggested that dogs may have derived from Near Eastern wolves, while other researchers argued for an East Asian origin. The results here support the proposition that these suggestions are misinterpreting genuine gene flow between local populations of wolves and dogs. The authors detected gene flow between West Eurasian wolves and the western dogs (Basenji and Boxer) and East Eurasian wolves and eastern dogs (the Dingo). On a minor note, these results also confirm a pre-agricultural origin for the dog, with a divergence of ~11-16 thousand years B.P. across the 95% confidence interval. This is at some discrepancy with the Chinese group, but this may just be an artifact of a different mutation rate parameter. The take home either way is that dogs pre-date agriculture. But that doesn't mean agriculture is irrelevant. As far as the adaptation goes there's a lot here, and I'm not sure that this paper has anything revolutionary in that dimension. First, they confirm that just as in humans there is variation among canids in terms of copy number in the amylase gene conditional on lifestyle. Dingos and Alaskan huskies have very few copies, while ancient West Asian dogs have many. Also, the authors find normal variation in wolves for this trait, implying that amylase polymorphism is part of standing genetic variations. I will leave it to you to survey the veritable alphabet soup of genes which have been buffeted by natural selection by evolutionary process when it comes to dogs. I'm more curious about variation within dog at this point, as there should be heritable variation there too. Cite:arXiv:1305.7390v2 [q-bio.GN]