The Dilemma of the Dinosaur Stance: How Did They Hold Their Heads? 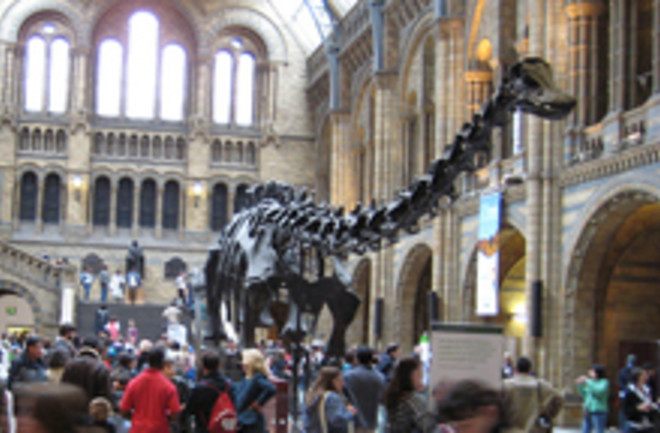 The lumbering, long-necked dinosaurs known as sauropods are a staple of natural history museums and gift shops, but a new debate has broken out that challenges the poses of the museums' life-sized replicas and the toy shops' plastic figurines. The mighty sauropods Brachiosaurus and Diplodocus are commonly positioned with their long necks stretched before them, but a controversial new study argues that they actually stretched their necks up to the treetops. If sauropods did indeed hold their heads aloft like giraffes, some would have stood almost 50 feet tall. For the new study, published in the journal Acta Palaeontologica Polonica, paleontologist Mike Taylor and his colleagues took the straight-forward approach of studying the x-rays of 10 different groups of vertebrate animals. Says Taylor:

"Unless sauropods carried their heads and necks differently from every living vertebrate, we have to assume the base of their neck was curved strongly upwards. In some sauropods this would have meant a graceful S-curve to the neck, and a look different from the recreations we are used to seeing today" [The Australian].

Taylor's group found that only animals closely related to salamanders, turtles, lizards, and crocodiles carry their necks in a horizontal posture. They noted that necks are nearly vertical in the animals that share the upright leg posture of dinosaurs, namely mammals and birds, the sauropods' closest living relatives.

Scientists had argued against the vertical posture in sauropods, saying that it would require an implausibly steep bend at the base of the neck. However, very sharp bends were seen in ostriches and giraffes, proving that such a physique is possible [The Times].

Yet Taylor's theory is meeting stiff resistance from some quarters. In another paper recently published in the journal Biology Letters, evolutionary biologist Roger Seymour argues that

Other experts say it's conceivable that sauropods held their heads high as they strutted over the primordial plains, but argue that Taylor hasn't proved his case. Says palaeontologist Paul Barrett:

"Sauropods are bizarre.... There is no living animal built in the same way." So, although the study of living animals' skeletons is very valuable, he added, "finding a model to explain the biology of these creatures is not that easy" [BBC News].

Related Content: 80beats: New Fossil Suggests That Fuzzy Dinosaurs Were Plentiful 80beats: Dinosaur Handprints Show It Could “Hold a Basketball,” Not Dribble 80beats: To Attract Mates, This Dino May Have Shaken a Tail Feather 80beats: How Did the Giant Flying Reptiles of the Jurassic Period Take Off?