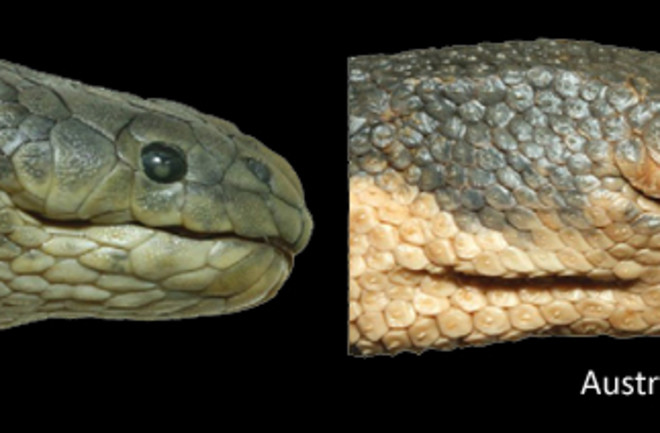 Sea snakes have some of the most potent venoms of any snake, but most of the 60 or so species are docile, rare, or sparing with their venom. The beaked sea snake (Enhydrina schistosa) is an exception. It lives throughout Asia and Australasia, has a reputation for being aggressive, and swims in estuaries and lagoons where it often gets entangled in fishing nets. Unwary fishermen get injected with venom that’s more potent than a cobra’s or a rattlesnake’s. It’s perhaps unsurprising that this one species accounts for the vast majority of injuries and deaths from sea snake bites.

But this deadliest of sea snakes has a secret: it’s actually two sea snakes.

By analysing the beaked sea snake’s genes, Kanishka Ukuwela from the University of Adelaide has shown that the Asian individuals belong to a completely different branch of the sea snake family tree than the Australian ones. They are two species, which have evolved to look so identical that until now, everyone thought they were the same. They’re a fantastic new example of convergent evolution, when different species turn up at life’s party wearing the same clothes.

More and more, scientists are using genetic studies to show that familiar animals are actually several different “cryptic species”, including killer whales and giraffes. Just last year, we learned that the famous Nile crocodile is actually two distinct crocodiles, a big one from east Africa and a small one from west Africa.

Like other members of this club, no one suspected that the beaked sea snake was actually two species. Bryan Fry from the University of Queensland, venom guru and co-author on the paper, had collected several individuals from Australia, to study their venom. (“They are the nastiest species of sea snake I've ever worked with,” he says. “That is another thing they both converge on!”)

As a matter of routine, he “barcodes” the DNA of every animal he collects, sequencing it at specific places that given away the identity of different species. Fry expected the genes of his Australian specimens to be similar to those of the Asian individuals. “When the first result came back, we thought we must have screwed up and ran a sample of [a different] sea snake,” says Fry. “So we re-ran it, and got the same results. That was when we started getting giddy.” And just like that, one sea snake became two.

The team examined the genes of 11 snakes from Asia and Australia, at seven different parts of their genome, and compared these sequences to those of other sea snakes. They reconstructed a family tree showing the evolutionary relationships of the group, which you can see it below. The Australian individuals lie in a set of branches at the top, and are most closely related to other Australian species. The ones from Sri Lanka and South-East Asia lie on an unconnected branch in the middle of the tree, with other Asian sea-snakes as their closest kin.

For now, the team suggests that the old species name of E.schistosa belongs to the Asian serpents, while the Australian ones get the new name of Enhydrina zweifeli (which had been used before to describe a single specimen captured from New Guinea.). The team also thinks that both species should lose their genus name of Enhydrina, since they are both deeply embedded within the Hydrophis genus. They would be reborn as Hydrophis schistosa and Hydrophis zwefeli.

Physically, the two species look slightly different. E.schistosa has fewer stripes, a slightly lower scale count, and subtle differences in its skull structure. But both have a deep notch between the two halves of their lower jaws, creating the “beaked” snouts that the “species” was named for. It’s thought that this notch helps them to widen their jaws even further than other sea snakes, to swallow the spiny catfish and puffer fishes that they prey upon. It’s possible that both lineages of snake took to eating these spiny mouthfuls, and both evolved deceptively similar jaws as a result.

Fortunately, even though the only anti-venom that we have was developed to counteract the Asian species, through a fluke, it also works against the venom of the Australian one.

This is just one of three separate sea snake discoveries that the team have made this year—and each one resulted in a new species!

In February, they captured nine specimens of a new sea snake, Hydrophis donaldi, with spiky scales on its belly.

In August, they showed that the known species Aipysurus eydouxii was actually two separate (but closely related) sea snakes. The two populations are separated by the deep Timor Trench, which cuts Australia away from Southeast Asia, and the team gave the Australian species a new name—A.mosaicus (the mosaic sea snake). Danish colleagues had originally identified A.mosaicus from specimens languishing in jars within a local museum (where new species are often found and described). Fry and Sanders then collected living individuals, and sealed the reclassification.

Both of these animals, and the newly coined E.zweifeli have been found in the Gulf of Carpentaria, between northern Australia and southern New Guinea. “Three new species all from the same location!” says Fry.  “There’s an insane biodiversity of sea snakes that has been neglected.”