The Dawn of Brains and Bones 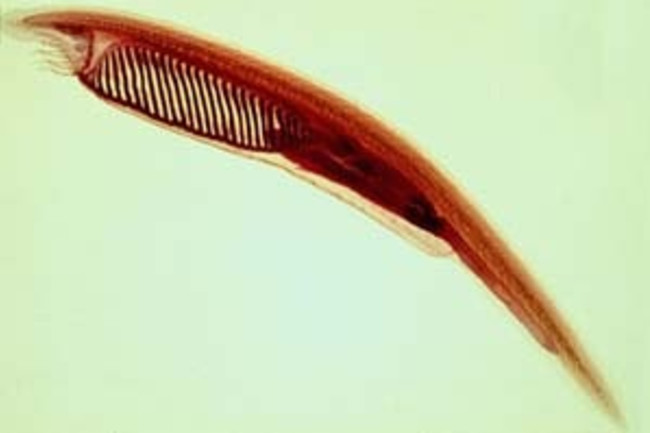 Go back far enough in our history--maybe about 650 million years--and you come to a time when our ancestors were still invertebrates. That is, they had no skulls, teeth, or other bones. They didn't even have a brain. How invertebrates became vertebrates is a fascinating question, made all the more fascinating because the answer tells us something about how we got to be the way we are. In order to reconstruct what happened, scientists can study several different kinds of evidence. They can look at the bodies of invertebrates to find the ones that share traits with vertebrates not found in other invertebrates. Those common traits may be signs of common ancestry. Scientists can look for signs of this ancestry by studying the DNA of vertebrates and invertebrates. They can also examine the fossil record, to discover transitional forms that offer clues to the transitions that can't be found in living species. When scientists consider this evidence, the answers don't come pouring into their lap like coins from a slot machine. They have to put together hypotheses that do the best job of explaining vertebrate origins.They can then test those hypotheses against new evidence. Sometimes the old hypotheses hold up. Sometimes it turns out they were based on a misreading of the evidence. New hypotheses emerge to take the place of old ones. But those new hypotheses have to be better than the old ones. Scientists do not just suddenly declare that any explanation will do. This is how science works. It occurred to me that this fact bears repeating when I read a recent comment to this blog. The comment emerged in a discussion about some observations from Randy Olson, a movie director, on how to communicate effectively about evolution. Some people agreed with Olson's ideas on livening things up, while others worried that he just wanted to dumb science down. The differences were real, but the discussion was productive--at least until a couple creationists chimed in. These creationists claimed to offer some helpful advice, but it's pretty clear from their comments (and their links to creationist web sites) that they really had nothing of the sort in mind. They don't actually want to help people understand evolution; they're just exploiting some common misunderstandings about evolution, and about science in general. They do provide one service, by showing which misundertsandings they think they can exploit most effectively. "Anonymous" writes:

"But you need to be honest about the scientific accuracy. How often does a new discovery come out that requires a rewrite of the evolutionary timelines and trees. If memory serves, I've read at least 2 posts on this blog in the last year with statements to that effect. How can you say Evolution is Science and Science is Truth and then in the next statement that Evolutionary scenarios must be rewritten. The public hears this."