The dance of the disembodied gecko tail

When danger threatens many lizards can detach their tails, leaving them behind as decoys in the hope that the predator will attack it rather than the lizard itself. But the tail doesn't just lie there as bait. For half an hour after they've been severed, the disembodied tails perform a complex dance, flipping, lunging and jumping up to an inch in the air. These acrobatics serve to distract the predator even further.

For the first time, Timothy Higham and Anthony Russell have studied the movements of severed gecko tails to understand how they can move in such complex ways without any input from the animal's brain. They anaesthetised four leopard geckos and implanted electrodes into their tails. Once the animals awoke, a small pinch in the right place was enough to prompt them to jettison their tails and scuttle for cover. As the tails started convulsing, Higham and Russell filmed them with high-speed cameras.

Their tips rapidly swung back and forth but between these rhythmic flexes, they behaved more erratically. They flipped by pushing the tip against the floor to launch the whole organ into the air and they lunged by doing the same, but horizontally.

These conspicuous movements increase the odds that an attacking predator will go for the tail instead of the lizard. But it's actually in the lizard's interests for both its body and its tail to escape being eaten - geckos and other lizards store valuable reserves of fat in their tails, and these are too valuable to leave to the jaws of another animal. As such, Higham and Russell think that the arrhythmic jumps and flips make the tail more unpredictable and harder to catch. They also increase the odds that the tail will flip to safety, say in a nook or crevice. The lizard can then return later to chow down on its ex-body part. 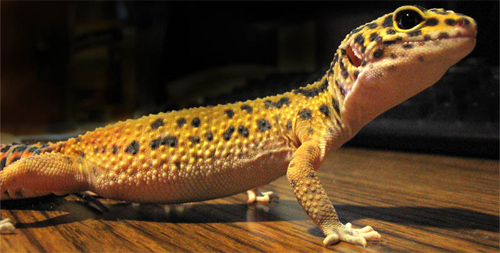 Many animals can move parts of their body without any active control from their brains thanks to special clusters of independently operating neurons called central pattern generators. These CPGs are found in the spinal cord and other body parts and can produce regular bursts of nervous impulses that drive everything from walking to swimming to breathing. These are the neurons behind the continued motions of headless chickens, or bisected insects.

In the case of the gecko tails, the CPGs within seem to be firing without any obvious motivation from the environment. That remains to be seen - it's possible that sensors on the tail's skin are getting some sort of feedback from its surroundings and sending signal to the CPGs, influencing the moves that they trigger.

CPGs are of great interest to biologists, especially for those interested in the spinal cord, and what happens when it's injured. But these neural clusters can be difficult to study. To do so, you need to sever any link between the brain and the spinal cord, which not only throws up practical difficulties, not to mention ethical ones. And for most animals, what you'd see as a result is an aberrant and deficient behaviour.

But not with lizards - the movements of their severed tail are part of their adaptive defences and have been crafted by evolution. Here we have an animal that voluntarily severs the link between its brain and a part of its body that contains CPGs. That makes them a great model animal for studying the workings of the spinal cord, and what happens when it becomes injured.