The Cretaceous Comes To My Front Yard 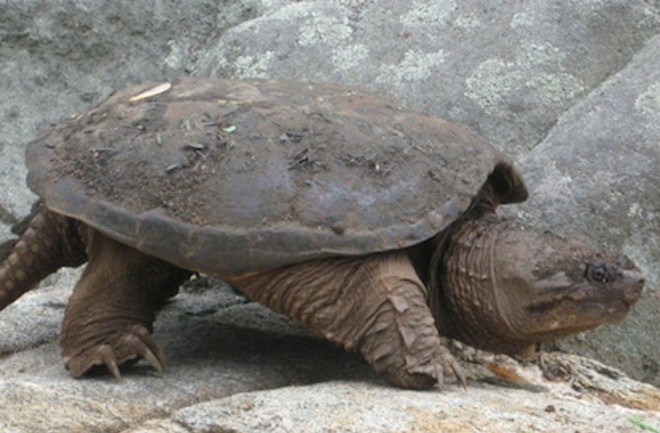 Sunday morning was cool and foggy, and so we were not surprised to discover the garden full of craters and trenches. A snapping turtle the size of a manhole cover was busy laying her eggs. This is an annual ritual in this part of New England. The first time I encountered a snapping turtle here, not long after we had moved into our house, I was terrified. Our children were toddlers, old enough to run but not old enough to know they should stay away from animals that can snap off your finger. Somehow I had to get the turtle out of my yard and back into the creek that runs behind our house. With no experience in turtle-wrangling, I decided to get a broomstick. I tapped the turtle on its shell, to signal that I wanted it to leave. It looked up at me with supreme indifference. My helplessness made me hallucinate. I feared the turtle was going to break into the house somehow and eat our cats. I called our town's animal control line, and ended up talking to a policeman. He gave me a suprisingly detailed lecture on the natural history of the snapping turtle. On cool, foggy mornings in late spring, he explained, females emerge from streams and wetlands to bury their eggs in the soft earth. They take care of their business in about an hour, and then they leave. He would not be coming to my house to rescue us. He was right. The turtle picked a lush bed of mulch and mud, near a rose bush, and laid her eggs. I stared at from the front door with my children until we got bored. When I checked back a few minutes later, it was gone. I never realized that a snapping turtle can disappear when it wants to. After a few weeks the eggs hatched. In the summer we discovered adorably vicious baby snapping turtles trying to find their way back to the water. Every spring since, the snapping turtles have returned, and we've gotten more comfortable with them. I don't bother the police. Instead, we get reasonably close to the turtle to observe. We usually get one snapping turtle visiting us each year. We're grateful, but we also know these visits are a shadow of a former glory. One of our neighbors, who grew up in our town, remembers armies of snapping turtles swarming up out of the creek in the spring. We live in biologically impoverished times, with constipated streams, filled-in marshes, and other assaults on the habitat of turtles in New England. Snapping turtles have been wandering out of marshes for millions of years. The oldest turtle fossils are about 220 million years old, but snapping turtles evolved much later. They belong to a 90-million-year-old lineage that also gave rise to species that span the extremes of turtle biology, from tiny mud turtles to leatherback turtles, the biggest reptiles on Earth, which swim across oceans.

This morning's visitation was particularly mesmerizing, because the snapping turtle angled her body in such a way that we could see her eggs drop into the hole she had dug. They were the size and shape of eyeballs. As the eggs eased out of her cloaca, she tapped them with her right back foot into the hole, like a soccer player giving a ball the extra kick it needed to reach the goal. One after another, the eggs tumbled out. We counted a dozen, but snapping turtles can lay dozens more at a time. They pick these nests carefully. They chose these spots for their temperatures. Like many other turtle species, snapping turtles end up male or female depending on the temperature. At low and high temperatures, they produce females; at intermediate temperatures, they make males. Snapping turtles don't have thermometers, but they have evolved a simple rule of thumb (or claw). They seek out soft, sandy soil, which tends to be the right temperature to produce a mix of males and females. Unfortunately, we may be setting ecological traps for the turtles. They sometimes lay eggs in yards underneath planted trees or near houses. The shadows cool the temperatures compared to sites they pick in natural habitats. On the other hand, global warming may send them in the other direction. In either case, we may cause the turtles to make too few males. And because they live so long (up to 40 years or more), they will be slow to evolve new preferences. I hope that my grandchildren will be able to come see snapping turtles rip up our garden, but I cannot be sure.