The copied gene that gave dachshunds and corgis their short legs

Compare the elegant grace of a running wolf with the comical shuffle of a waddling dachshund, and you begin to understand what millennia of domestication and artificial selection can do to an animal. As dachshunds develop, the growing tips of their limb bones harden early, stunting their growth and leading to a type of dwarfism called chondrodysplasia. The same applies to at least 19 modern breeds including corgis, Pekingese and basset hounds, all of which have very short, curved legs. 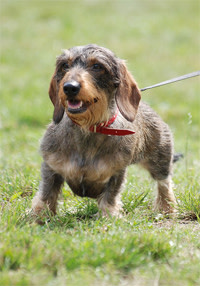 These breeds highlight the domestic dog's status as the most physically diverse of mammals. Now, a team of scientists led by Heidi Parker from the National Human Genome Research Institute have found the genetic culprit behind the stumpy limbs of all these breeds, and its one with surprising relevance for dwarfism in humans.

All cases of stunted legs in domestic dogs are the result of a single genetic event that took place early on in their evolution. Some time ago, a gene called FGF4 (short for fibroblast growth factor 4), which plays an important role in bone growth, was copied and reinserted into a new site in the dog genome. It's this extra errant copy - a retrogene - that has retarded the growth of so many domestic breeds.

Parker's team sequenced genes from over 835 dogs across 76 different breeds, including 95 short-legged individuals, and found a genetic signature unique to these stunted animals. This included a handful of genetic variants - each consisting of a single altered base pair or "DNA letter" - that were overrepresented in the short-legged breeds and that clustered in the same site. One of these variants was 30 times more common in the short-legged breeds than their long-limbed peers.

The team found that this mystery region exactly matched a gene called fibroblast growth factor (FGF4). That was puzzling, for FGF4 normally sits at a very different location, some distance away on the dog genome. In fact, Parker found that the short-legged breeds have two copies and the one associated with their abnormal growth has been inserted in an unusual site. Not only did all the stunted animals have this errant FGF4 gene, but 96% of them had two identical copies of it.

Genes that code for proteins, like FGF4, first need to be transcribed into a molecule called messenger RNA (mRNA). A group of enzymes called ribosomes "read" this transcript and assemble a chain of amino acids - a protein - based on the information it encodes. That's the usual story, but sometimes, an mRNA molecule is converted back into DNA through a process called reverse transcription; some viruses have the ability to do this.

The DNA molecule can then be inserted back into the genome it was originally transcribed from, often in a new place. But to be active, these reinserted genes need to be surrounded by the right "promoter" sequences. Without these promoters, most inserted genes just sit around doing nothing, slowly building up debilitating mutations. However, a lucky few hop back into just the right place where they can "borrow" promoters from other parts of the genome. They can go on to produce functional proteins and these active copies are called retrogenes.

Parker found clear evidence that the extra FGF4 of dachshunds and corgis is indeed a retrogene. When genes are transcribed into mRNA, useless chunks of sequence called introns are edited out of the transcript. An mRNA molecule that is then reverse-transcribed would produce a shorter, more streamlined stretch of DNA than its original gene. That's exactly what the second FGF4 of short-legged dogs is - an intron-less version of the original.

Parker's team isn't yet clear what this extra copy of FGF4 does to stunt the growth of their bearers, but they have a very good idea. They suggest that with two copies of the gene, the dogs overproduce the FGF4 protein, which docks at, and turns on, another protein called FGFR3. In humans, overactive FGFR3 is responsible for virtually every case of achondroplasia, the most common type of dwarfism. It seems that FGFR3 and its partner proteins are responsible for shortness in both man and man's best friend.

The short-legged varieties were developed in many different countries and they don't sit on an exclusive branch of the dog family tree. Nonetheless, the sequence of the FGF4 retrogene strongly implies that it arose only once, very early on in the evolution of domestic dogs and before they split into the various modern breeds.

This means that for the longest time, domestic dogs had the potential for dwarfism, which was independently maintained and nurtured by breeders all over the world. Originally, they were shaped for specific jobs like flushing out burrowing animals. Later on, breeders would have kept imposing strong evolutionary pressure on their animals to meet the conditions set by dog-breeding associations. The big question is whether a single retrogene can be as potent as force in the evolution of wild species as it so clearly has been in a single domestic one.