The Complicated History of the Domesticated Turkey 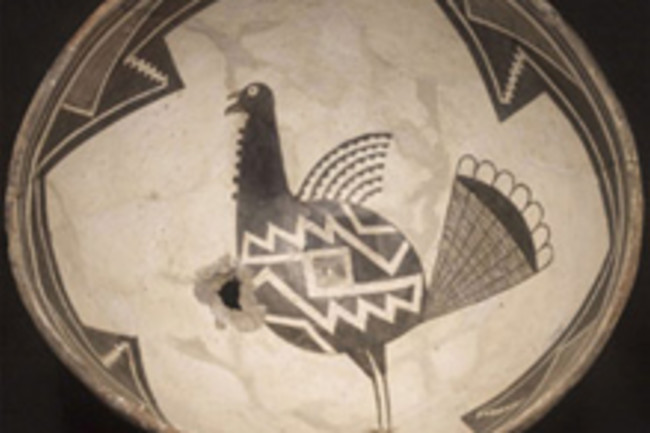 Scientists knew that the Aztec people of pre-Columbian Mexico had domesticated the turkey by the time Europeans arrived, and that those birds are the forebears of the giant birds Americans devour in gut-busting volume every Thanksgiving. But a 2010 study in the Proceedings of the National Academy of Sciences suggests that the Aztecs weren't the only early Americans to tame the turkey: People of what is now the Southwestern United States, including the Anasazi, separately domesticated the birds. Two teams that had been separately studying the bones and the fossilized dung of ancient turkeys joined forces for this find. Studying 38 different sites, they found that the Aztec peoples accomplished the feat first. But later, perhaps around 200 B.C., they saw that the people of the Southwest United States duplicated the achievement.

The two instances of domestication appear to have been separate, based on DNA analysis of ancient turkey remains. However, the different Native American groups could have been in contact with each other, sharing turkey-raising tips [Discovery News]. Curiously, the turkey population raised by people who lived in what's now the United States is distinct from the kind of turkeys that today's Americans eat.

In the 15th century, Spanish Conquistadors took Aztec turkeys back to Europe. The birds proved popular, and were bred with local subspecies before being reintroduced to North America by colonial settlers in the 17th century [Wired.com]. So while your Thanksgiving bird may trace its roots to the Aztecs, the turkeys that once roamed the Southwest United States may have gone extinct, the researchers say--or they could have living relatives in the wild turkeys still roaming around. While turkey has become a large part of the American diet beyond just holiday feasts, study leader Camilla Speller argues that these early Americans first went to the trouble of domesticating the birds for uses other than food:

"Interestingly, the domestic turkeys were initially raised for their feathers, which were used in rituals and ceremonies, as well as to make feather robes or blankets. Only later, around 1100 A.D., did the domestic turkeys become an important food source for the Ancestral Puebloans" [Discovery News].