The color of life as a coincidence 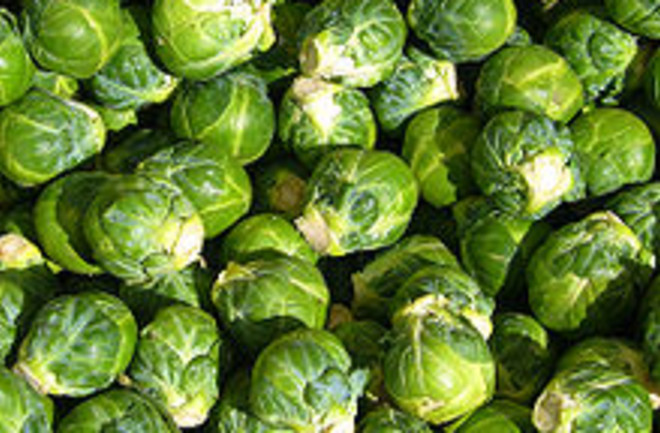 Credit: Eric HuntI do love me some sprouts! Greens, bitters, strong flavors of all sorts. I've always been like this. Some of this is surely environment. My family comes from a part of South Asia known for its love of bracing and bold sensation. But perhaps I was born this way? There's a fair amount of evidence that taste has a substantial genetic component. This does not mean genes determine what one tastes, but it certainly opens the door for passive gene-environment correlations. If you do not find a flavor offensive, you are much more likely to explore it depths, and cultivate your palette.

Dost thou dare?Credit: W.A. DjatmikoAnd of course I'm not the only one with a deep interest in such questions. With the marginal income available to us many Americans have become "foodies," searching for flavor bursts and novelties which their ancestors might never have been able to comprehend. More deeply in a philosophical sense the question of qualia reemerges if there is a predictable degree of inter-subjectivity in taste perception (OK, qualia is always there, though scientific sorts tend to view it as intractable in a fundamental sense). But there's heritability, and then there's genes. We know that perception in some ways is heritable, but what is perhaps more interesting is if you can peg a specific genomic location to it. Then the evolutionary story becomes all the richer. And so it is with the locus TAS2R16, where a nonsynonymous mutation at location 516 seems to result in heightened sensitivity to bitter tastes. More specifically, it's rs846664, and the derived T allele is fixed outside of Africa, while the ancestral G allele still segregates at appreciable fractions within African populations. A new paper in Molecular Biology and Evolution puts this locus under a microscope, though it does not come up with any clear conclusions. Origin and Differential Selection of Allelic Variation at TAS2R16 Associated with Salicin Bitter Taste Sensitivity in Africa presents some interesting findings. First, let's look at the distribution of the variation in their sample populations at the SNP of most particular interest:

As you can see T is fixed outside of Africa, and varies across many African populations  Previous work implied this, though coverage within Africa was not good. One thing to observe though is that the frequency of A within Africa can not be explained by recent Eurasian admixture. The frequency is way too high for that to be the sole explanation, and in any case there is no evidence that ~33% of the Hadza's ancestry is of Eurasian provenance (the Hadza being one of the three major groups of African hunter-gatherers, along with the Bushmen and Pygmies). Within the paper the authors resequenced ~1,000 base pairs across diverse African populations in an exonic region of this gene (the stuff that codes for amino acids). What they discovered is that of the SNPs segregating, 516 in particular was critical toward effecting phenotyping change. Not only did individuals with the T variant notably exhibit stronger bitter sensitivity, but in vitro expression with a reporter was elevated. Because they had such a dense genomic region they could perform various nucleotide based tests to detect natural selection, and, attempt coalescent models to infer genealogical history. I'm going to spare you some of the gory details at this point. Here's what they found. First, it does look like the region is under natural selection in many African populations, in particular, the derived haplotype with T at 516 at the center. But this result is not reproduced across all tests. The coalescent simulations make clear why: the mutation is an old variant with deep roots in the hominin lineage. In other words this variation pre-dates H. sapiens. It looks like the T allele has rapidly increased in frequency relatively recently, though more on the order of ~50,000 years, rather than ~10,000.* Basically around the time of the "Out of Africa" event. Additionally, there's a tell-tale sign that this is being subject to selection within Africa: the genetic differences across populations at

far exceed the genome-wide values (the Fst at this locus is in the top 1% of loci within the African genome). Finally, one should note that the G allele haplotypes seem to be much more strongly constrained, as if they're under purifying selection. This means that the switch to T is not all gain. At this point you may be ready for a story about how some African populations, like Eurasians, underwent a lifestyle change, and diet changes resulted in a shift in sensory perception. That does not seem to be the story. Rather, the authors did not seem to be able to agree upon a neat explanation for what is driving these recent sweeps up from ancient standing genetic variation. They do observe that the variation does tend to cluster geographically, more so than the genome-wide results would imply. There's likely some adaptation going on, they simply don't know what. In the introduction and elsewhere you can see that variation at

does correlate with other traits. Not too surprising due to the relatively ubiquity of pleiotropy; one gene with many effects. Stepping outside of the implications of this specific result, let's think about what might be a takeaway: something as essential as taste perception might be a side effect of other aspects of evolutionary processes. In other words, we don't know what the phenotypic target of selection is in this case, but we do have a good handle one of the major side effects, which is sensory perception. How one tasteseems like a big deal.** Andthere have been many theories propounded that variation in bitter sensitivity is due to adaptation to poisonous plants and such, but really no one knew, and that was just the most plausible of low hanging fruit. With these results from Africa, where there is more variation in the trait and genes, and good geographic coverage, that seems to be an implausible model to adhere to (one would think the hunter-gatherer Hadza would exhibit the most sensitivity, no?).

Many of the traits and tendencies which we humans see as fundamental, essential, and of great import, many actually be side effects of powerful evolutionary forces hammering at the genetic-correlation matrices which define the hidden network of co-dependencies within the genome.

So there, I said it. Life is an accident. Enjoy it. Citation: Campbell, Michael C., et al. "Origin and Differential Selection of Allelic Variation at TAS2R16 Associated with Salicin Bitter Taste Sensitivity in Africa." Molecular biology and evolution (2013): mst211. * If it was closer to ~10,000 I think haplotype based tests would come back with something, but they do not. ** Some Epicureans might be accused of reducing the good to taste!