The Clock That Breeds 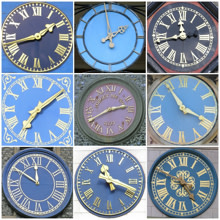 We humans spend a lot of time building tools out of pieces of the natural world. We started with sticks and stones, began to mine iron and other metals, and, just recently, learned how to manipulate the genes of living things. To make insulin, for example, biologists in the 1970s inserted human insulin genes into E. coli and turned the bacteria into living chemical factories. These days, scientists are trying to retool bacteria much more dramatically, treating them more like programmable computers than factories. It sounds simple enough, but it most definitely isn't. All material pose challenges to tool-makers. Wood can rot, metal can buckle. And living things are maddeningly sloppy. That's why it's so impressive that scientists at the University of California at San Diego have just made the movie I've embedded below: glowing bacteria keep time with their blinks.

Technology relies on uniformity and reliability. If your computer's clock rate

changed unpredictably from second to second, you wouldn't be able to read this or do much of anything else with your machine. But living things did not evolve to please engineers. They are fundamentally messy systems of molecules. Even the simplest chemical reaction in a cell is an engineer's nightmare. If you expose E. coli to certain kinds of sugar, for example, certain genes become active, leading the microbe to make RNA copies of the genes, and ultimately proteins, which the microbe can use to eat the sugars. But the microbe doesn't make a smoothly increasing supply of the proteins. It makes them in unpredictable bursts. The microbe is noisy because its molecules do not react with each other like clockwork. They are governed by laws of probability. They quiver and wobble. They grab onto their targets and then fall off, only to grab on again. And because there are many stages from a signal to the production of a protein, the sloppiness at one step adds to the sloppiness of the previous ones. Biologists who practice synthetic biology would like to manipulate E. coli and other cells in the same way they manipulate microprocessors. They'd like to sketch out a genetic circuit that carries out a certain operation--such as invading cancer cells and killing them from within--and plug those genes into a cell and have it immediately do their bidding. But as I write in my book Microcosm

, the messy, murky workings of real cells makes this kind of immediate success very rare. Scientists have to tweak their circuits, sometimes randomly introducing mutations to let natural selection do what they can't. And so synthetic biologists are only just starting to figure out how to rewire cells to do things that a kid with an electronics kit can figure out in a few hours--like making lights that flash at a certain rate.It's easy enough to make E. coli flash. All you have to do is insert a gene from jellyfish for a glowing protein, along with a segment of DNA that other proteins can bind to in order to switch the gene on. (The discoverers of this gene won the Nobel Prize

this year.) Making the bacteria get brighter and dimmer in a regular cycle isn't so easy, though. Early attempts led to bacteria that flickered and drifted out of sync. Scientists at the University of California at San Diego set out to create a model of a clock that kept better time. They took advantage of the fact that many genes shut other genes down, and many other genes speed up the production of proteins from other genes. The scientists sketched out a set of genes that they could switch on by adding a sugar called arabinose. A positive feedback loop would begin, creating more and more glowing jellyfish protein. But after a delay, the microbe would start making proteins that would shut the production of glowing proteins down. (The figure here is a schematic diagram of their circuit.) On paper, the circuit seemed like it ought to work as the scientists hoped. They assembled the genes onto rings of DNA called plasmids and inserted them into E. coli. The bacteria began to glow in pulses, and those pulses carried on smoothly from one generation of bacteria to the next. But the scientists were surprised to find that in some ways the bacteria were behaving in ways the model hadn't predicted. Adding more arabinose made the clock run slower. Even more strange was the fact that the clock was reliable under a wide spectrum of conditions. It runs reliably whether the bacteria are cool or warm. The bacteria flash in regular cycles whether they are breeding like mad several times an hour, or less than once an hour. The model suggested that the clock should only work if the conditions were carefully managed. So the scientists revised their model. To make it match reality, they had to add lots of new details to it, such as the rate at which proteins and RNA are destroyed. In some ways this

is bad news. Synthetic biologists will not be able to get away with simple models of the input and output from their manipulated microbes. The good news is that now scientists have invented a bacterial clock that can be tuned to work at different cycles, and do so reliably. Instead of producing light, microbes might produce time-released medications, or some other substance that has to be created at intervals. It may even help scientists understand the feedback loops in our own bodies that produce steady rhythms over the course of minutes, hours, or days. Someday our own inner sloppiness may no longer be such a mystery. Movie courtesy of Jeff Hasty, UCSD Image from Leo Reynolds, Flickr