The Cholera Tree of Life (and Death)

The nightmare that is the cholera epidemic of Haiti (2,100 dead so far) has become a little less mysterious. Haiti has not seen cholera for over a cenutry, and so the emergence of cholera in recent weeks has puzzled scientists and led to riots directed at the U.N. for supposedly bringing Vibrio cholerae to the Caribbean nation. Others have pointed to a New World strain as a potential culprit. It triggered an outbreak in Peru in 1991, and has circulated in Central and South America ever since. Perhaps these bacteria washed up on Haiti's shores. In the latest issue of the New England Journal of Medicine, Matthew Waldor of Harvard and his colleagues go some distance to settling the debate by finding the Haitian cholera's place in the tree of life. 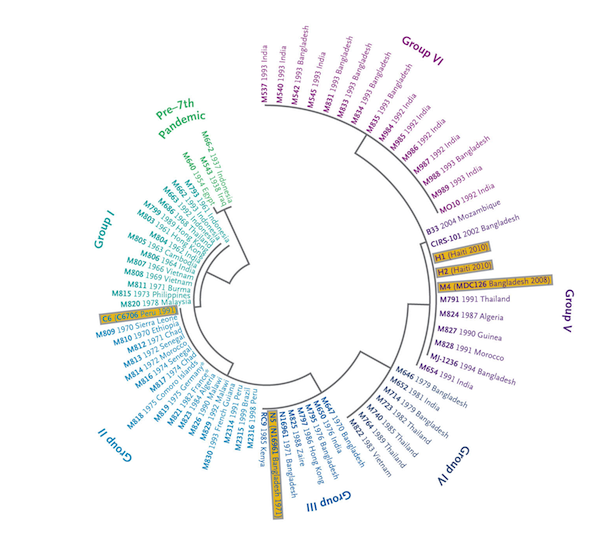 "Collectively, our data strongly suggest that the Haitian epidemic began with introduction of a V. cholerae strain into Haiti by human activity from a distant geographic source," the scientists write. The bacteria belong to a strain that evolved in South Asia. It was probably introduced onto Haiti by a sick person who flew there. We may never know who made the delivery, but it was a terrible blow not just to Haiti but perhaps to other New World countries. The South Asian strain is, unfortunately, deadlier than the Peru strain and resistant to antibiotics to boot. Waldor and his colleagues warn that unless the bacteria are stopped now, they could outcompete the milder Peru strain. "Clearly, the provision of adequate sanitation and clean water is essential for preventing the further spread of the Haitian cholera epidemic," they write. Let's hope we can prune future branches of this deadly tree.