The Chicken-hearted Origins of the 'Pecking Order' 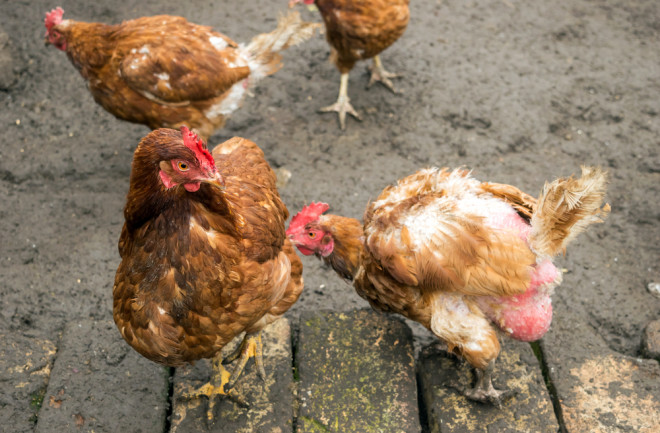 A chicken gives another a peck. (Credit: tryptophanatic/Shutterstock) At the turn of the twentieth century, a young Thorleif Schjelderup-Ebbe began vacationing with his wealthy parents, both sculptors, at a country retreat outside Kristiania (now Oslo), Norway, where he immersed himself in the lives of birds in the barnyard. He gave them names, closely watched how they behaved, and learned how to recognize one from the other. He “became terribly interested in chickens, terribly interested,” Schjelderup-Ebbe’s son Dag recounted in 1986 in an interview published in Human Ethology Bulletin. Schjelderup-Ebbe tended the chickens at the summerhouse from the age of six. They obsessed him, and even during the winter he would travel to visit them and catch up on their lives. When he was 10, he started filling a notebook with diagrams capturing the social status of the feathered population of the farmyard. He discovered hierarchies, and he began tracking their patterns of behavior.

Order in the Coop

Thorleif Shjelderup-Ebbe (Credit: Wikimedia Commons/CC BY-SA 3.0) Chickens, Schjelderup-Ebbe observed, rank themselves in predictable ways. The rankings emerge from squabbles over food, and when a chicken finds itself defeated in a dispute, it will forever submit to the winner. Each member of the flock understands who ranks above and below it, and Schjelderup-Ebbe called the highest-ranking chicken the “despot.” Dominant chickens remind their subordinates of their relative social status with a painful peck. He believed that this acceptance of hierarchy is inherited, not learned. From this avian system of hierarchy, we get the term “pecking order,” which Schjelderup-Ebbe coined. In the decades that followed, his research on chickens would grow immensely influential. Other investigators built upon Schjelderup-Ebbe’s findings to open new research in such areas as the intelligence of chickens, the social hierarchies of dark-eyed juncos and other birds, social rank in cattle and macaques, and the behavior of many other highly social organisms, including humans. It became clear that social dominance is a feature of the lives of creatures throughout the animal kingdom. Konrad Lorenz — considered one of the fathers of ethology — cited the influence of Schjelderup-Ebbe’s work on his pioneering research, and the 1973 Nobel Prize in physiology or medicine went to Lorenz, along with Karl von Frisch and Nikolaas Tinbergenfor, for their studies of patterns of social behavior. “I said to [my father], you should have had this!” Dag declared in the 1986 interview.

Struggling With the Pecking Order

Strangely, before Schjelderup-Ebbe, nobody had paid much attention to the social practices of chickens, or other animals. The Norwegian’s early efforts to find research on chicken hierarchies had turned up nothing. As he grew older, his fowl obsession only intensified. At the age of 19, he wrote a paper titled “The Voices of Chickens: A Contribution to the Psychology of Chickens.” Then, as a university student, he came under the influence of the zoologist Kristine Bonnevie, the first woman professor in Norway. At this point, Schjelderup-Ebbe sadly found that his mastery of the social hierarchies of chickens offered no guarantee that he could navigate the social hierarchy of humans. When another student wrote a newspaper article that cruelly lampooned Bonnevie, someone — “some enemy of my father,” Dag said — falsely told her that Schjelderup-Ebbe was the miscreant author. Bonnevie would not believe his protestations of innocence, and she dropped her support of him. “So he broke away from the University and had no chance of getting a job in Norway from that,” Dag lamented. “She was always his antagonist and would always work against him.” Schjelderup-Ebbe exiled himself to Sweden and Germany to finish his education and earn his Ph.D., and he wrote a dissertation on his specialty titled “Gallus domesticus in Its Daily Life.” It was based on his childhood study of chickens. Not until around 1925, when Schjelderup-Ebbe was in his early 30s, did he return to Norway. There, the academic social hierarchy worked against him. Bonnevie and her allies blocked his attempts to gain a Norwegian Ph.D. “It destroyed him, actually, but he recuperated … It was most unfair,” Dag observed. An honorary doctorate years later from the University of Copenhagen somewhat mitigated Schjelderup-Ebbe’s low position in the academic pecking order. “But that was in Denmark. He really felt downtrodden — justifiably so — by the people who didn’t like him,” reported his son. Despite his lowly status in academic science, Schjelderup-Ebbe greatly influenced the study of social hierarchies in other animals. His dominance hierarchy is now thought to apply to such varied organisms as insects, fish, and primates. If only he could have learned how to navigate human hierarchies in his own life.