How will marine life respond to ocean waters  that are growing ever more acidic? In a remote  Norwegian fjord, scientists are finding out  by simulating the corrosive seas of the future. 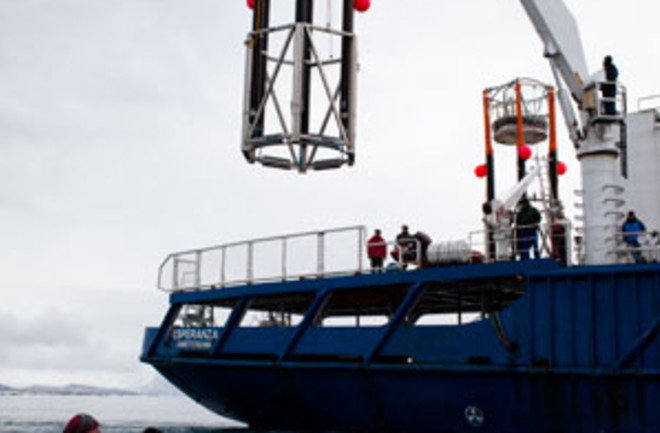 The Greenpeace vessel Esperanza unloads one of the nine enclosures known as mesocosms (literally “midsize worlds”) used in the acidification experiments. Developed by biological oceanographer Ulf Riebesell of the Leibniz Institute of Marine Sciences in Germany, the mesocosms consist of a buoyant frame and a 65-foot-long polyurethane bag that encloses plankton and other small marine organisms. | NULL

This past summer, 35 oceanographers and marine biologists from Europe and Asia trekked to Norway’s Spitsbergen island, about 750 miles from the North Pole. Then they kept going, right into the water, and set up an elaborate system of underwater test tubes. Their mission was to study how the abundant marine life in these frigid waters will bear up under the stress of one of the world’s most daunting, if least publicized, environmental threats: the rising acidity of the oceans.

As carbon dioxide levels in the atmosphere increase, the seas absorb greater amounts of the gas, which reacts with water to form carbonic acid. Surface waters today are 30 percent more acidic, on average, than they were at the start of the Industrial Revolution. And unlike the storms, droughts, and heat waves that might be spawned by climate change—which are difficult to measure and predict﻿—ocean acidification advances with disconcerting regularity. The most conservative models forecast that the ocean will be twice as acidic as in preindustrial times by the end of this century. “In the past 200 years, we have manipulated seawater chemistry at a rate that has not occurred for at least 20 million years,” says oceanographer Jean-Pierre Gattuso, coordinator of the European Project on Ocean Acidification (EPOCA) and a lead scientist on the Spitsbergen experiments.

Previous episodes of acidification— possibly caused by CO2 released from huge, sustained volcanic eruptions—had a tremendous ecological impact. “We know that past acidification events played a role in mass extinctions, when lots of animals and plants disappeared from the ocean,” Gattuso says. “Life is flexible, so some organisms were able to adapt and evolve. The worry today is that the change is happening so fast that many may not have time to adjust.”

The science of how soured waters will affect marine life is still young, but the evidence so far suggests that the hardest hit will be organisms that have shells or skeletons built from calcium carbonate, including corals, mollusks, and many plankton. Acids dissolve carbonate, so as pH levels in the world’s oceans drop, these animals may have trouble maintaining their body parts.

Spiked plastic roofs for the mesocosms prevent seabirds from landing on them. Norway’s Svalbard archipelago hosts some 150 bird species, including the Arctic tern, which makes the longest migration of any animal (nearly 45,000 miles to the Antarctic and back). The tern feeds on plankton that may be affected by ocean acidification. | NULL

“The thing that’s really unknown is how marine ecosystems will respond,” says National Oceanic and Atmospheric Administration marine biologist Ned Cyr, who chairs a government task force that is developing a coordinated national plan to monitor the problem. “In the ocean, everything eats everything else. If we start losing key prey species, we may find ourselves with all kinds of unexpected effects.”

Gattuso and his colleagues set up the Spitsbergen experiments to investigate those effects. In the largest study of its kind, the group has monitored the reaction of species at the base of the marine food web—viruses, bacteria, microscopic plants called phytoplankton, and their animal counterparts, zooplankton—to various degrees of acidity. The results will allow scientists to predict how ocean life will respond to CO2 levels that have been projected to rise 40 percent over the next two decades.

A recent United Nations report cautions that with more than a billion people worldwide relying on seafood (pdf) as their primary source of protein, acidification could pose a major threat to the human food supply. “The obvious solution to the potential threats posed by acidification,” the authors say, “is to make rapid and substantial cuts to anthropogenic CO2 emissions.” Gattuso and his colleagues hope to find out how big and fast those cuts will have to be. “The goal,” he says, “is to determine whether there is a tipping point that we do not want to reach.”